It is a misconception that land and buildings transaction tax additional dwelling supplement does not apply to a main residence, and purchasers can be caught out by anomalous rules
20th September 2021 | Bob Langridge

In short: yes, and more often than you’d think.

Ostensibly, ADS is a tax designed to increase the costs of second home and buy-to-let purchases. In practice it does not function like that. It is full of odd consequences, lopsided rules and ineffectual provisions. It is a common misconception that ADS does not apply to a main residence.

All the examples below are drawn from experience – some of which, I’m sure, will be familiar to readers.

The key points to take away are:

When an individual buys a dwelling in Scotland, the central test for ADS can be broken down as follows (graphic): 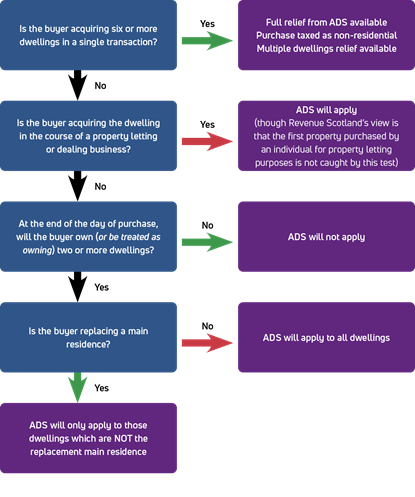 In 2010, Edgar and Lenore bought their marital home in joint ownership. They separated in 2017. Edgar moved out of the marital home but kept his half share.

Edgar rents until June 2021, when he decides to purchase a new home. He is advised that he needs to pay ADS on the purchase price. His lingering interest in the old family home catches him under the “two or more dwellings” test, covered in the flowchart.

To recover the ADS, he agrees to sell his half share in the family home back to Lenore in July 2021. Having disposed of his previous main residence, he applies to Revenue Scotland for a refund and his application is rejected.

Unfortunately for Edgar, Revenue Scotland applied the law as it stands. To qualify for repayment, Edgar needs to have both disposed of his old home within 18 months of buying the new one, and lived there as his main residence in the 18 months before buying his new property. He has fallen foul of the second criterion, so the ADS charge sticks.

The issue here is that ADS does not differentiate between Edgar’s interest in his marital home – from which he derives no economic benefit (like rents) or residency – and a buy-to-let or second home. But intuitively it is different.

Following the breakup of her marriage, Lavinia moves in with her partner, Wilbur. Lavinia owns a half share in her previous marital home; Wilbur owns nothing. They rent for a few months and buy a flat together, a year after Lavinia moved out of the marital home.

Lavinia and Wilbur pay ADS on their purchase. Two months later, Lavinia and her ex-husband sell the marital home and split the proceeds.

Can Wilbur and Lavinia reclaim the ADS they paid? No – for they have not lived their lives according to the bizarrely prurient strictures of the ADS legislation. They can only reclaim if they had lived together “as though married to one another” in Lavinia’s previous marital home. They (understandably) did not, so they cannot.

Note that if Lavinia had bought the flat in her sole name, her reclaim would have been fine. If there were no secured debt, she could even transfer a share to Wilbur the next day.

A version of this problem also arises for couples who each own property and decide to live apart until they are married.

Greg and Elmer both own properties separately (acquired while single). In 2018 they move in together at Greg’s flat, keeping Elmer’s as a rental property. In 2020 they move homes and fund the purchase by selling Elmer’s home. After they move, they will let Greg’s flat.

Again, ADS is payable on the new purchase. The “two plus dwellings” test is met (the new house plus Greg’s flat) and they are not replacing a main residence.

That seems uncontroversial. But on slightly different facts they wouldn’t have had to pay ADS. If they had sold Greg’s flat and retained Elmer’s then ADS wouldn’t apply, as they’d be replacing a main residence. Likewise, if they lived in Elmer’s flat for a year and then moved into Greg’s, Elmer’s flat would have been a main residence in the 18 months before the purchase and the exemption would apply.

The issue in scenarios 2 and 3 is that ADS is too prescriptive when dealing with the complex and messy world of relationships. It only recognises a few very restricted methods for doing things. Fall outside of those and ADS applies. Again, this feels intuitively (and morally) wrong.

Scenario 4 – the complexities of buying a granny flat

As first-time buyers, Fran and Dan are astonished to learn that they are liable to pay ADS. After all, they will own two dwellings: the main house and the granny flat. Unlike SDLT, LBTT contains no granny flat exemption and so the ADS applies to the full price of £400,000.

Compare this with Sue and Sam. They are buying an identical property (house with granny flat, same price apportionment, a different mother). The difference is that they are not first-time buyers: they have a home to sell.

Here, ADS does not apply. They are only liable for the basic LBTT of £13,350. If they claim multiple dwellings relief, the LBTT is arguably reduced to £3,337. Sue and Sam end up paying almost £15,000 less than first-time buyers Fran and Dan.

Why? Because of how the £40,000 threshold for ADS applies. Fran and Dan are not replacing a main residence, so all dwellings in their purchase are considered. If the total price is more than £40,000, ADS is triggered. Sue and Sam, however, can exclude the £370,000 attributable to the replacement main residence. As the granny flat only has £30,000 attributed to it, ADS isn’t triggered.

The issues here are:

Ron’s parents are farmers. They operate their farms via a partnership, which owns the underlying land, including several cottages occupied by farmworkers. Ron is assumed into the partnership with a 5% share, with the intention that he will gradually take over from his parents.

Later on, Ron buys his first and (at that point) only house – and Revenue Scotland assess that ADS is due on the price. But why? Under the LBTT partnership rules, he is treated as owning the underlying partnership property, including the workers’ cottages. Those dwellings are counted under the “two plus dwellings” rule, so Ron must pay ADS. He has no prior main residence to dispose of, so the ADS cannot be recovered.

The issue here is that LBTT contains two complex sets of provisions (partnerships and ADS), which do not interact with each other sensibly. It also shows that even a low value interest in another property – which provides no significant economic or other benefit – can cause serious ADS issues.

In some areas of tax – the inner plumbing of cross-border investment funds for example – this is probably fine. But it isn’t okay in the context of housing. Very few people regularly set up cross-border funds; many will buy at least one home. If a bit of the tax system impacts most people, then it should be structured in such a way that it can be quickly understood, and accounts for the way in which lives are led in modern society.

Fortunately, the Scottish Government has committed to a consultation on revising ADS. Looking ahead to that consultation, I’d suggest the following changes, as a minimum:

More generally, all of this is an object lesson in the need for a better system for passing and scrutinising Scottish tax and making changes to it, such as an annual Finance Bill. When the ADS consultation begins, I’d encourage all practitioners to make submissions around issues they’ve encountered, either to the Scottish Government, or via the Law Society of Scotland. 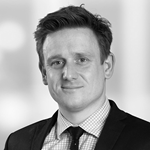