The patchwork of legislation regulating the profession has too many holes. The Society has submitted proposals to the independent review that we believe would help make our legal services world class
19th February 2018 | Graham Matthews

It’s over 12 years since I became a Law Society Council member. Since then, I have seen two new pieces of legislation come into effect which govern legal services – one in 2007 and one in 2010. Prior to that was the 1980 Act, which still impacts the way solicitors are regulated and how we run our businesses. All of them have their flaws. That’s why the Society is calling for radical reform of legal services regulation.

Back in 2005 the Scottish Legal Complaints Commission (SLCC) did not exist. I clearly remember one of the first issues I was involved in debating as a Council member was about introducing an independent complaints system. Back then the Society dealt with both conduct and service complaints. Fast forward to 2018 and we have an independent complaints system which is overly complex, expensive and lacks proper oversight. This is what we have said in our recent submission to the Scottish Government’s independent review of legal services regulation, in which we call for a radical overhaul of regulation. We have also called for expanding consumer protections to currently unregulated areas of legal services; protection of the term “lawyer” to mean those who are legally trained and regulated; and new powers to suspend solicitors suspected of serious wrongdoing. We also believe there should be better regulation of legal firms as entities in addition to the regulation of individual solicitors, to protect consumers better. You can read our full submission to the review group on our website. [See also Wishlist for the review, February 2018 – Editor.]

ABS – approved but not authorised

Another hot topic up for discussion, in my early days as a Council member, which would impact future legislation was alternative business structures (ABS). At the time I was not in favour of ABS – which these days are also referred to as licensed legal service providers. The prospect of non-lawyers owning or investing in legal practice seemed bizarre to me back then. But after a packed Society annual general meeting and much debate, members voted in the majority for it and so the Legal Services (Scotland) Act 2010 was born – with many flaws.

So, rather than complain, I accepted change was inevitable and, I’m sure like many others, came up with a cunning plan, to create an alternative business structure mostly owned by solicitors but having our practice manager and financial services director as profit-sharing members. The theory was that this could lead to efficiencies and major cost savings.

The Society was an obvious regulator of licensed legal service providers, given we regulate solicitor members. We worked with the Scottish Government to produce a new regulatory scheme, and our rules were consolidated in 2011 to enable these also to be applied as part of our regulatory scheme. The winds of change, though, are sometimes more akin to a gentle waft than a force 10 storm, and so having got a scheme agreed it was only in early 2017 that after the consent of the Lord President, Scottish ministers approved the Society as the only currently approved regulator.

But that’s not it, because not only do we need “approval”, we also need to be “authorised” before we can start to take applications from firms to become a licensed legal service provider. And to be authorised there has to be a scheme in place for the regulator’s overseer, which is the SLCC. It needs to budget for that, albeit there is nothing as yet to do. But the SLCC can only consult on budget at certain times of the year. So now in 2018, the SLCC has just published its draft budget for this year. It includes £20,000 for the approved regulator levy for year one, even though the Society has not been authorised to do anything. The big question is, who should pay that £20,000?

The 1980, 2007 and 2010 Acts are a patchwork of legislation with holes. We believe our proposals to the independent legal services review calling for radical new legislation are the solution to make Scotland’s legal services world class.

The Author
Graham Matthews is President of the Law Society of Scotland – president@lawscot.org.uk; Twitter: @grahamgmatthews
Share this article
Add To Favorites 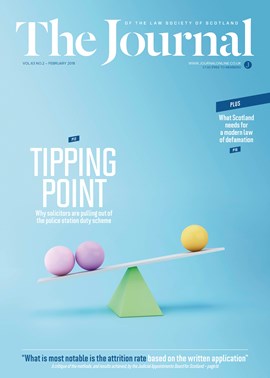