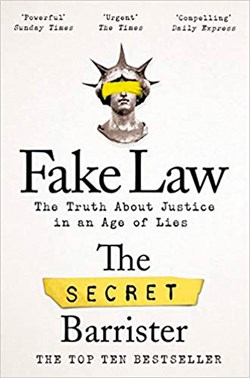 This is the second book penned by the junior criminal barrister who writes under the nom de plume “The Secret Barrister”. As I wrote in 2018 when I reviewed the first, subtitled Stories of the Law and How It's Broken, I'm fairly certain it's a he. I'll proceed accordingly, referring to the author as SB. Do remember that SB is describing the system from a background of English law; do not for one moment think that things are any better here in Scotland

This work is broader in scope, covering private law issues such as family and employment, widening out to human rights, access to justice and democracy, and reprising in part the previous volume when considering liberty, equality and due process. SB's central theme, one which should resonate with all lawyers, is his concern that many citizens feel irredeemably disconnected from the legal system and its players.

His aims, in summary, are to examine some of the core principles of our legal system, and to consider them in practice, the better to be able to examine critically the stranger-than-fiction harrumphs of the professionally outraged. If I may digress, that last phrase, or more particularly its style, marks an important difference between the two books. SB has relaxed sufficiently to emerge from lawyerspeak, to allow a bit of his own personality to enter his writing. It in no way detracts from the seriousness of the message – and who can fail to applaud someone who (correctly) identifies My Cousin Vinnie as the world's greatest ever legal film?

Legal principles are succinctly explained, then the grotesque travesties of them, voiced usually by politicians (of all parties) and the media (again, from both sides), are expertly dismembered. To those who scream that established legal principles shouldn't apply to egregious cases, be they greedy bankers, asylum seekers or child murderers, SB applies the quiet voice of reason. If you try to remove fundamental protections from X, how can you complain when the system tries to do the same to you or yours?

As can be gathered from the title, this book is as timely as it is important. Which one of us lawyers, who really ought to know better, can say hand on heart that we have never been swayed by the Court of Public Opinion? Read this and reflect – and promise to shout what we know to be right, back in the faces of those who peddle Fake Law.

The epilogue contains some possible answers to the problem. Whether any of them will gain traction, I know not; however, I am 100% with SB in his wish that every student (at whatever level), every journalist and every politician should understand the principles of our legal system, and that the politicians in particular ought to understand fully the practicalities of the laws they make.

Walker and Walker: The Law of Evidence 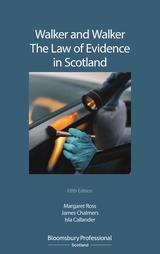 This edition contains the introduction to the first edition produced by the Sheriffs Walker in 1964, with contributions from Dr (later Sheriff) Peter McNeill, a raft of procurators fiscal, and Joseph Mellick, then lecturer at Glasgow University. The text remains the leading one on evidence and this latest edition will assuredly ensure it remains so. Renton and Brown has a chapter on evidence, and that and the work by Sheriff (latterly Lord) Macphail bring their own value, but this text provides a detailed and thorough analysis of the law of evidence.

It may appear unusual to say, but the discussion of the detail of the law of evidence has become increasingly written in the area of sexual offences and the operation of the procedural “rape shield” provisions contained in ss 274 and 275 of the Criminal Procedure (Scotland) Act 1995. This is a current area which causes practitioners real difficulty. The authors provide an admirably thorough analysis of the case law. They make the point that there is no rule which makes evidence of prior sexual conduct between the accused and complainer inadmissible, but rather it requires to have connection between what the court regards as two unrelated events. They then discuss the operation of the rule that admissible evidence of such conduct (and wider attacks on the complainer's character) may only be led where the statutory conditions of ss 274 and 275 are satisfied.

Of course, this text addresses both civil and criminal law, and each aspect of the law of evidence is viewed through the prism of their respective areas. Another area of daily practice of those in criminal law is the use of special measures for vulnerable witnesses. The authors provide a comprehensive overview of each of the measures with reference to case law, and again make the point, which while trite is worth reinforcing, that the court can regulate its own procedure in such a way as to provide the witness with some degree of special measure at common law, conditional on the fairness of the trial not being impugned.

There are some who see a distinction between the rules of evidence and the law of procedure. The authors by their analysis of the law of evidence demonstrate that each area is dependent on the other. This book eases the path to enlightenment in areas of daily practice.