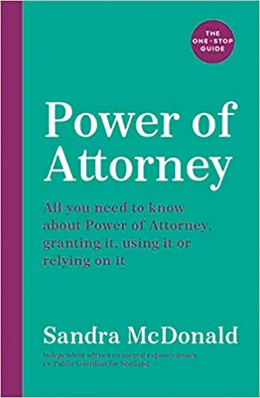 One chapter of this book is required reading for all practising lawyers. Any who in any way act or advise in relation to powers of attorney would benefit from reading the book, and are likely to find parts of it helpful for reference. That said, it is not a technical book for lawyers, and should be neither read nor reviewed as such. There is a tradition firmly established over several decades now, of Scottish authors on mental health, adult incapacity and related areas of law of writing also, or entirely, for non-lawyers. There is also a lesser, but clearly discernible, tradition of writing for more than a Scottish readership. As the latest example of authorship in both of those traditions, this book excels.

The dominant impression for any reader of its 328 pages – in an easy, almost conversational style yet packed with so much information, practical guidance and thoughtful wisdom – is: what a huge gap it fills! One may not have realised the size of the gap until one read it, but it was worth waiting for. Sandra McDonald served for 14 years as “the” Public Guardian (the first office of that name to be established in the United Kingdom, and thus senior to its namesake in England & Wales), accumulating vast experience of all the questions and issues raised with her Office under its statutory functions of registering documents, investigating, and providing information and advice.

On the very first page she encapsulates all the tales of woe from attorneys encountering unexpected obstructions and difficulties. On the second page she tells the story of her father's developing dementia. She was his attorney. She was struck that she “had none of the issues that, in my professional life, I was still hearing so many complaints about”. Why? Because: “I was empowered: I knew what I could and couldn't do as attorney and what I was and was not entitled to, and how to assert my authority, to whom and when.” The mission of her book is to empower every attorney to achieve the same.

Carefully and sensibly, however, the book does not start with guidance on acting as an attorney. It describes what a power of attorney is, and the importance of having such a document. It does not mention the commotion caused by the negative comments of retired Senior Judge Denzil Lush on the BBC Radio Four Today programme on 15 August 2017, heralding the publication in England of the eighth edition of Cretney and Lush on Lasting and Enduring Powers of Attorney, but in a careful, straightforward and balanced way it provides the perfect antidote to that negativity.

Although she does not say so in as many words, the book adheres to the philosophy that the best solution to issues that may arise once a power of attorney is in operation is to get it right at the outset: selecting the powers, selecting the attorney(s), and above all ensuring that all concerned know what it is about, what to expect, and what will be expected. One recalls the advice to the prudent mountaineer: “Never put your body in a place that your mind hasn't been to first”.

The book concludes with a chapter written for those to whom powers of attorney are presented, and who will be required to act upon them. That of course is where so many difficulties arise. Writing as ever with a light touch, the author advocates a well prepared and helpful approach to such interactions, but discourages attorneys from being blocked from discharging their duties properly. She comments, for example: “Use your learning from this book to give you the confidence to insist on the professionals respecting the rights of the donor/granter of the PoA in allowing you to be involved in the conversations and decisions”.

The book is written for readers throughout the United Kingdom, in the case of Northern Ireland on the basis of legislation yet to be brought into force. The book is most distanced from a legal textbook in the simplifications, at expense of detail, required both for a lay readership and for drawing three jurisdictions together as far as can reasonably be done. Solicitors can expect to be consulted by relatively well informed clients, for whom more precise explanations of the law relevant to particular circumstances will be required than, for example, a simple statement that an attorney cannot be empowered to consent to, or refuse, treatment for a mental disorder (p 40 – see the more precise terms of s 16(6) of the Act of 2000); the topic of inheritance tax planning (pp 234 et seq – where the professional adviser obviously requires to bear in mind McDowall’s Executors v IRC [2004] STC (SCD) 22); that differences with a medical team may require to be resolved by a court decision (p 270 – the dispute resolution procedure under part 5 of the 2000 Act is not mentioned). These are not criticisms of the book: they delineate the boundary of lay learning from such a book, beyond which professional skill is required.

To ensure that they are meeting their professional obligations, including in safeguarding the rights of vulnerable people and ensuring their access to legal services in a manner that does not discriminate on the basis of disabilities, all practising lawyers should read chapter 7 on “Supporting decision-making and respecting rights, will and preferences”. Commendably, the author avoids being drawn into confusing academic debates that present “supported decision-making” and “substitute decision-making” as opposites, and addresses instead the real-world practicalities of the unifying requirement of the UN Disability Convention to support the exercise of legal capacity; and the requirement for safeguards to ensure respect for the “rights, will and preferences” of people with disabilities (articles 12.3 and 12.4 respectively of the Disability Convention). She does use “supporting decision-making”, but makes clear that this covers acting as well as deciding. This is where the practical approach of this book has relevance, in varying degrees, to all interactions with clients and others.

Lawyers who ever act or advise in relation to powers of attorney are likely to find helpful, used as quick checklists, the various lists – generally in bullet-points – of matters such as powers that might be useful; factors to consider in establishing a person's suitability to be attorney; factors that can affect the quality of decision-making; the practicalities of providing support; resolving conflicts among rights, will and preferences; guidance for suitable record-keeping; criteria for when it might be appropriate to make gifts; questions to ask at an initial meeting with a banker; points to consider when proposing to dispose of an asset (or in some cases, to retain it); making care decisions; managing communication; managing conflicts; and creating a helpful statement of wishes and feelings.

The book is relatively conservative in that it does not discuss concepts as yet underdeveloped in Scots law, such as co-decision-making, and “true” advance directives (i.e. those extending to far more than end-of-life decisions). The relevance and accessibility of the book are hugely enhanced by the multiple real life examples, and the fundamentally caring ethos of an author who at heart remains a trained nurse, as exemplified in the concluding section of the lengthy chapter on “Being an attorney” – the section headed “Taking care of yourself”. 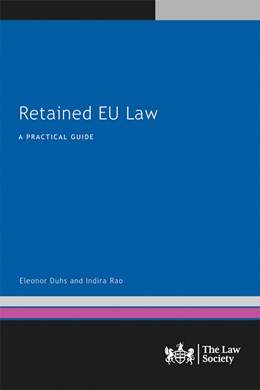 Retained EU law is a new and unique concept in UK law. Designed to ensure continuity and legal certainty, it is the snapshot of the EU law applicable in the UK at 31 December 2020 that has been made part of domestic UK law and amended to make it work in a purely domestic context. It will evolve as a unique and enormous body of law with its own peculiarities. It will affect many areas of legal practice. Conceptually straightforward, given the subject and the British legislative style the reality is complicated. The magnificent cavalry charge of amending statutory instruments complicates it further.

It is an important new legal topic. This timely book by two experts is most welcome. Eleonor Duhs and Indira Rao were the lead lawyers at the Department for Exiting the EU on the European Union (Withdrawal) Act 2018 and the then Foreign and Commonwealth Office on legal issues arising from the UK's exit.

The legislation is convoluted, with subtle distinctions and easily overlooked consequences. This slim, concise and very readable volume unpicks the complexity to explain what has been retained (and what hasn't), how it is to be interpreted, how it can be amended, how it can be challenged or enforced (or not), and what the implications are.

The book has a logical structure, a clear prose style, an excellent table of contents and many practical illustrative examples. Each chapter has an overview and helpful subheadings. The result is clarity.

It starts by succinctly summarising the different types of EU law, and key concepts such as direct, horizontal and vertical effect, fundamental rights and competence. This is necessary to understand what has or hasn't been retained. It is also a good refresher or indeed introduction for those in need.

Without entering into the merits of policy choices the authors give valuable insights into why directives were not retained, the fundamental consequences of the differing categorisation of different types of retained EU law, and the new restrictions on the use of general principles. A detailed appendix compares rights under and without the Charter of Fundamental Rights.

The chapter on interpretation of retained EU law is particularly instructive. This will be a challenge as the law is amended over time by UK legislation, with different interpretative approaches applying to different parts of the same piece of legislation.

The devolution chapter helpfully records the tensions about competences, the Continuity Bills, the Sewel Convention's breach and the common frameworks project. Future editions will have more to cover.

This new area of law will not be temporary, nor will it get simpler. This is an invaluable practical guide.