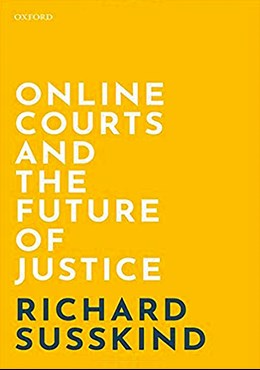 Online Courts and the Future of Justice

One can always rely on Professor Richard Susskind to offer the legal profession a bracing, perhaps uncomfortable message. Almost three years ago I reviewed his last book, The Future of the Professions (co-authored with Daniel Susskind), in which he laid out his theory that doctors, accountants, and, yes, lawyers, will not escape the rise of IT-enabled automation, which will take over areas previously thought to be the preserve of the human expert. As with all evolutionary processes, only those who can adapt will survive and thrive.

In this, his latest book, he turns his attention to a particular part of the legal process: the courtroom, and more generally the role of law in resolving civil disputes. “People do not really want you”, he advises the legally qualified reader, who depending on her disposition might nod her head in agreement, or anxiously check her pension statement. They don't actually want lawyers, they don't want courts, they certainly don't want arcane rules of procedure, and they don't even necessarily want judges: they want the outcomes you bring, specifically justice. And if that can be delivered in a cost-effective, proportionate, accessible, and comprehensible way through the greater use of technology, then we could and should do that.

Now, there's a lot to unpack there, not just for the lawyer worried about the future, and Susskind takes the task on with relish. Most importantly, I think, he grounds his arguments in principles and philosophy, and in particular in the essential – but not always well defined – concept of access to justice. What does that actually mean? And what, come to that, is justice anyway? Here I must declare the most modest of interests: Susskind, like me, took honours in jurisprudence at the University of Glasgow in the 1980s. (For the avoidance of doubt, we don’t know each other and have never met; he was a few years, and of course several magnitudes of intellectual brilliance, ahead of me.) I was touched to see that in his acknowledgments he lists his tutors, who were also mine; and no doubt they informed his intellectual development as surely as they influenced my own.

And what Susskind has written here, I would argue, is at least as much a work of jurisprudence as it is a primer on the use of laptops instead of courtrooms. Even putting aside inequality in developed countries such as our own, over half of the world's population does not, he contends, have access to justice in any meaningful sense, and IT gives us an opportunity to alleviate that. This book is not, therefore, a crude or utilitarian evaluation of how we might do things more cheaply (although there may well be cost-effectiveness benefits along the way), but about the unassailable moral case for access to justice and the rule of law being meaningful concepts for as many people as possible: about knowing what your rights are and how to protect them, and about being able to have those rights enforced, whether you are wealthy and privileged or not.

There's even an intriguing diversion into American Legal Realism at some point – as a former court practitioner myself, I'm not entirely unsympathetic to the proposition that the well lunched judge is the one you might, given the choice, want to appear before – where he notes that when clients want advice about a forthcoming court case, what they really want is a prediction of the outcome, which is something that computers might be able to produce at least as reliably as a human, if not now then certainly in the near future. And if they can do that, how far away is the possibiity of the computer, rather than the human judge, presiding as the ultimate arbiter?

Interestingly, for now Susskind is more reticent about the use of online courts in the criminal context, partly at least because he wonders whether public hearings in a physical courtroom play an important denunciatory role. He could have added digital exclusion to that: although he deals with that in the civil context, he will be aware of the argument that such exclusion disproportionately affects those most likely to be engaged with the criminal courts.

Susskind, of course, is a visionary and an optimist, and not all of his readers will be. Those who are familiar with the technology which is actually (not aspirationally) available on an everyday basis might debate whether it always offers a comparable, never mind superior, experience to the traditional everyone-under-one-ceiling courtroom. He accepts that the public sector has a variable track record in the implementation of large technology projects. And I do wonder what will happen when a member of the public, without legal assistance, accesses an online court process of the sort the author envisages, and then requires guidance over and above that which the process offers as an integral part of the system. It may be that a more inquisitorial system will develop, in which court staff and judges can offer the party ligitant guidance on how to proceed, nudge him towards greater clarity in his arguments, and even “explain when a point is being missed”. But I doubt I will be alone in having the odd misgiving about the extent to which a supposedly impartial judge can assist one side of a dispute in this way.

The author is refreshingly clear-sighted about these and other challenges. Calling Voltaire as his first witness, he warns us not to let the best be the enemy of the good: our objective should be “not to focus on [the] current shortcomings” of online courts, but instead “to consider whether their introduction would represent an improvement over our traditional court systems”. This, in my view, is a significant book, notably accessible and well written, and I would recommend it to anyone involved with, or interested in, the greater use of technology in the justice system. Were I less of a cynic, I might even call it inspiring.