The bar shows its mettle

The recent 21st Century Bar conference lived up to its predecessors in providing weighty briefings across a spectrum of practice areas, with much of relevance to in-house lawyers
13th January 2020 | Peter Nicholson

What links Rangers Football Club, the Star Back Cafe in Bangkok and some dishonest Spanish supermarket employees? All had their place in the latest annual 21st Century Bar conference, hosted by the Faculty of Advocates in early December.

As always, the format was a series of briefings from senior and junior members of Faculty – not to mention the bench – on selected practice areas, with a certain slant in the direction of in-house lawyers. Only a flavour can be given here of what was a pretty concentrated set of presentations, but we are pleased to reproduce separately on p 18 Lady Wolffe’s overview of the Commercial Court.

It was Lord Brodie, delivering the opening keynote address, who namechecked the Ibrox side – to whom, he assured us, the public had reason to be thankful! That derived from two of the court decisions spun off from the long saga of the administration of its former holding company: that of the five judge court in Whitehouse [2019] CSIH 52 which overturned the authority against the competency of suing the Lord Advocate for an allegedly malicious prosecution; and his own decision ([2019] CSOH 38) on whether legal advice privilege attached to internal Crown Office emails assessing the position of the Lord Advocate in relation to an application to recall a proceeds of crime restraint order.

As to the latter case, Lord Brodie had had to consider whether the Lord Advocate could be considered a client (on which he was satisfied that he could, since bodies such as HM Customs & Excise had previously been afforded protection) and whether the informal exchanges in question qualified as legal advice (which they did, since they related to what could prudently and sensibly be done). The critical point, for Lord Brodie, was the independence of the adviser, and it was recognised at least in the UK that this could apply equally to in-house lawyers. His key takeaway was to suggest that all lawyers remember that their duties require absolute independence, especially from personal interest or external pressure, even to please the client, the court or third parties.

The Bangkok cafe was the opening scene for Usman Tariq’s excursus into the possibility of suing a foreign business for infringement of a UK trade mark. Tariq had spotted it next to a Starbucks, and pondered whether it might be vulnerable to suit by the latter in this country. Drawing on cases such as Argos [2018] EWCA Civ 2211 (accessibility of website from abroad, but no infringement where no unfair advantage taken) and easyGroup v Easy Fly [2018] EWHC 3155 (Ch) (small company with no intention to trade in Europe, despite wide statements on website, so no infringement), he suggested that the territoriality of trade marks meant that online use of a similar mark would not infringe a UK mark holder’s rights unless there was targeting of UK consumers; that use on a website that might attract UK consumers might constitute use in the UK; and if goods could be delivered to the UK, infringement proceedings could be brought here.

Employment law was covered by Alice Stobart, who took us through the Tillman restrictive covenant decision (see our Employment briefing, August 2019, 29), before turning to the subject of covert recordings. Where recordings have been made by employees, the courts have had to weigh factors such as whether it was taken to entrap or gain a dishonest advantage, or just to prevent the employee from being misrepresented; what was actually recorded; and whether a breach of employer policy was involved (and employers, she said, should make it clear in their code of conduct that permission must be sought).

On the employer’s part, ECHR article 8 rights arise – but were held by the Grand Chamber of the Strasbourg court (Lopez Ribalda v Spain, 17 October 2019) not to have been infringed where, having been warned in advance that their employer intended to investigate takings discrepancies in this way, Spanish supermarket workers were caught thieving by a mix of visible and hidden cameras. In the eyes of the majority, the intrusion was proportionate.

An in-house angle emerged from Stobart’s coverage of the recent Shell case ([2019] EWCA Civ 1710), a disability claim where it was alleged that the claimant’s redundancy was a sham, on the basis of a leaked email and an overheard conversation in a pub discussing the attitude being taken by Shell’s in-house lawyer. Although the EAT held that neither communication attracted privilege (the email revealing “a strong prima facie case of iniquity”), the Court of Appeal overturned this on the basis that the email had to be seen as legal advice on how to conduct the redundancy, and the conversation was not an aid to interpreting it.

Another juicy topic, especially of the past year, is public law. Morag Ross QC naturally opened her presentation with the significance of the Cherry and Millar prorogation appeals ([2019] UKSC 41). The Supreme Court decision was watched by millions; but was it a legal landmark, or an orthodox application of established principles? Arguably both, Ross suggested; and while it shows that the court should not be put off from scrutiny because an argument is political, it could still be the earlier decision in Wightman [2018] CSIH 62 that has the greater significance for the development of judicial review. Lord Drummond Young’s statement regarding “everything turning on the rule of law” has yet to be fully explored, though she conceded that expectations that the Axa decision back in 2011 would lead to a bold new approach had not been borne out.

On the other side of the coin, she also noted the Lord President’s remark in Whitehouse that there was little substance in the view that a more sceptical view was required these days to the performance of public functions; and the failure of the petitioners in the Serco lock change case [2019] CSIH 54, and the level of protection from appeal that it represented, along with the ruling that Serco could not be regarded as a public body.

However, a recent procedural decision may result in more oral permission hearings, where these might previously have been refused.

A long-time regular at the conference, David Sellar QC, announced that this would be his final appearance. His specialist subject of company law this year covered, among other cases, two decisions on corporate personality, one of which, Lungowe v Verdanta Resources [2019] UKSC 20, shows how the concept can be elided by imposing a different form of legal liability, here a tortious duty of care, on the shareholder. This was in the context of a UK holding company of a Zambian subsidiary whose mine was alleged to have caused environmental liability, the court holding that there was a real issue to try as to whether the parent had publicly stated its responsibility for proper standards of control over its subsidiaries. However, in Rossendale BC v Hurstwood Properties [2019] EWCA Civ 364, the Court of Appeal had refused to void a scheme by which shell tenant companies had been set up and then wound up as a device to prevent their owner parent being liable for non-domestic rates.

Insolvency law was the remit of Elizabeth Roxburgh, who opened with the recent Carnbroe decision ([2019] UKSC 57), with its guidance on sales at an undervalue by an insolvent company, and on the appropriate remedy – the Supreme Court, in a new departure, ruling that if justice required, a remedy could be devised other than a straight order for reduction along with repayment of the price. She then touched on directors’ duties (reduction of share capital in order to create distributable reserves, when inadequate provision made for liabilities: BTI v Sequana [2016] EWHC 1686 (Ch)); relevant factors where a disqualified director seeks leave to act (Lee, Applicant [2019] SC EDIN 27); and the two important personal insolvency cases of Doneen [2018] UKSC 54 and Donnelly [2019] CSIH 56: see this month’s Insolvency briefing.

Roisin Higgins QC followed with a thought-provoking survey of recent data protection cases – a topic which, she reminded us, goes much wider than just GDPR, and concerns the most valuable asset some people have: “Much of what the human intellect produces is data.” It interfaces with human rights law and intellectual property law, among other things, and the Data Protection Act 2018 adopts wide definitions in seeking to ensure that data are processed lawfully. Organisations should carry out data protection impact assessments, though many don’t “and just hope to get away with it”.

Turning to the cases, she first highlighted the facial recognition technology decision, R (Bridges) v Chief Constable of South Wales [2019] HRLR 16, which accepted that the police had a wide power at common law although anyone else using such techniques would risk a breach of article 8 ECHR. She moved on to survey the issues raised by Morrisons Supermarkets, currently awaiting the Supreme Court’s decision on appeal, and Coogan v News Group, a 2012 phone hacking case where the court had to consider statutory exemptions from the privilege against incrimination in deciding whether to order an investigator to identify who had instructed him.

“There is now so much data, and so many ways of using it, that protection remains a real challenge,” she concluded. “It’s a big issue, but it’s only going to get bigger.”

Once again James Mure QC, who took the final slot, had drawn the short straw, in being scheduled to talk about the implications of Brexit for in-house lawyers, just days before the general election which would either affirm or potentially nullify it. He chose to reflect on the effect of the previously divided governing party and hung Parliament on the workings of Government, including the breakdown of collective responsibility.

There had been an impact on the courts, with judges being very aware of their exposed position and needing to display “moral courage” when faced with politically sensitive cases such as those led by Andy Wightman and Joanna Cherry. Lady Hale had said of the Supreme Court that “standing up for Parliament against the Government is an awful lot of what we do”.

Mure also commented on the prospects for trade negotiations, noting that we “won’t get something without giving something up”, and that there could be an effect from free trade agreements involving the EU that require a certain percentage of components to have an EU source.

And the implications for in-house lawyers? “It’s Friday – have a stiff drink!”, he concluded.

The coming year may see us in need of quite a few Fridays. 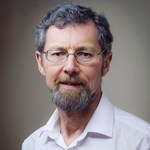