Stephen Blane is a solicitor advocate and partner at Urquharts in Edinburgh, an accredited specialist in professional negligence law and a member of the Society’s Pursuers’ Panel
13th January 2020 | Stephen Blane 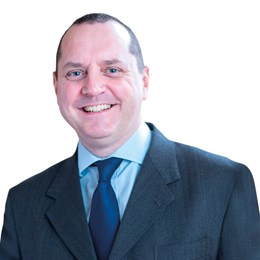 What made you pursue a legal career?

It’s hard to pinpoint exactly what made me choose law. When I was at school I was intending to study engineering at university, but when the time can to submit applications I decided that I wanted to hedge my bets; I knew a couple of people who had studied law and enjoyed it so I thought “I’ll give that a go”! That was 33 years ago…

Can you tell us about your career path to date?

I have been in litigation since the first day of my traineeship in 1991, with the exception of a stint of about four weeks or so, and in Edinburgh throughout that time apart from a short spell in the Borders when I was about three or four years qualified. I have been very fortunate in that I have worked with and for some excellent lawyers, one of whom in particular (I won’t name him but if he reads this I suspect he will know who I mean!) had a huge influence on me in terms of how to be a solicitor. Years later I still sometimes ask myself “Is this how he would do it?” when confronted with a problem.

I was encouraged to apply for extended rights of audience by two solicitor advocates that I was working with at the time, and I saw it as an opportunity to test myself as well as (hopefully) developing further skills and knowledge.

When I joined Urquharts in 2003 I was, as it turned out, brought in to take over from Alastair Thornton, who was a recent past President of the Society. Alastair was one of the original members of the Pursuers' Panel, so the opportunity was there to take over from him on the panel as well – I saw that as an interesting and rewarding field to develop. Solicitors make mistakes; everybody does. What is important is that clients have access to someone who is both willing to deal with those mistakes and seek redress for them as appropriate, and also has the skills and experience to do so.

It was not a difficult decision to apply for accreditation when my particular specialism was offered. It offers some level of reassurance to a client who may feel that they have already been let down by the profession, that this is someone they can trust to deal with the situation for them.

Have your perceptions of the Society changed since you joined the Pursuers’ panel?

More than anything I have gained a wider understanding of the range of different issues that the Society has to deal with.

What are the main issues that you think the Society has to address at the moment?

The question of the Society standing up for and promoting the profession as well as being a regulatory body is one which always stands out; the increasing level of regulation and compliance, money laundering being just one example; and the need to ensure that the profession remains relevant to society as a whole, and can meet society’s needs.

Two, probably. Keep a good work-life balance – working longer hours than a colleague doesn’t make you a better lawyer than they are. And don’t be in too much of a rush to specialise in too narrow a field.

What keeps you busy outside of work?

I have become a Middle Aged Man In Lycra over the last few years, so I like to get out on my road bike when I can – the effort of pedalling up some of Scotland’s hills keeps thoughts of the office out of my head for a few hours at least! I had set myself a challenge to complete my first century ride last year to mark my 50th birthday, so it was a real buzz to tick that off my list on a hot day in the New Forest.