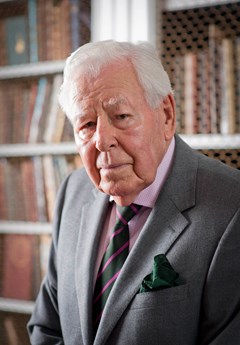 Peter Millar, who died on 16 March at the age of 93, was one of the best-known and most respected Scottish solicitors of his generation. He had a wide private client practice, for 27 years he was closely associated with the WS Society, and for eight of those years he was its head, as Deputy Keeper of the Signet. During his career he also held a number of other important positions in public life, and he organised one of the largest international conferences of lawyers ever held in Scotland.

Peter was born in Glasgow on 19 February 1927, the older of two children of the Reverend Peter (“Pat”) Millar OBE, Minister of Balshagray Church in Glasgow, and his wife Ailsa. In 1933 the family moved to Aberdeen on his father’s appointment as Minister of the West Kirk of St Nicholas. He was educated at Aberdeen Grammar School.

By the time he left school in 1944 the end of war was in sight, but he wanted to join the Royal Navy. In March 1945 he undertook officer training at HMS Raleigh in Devonport. By that time the commissioning of officers was greatly reduced, so he volunteered as an ordinary seaman and saw service on the eastern seaboard of the United States and in the Far East and Australia.

On being demobbed, Peter enrolled at the University of St Andrews, graduating with an MA in 1949. There he met his future wife, Kirsteen Carnegie. They married in September 1953, a happy union which lasted for more than 66 years until his death. They had four children: Anne, who predeceased him, Alison, Neil and Alastair. Kirsteen and these three survive him, along with three grandsons.

Peter considered studying theology and joining the Church, but he settled for the law, graduating LLB from the University of Edinburgh in 1952. He did however maintain close church connections for the rest of his life, and was an elder of St Giles Cathedral for many years. He served his apprenticeship with Davidson & Syme and qualified as a solicitor in 1954, being admitted as a WS that same year. Leaving Davidson & Syme he was offered, and took, a partnership in W & T P Manuel, which later became through amalgamation Aitken Kinnear & Co and then Aitken Nairn. He remained there throughout his career, until his retirement in 1992 as senior partner.

From 1964 to 1983 Peter served as Clerk of the WS Society. In 1983 he was appointed Deputy Keeper of the Signet, an appointment he held until 1991. He is the only person in the history of the Society, stretching back over 400 years, to have held both these offices. During his 27 years of service he directed, influenced or supervised the many important events and changes which marked that period of the Society’s history. He was also one of the leading figures in the founding of the Edinburgh Solicitors’ Property Centre in 1971, jointly underwritten by the WS and SSC Societies.

One of the most challenging and fulfilling experiences of Peter’s career was when he was asked by the Law Society of Scotland to organise the Fifth Commonwealth Law Conference, held in Edinburgh in 1977 and attended by some 2,000 delegates. It was to have been held in Uganda but had been postponed because of Idi Amin’s dictatorship there. It was an outstanding success in Edinburgh, as a result of which he was awarded the OBE in 1978. After this he was invited to other Commonwealth Law Conferences, representing Scotland at those held in Hong Kong, Jamaica, Cyprus, Vancouver and Melbourne.

In 1991 he was appointed as a chairman of tribunals, first of Medical Appeals (the first Scottish solicitor to be so appointed) and later of Pension & Disability Appeals. He continued these tribunal commitments until 1999.

Peter’s recreational interests included golf, hill walking and travel. His enthusiasm for golf went back at least to his time as a student in St Andrews, and he was a long-term member of the Bruntsfield Links Golfing Society, of which he was honorary secretary for six years from 1983, and of Muirfield (the Honourable Company of Edinburgh Golfers). In autobiographical notes he has left behind, he listed his career and leisure interests and added: “Apart from the above I have never been asked to do anything”. He was a master of understatement.