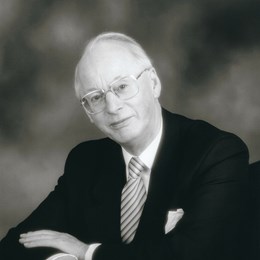 James Haldane Tait died peacefully at home on 9 April 2020, from causes unrelated to coronavirus. He was a remarkable man who has left the world immensely enriched by his time upon it, and is remembered with love and affection by all those whose lives he touched, whether in law, in the church, in scouting, in horticulture, in the apparently esoteric world of Egyptology, or in any of the other areas of human endeavour in which he took a keen interest.

Born in Leith on 8 January 1931, Haldane attended school at George Heriot’s where his love of language and skill in debating was manifest.

It was during National Service from 1952 to 1954 that he became involved with West Hartlepool Scouts, leading on his return to Edinburgh to his becoming group leader of the 7th Leith Scouts, and eventually receiving the prestigious Award of the Silver Wolf. Even now there are those who have not forgotten when he turned a training ship in Leith Docks into a pirate vessel, with himself as the pirate captain and the boys as his crew, knotting ropes, walking the plank and eating (they were convinced) weevily biscuits!

On graduating BL from Edinburgh University in 1952, he served his apprenticeship with Shepherd & Wedderburn and Gray Millar & Carmichael SSC, before joining the family firm of G W Tait & Sons SSC. On the death of the senior partners, his uncles, he carried on the family business in a new partnership with George Tait and David Johnston until 1985, when he moved to Kilgour McNeill & Sime, and then Robson MacLean. He became a temporary sheriff and served from 1987 to 1991 as Joint Auditor of Edinburgh Sheriff Court. He was an enthusiastic Council member of the SSC Society from 1967, and its librarian from 1985 to 1990. He was also a Council member of the Law Society of Scotland and convener of the Legal Aid Central Committee, and is remembered as a hardworking editor of the Society’s Journal.

In 1991, he left private practice to take on the challenging role of Auditor of the Court of Session, earning the respect of his colleagues for his fairness and courtesy.

In his private life, he was a much-loved husband and father. His marriage to Margaret McLeod in 1968 brought him great happiness and joy, lasting until his death. In Margaret, he found a life partner with whom to develop numerous interests, contribute to the community and serve others. Together they formed a great team, sharing a sharp intellect, a pawky sense of humour and, at root, a deep understanding of human nature. They were made for each other. They had two children, Margaret Anne, and Colin, who sadly died in 2000 after a kidney operation, and three grandchildren.

Following retiral as Auditor in 1998, Haldane was able to devote more time to his private passions, including horticulture and ancient history. After studying archaeology at Edinburgh University came the joys of deciphering hieroglyphs and studying ancient stelae at Glasgow University, memorable visits with Margaret to Egypt and Turin, and lectures at the Egypt Exploration Society in London. His love of Egyptology became an absorbing passion and one which gave him enormous pleasure.

I first met Haldane in 1975, when I was devilling to Alastair McGregor. I remember him coming to Parliament House, immaculate in his blacks and wearing a bowler hat, but the very last thing he was, was stuffy. Rather, he was bright, lively, sharp, entertaining, above all filled with kindness. He always acted with integrity. He was true to his essential nature, and, in that, served as an example to us all.

One of his former colleagues said of him that he was “friendly, amusing, widely respected with a wonderful sense of humour, entertaining, great company and a good friend. He showed kindness and exceptional concern for the wellbeing of others. Working with Haldane you learned so much”.

He was also a man of quiet, undemonstrative, but deeply held faith, and an elder of Palmerston Place Church. Perhaps, if you were to sum up all of Haldane’s qualities in a single phrase, you could not better what Douglas Irvine, one of his apprentices at G W Tait & Sons and now a minister in the Church of Scotland, has said of him: “J Haldane Tait was a true Christian gentleman.”

Haldane achieved much in so many areas of human endeavour, influenced so many people and has left a legacy of lives made better by his touching them, whether it be the young wolf cubs from the tenements of Leith whose eyes he opened to the natural world, or the young lawyers who were inspired to follow his example of integrity and service. In those whom he influenced, you see, now, his enduring legacy.