Part of the Community Enterprise Village at Kilmarnock Railway Station, the family and criminal practice of Tony Bone Legal is an element of a possible model for intervention services elsewhere
16th November 2020 | Peter Nicholson

Platform 1, Kilmarnock Railway Station is not the typical business address of a Scottish solicitor practice. Nor would most firms be part of a community enterprise trust, sitting alongside and working with counselling, addiction and rehabilitation services. Or have as their main players an ex-CID officer and a former social worker.

Tony Bone Legal, on the other hand, is not your typical legal practice. But since setting up at the station a year ago, it has furthered its founder’s aim of providing an intervention for clients rather earlier than most legal advisers achieve, in a way that others, funding bodies included, might look at copying more widely.

Despite qualifying only in 2016, Tony Bone himself has a long connection with the law. After leaving school at 16, he sat Highers at college and joined the police, progressing to chief inspector in the CID before transferring to the National Training College at Tulliallan and then Glasgow’s Violence Reduction Unit (VRU). Discovering early on an aptitude for the law, he eventually took a part time LLB, and by the time he retired from the police aged 49, he knew he wanted to qualify.

Having a home background of a violent father, which he left as soon as he could, Bone’s various police experiences convinced him that the VRU’s preventative approach was the better one – but a Glasgow criminal traineeship, while great experience, was “like the lawyer version of the CID, where you were churning cases and clients in the door then back out once they signed their legal aid papers”. After gaining further experience in civil work including domestic violence, he resolved to set up his own practice, and discovered the Community Enterprise Village in Kilmarnock, where his combination of criminal and family law is a natural fit.

I wonder whether his police career has been any disadvantage in finding business.

“It’s funny you say that, because I had the same thoughts when I started as a trainee. Now I know the reaction is quite positive. If you’re a criminal client, you see that as an advantage because of my insight, and equally clients in family law see it as a bonus because of my previous work especially in domestic violence and CID. Clients in general really like that investigative ability.”

The Village is primarily funded by the Kilmarnock Station Railway Heritage Trust, a condition of funding being a focus on young people and reducing and preventing reoffending. “It’s the first of its kind ever in the UK, but it’s giving a template to do this elsewhere,” Bone tells me.

His neighbours include a GP, a behavioural therapist, addiction recovery, a delicatessen offering training and experience to people trying to get into 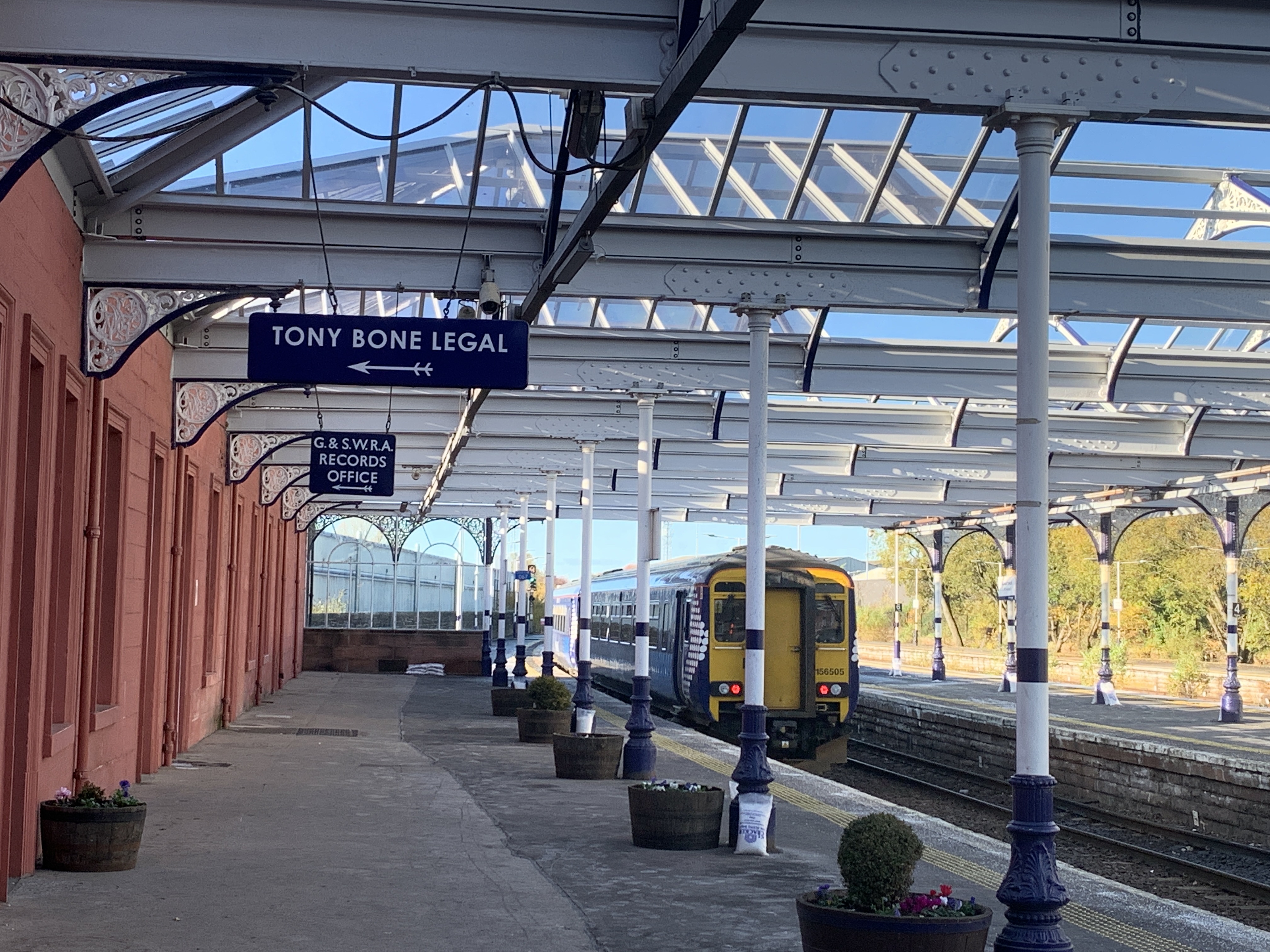 mainstream working, and an active travel hub with a focus on health and wellbeing. “It seemed to me quite logical that what was missing was legal representation, because many people who are in the system suffer because of the system, and I have these services at my doorstep.”

What does he mean by “suffer because of the system”? It applies, he says, both to those familiar with the court system and those who are not. The latter “find going to court, whether it’s a child welfare hearing or a criminal procedural matter, extremely stressful. And that has an effect on their mental health. Then I have clients who are never out of the system; there doesn’t seem to be an attempt or an intervention to take them out, especially young people”.

He instances a young female client who “went off the rails” at age 16, when childhood traumatic experiences mixed unfortunately with adolescence. “Because she was arrested and brought to court she was immediately treated as a criminal, and it took about a year before anyone recognised that what they were actually dealing with was a patient and not a criminal. Very fortunately we had a sheriff who had a background in children’s hearings and recognised that.

“In actual fact she needed specific specialist help, which she is now getting. That’s really where I’m coming from: it’s to try and deliver more of a holistic service with legal advice as the primary focus, while also considering what else can be done to help the individual, and their family in many cases.”

In this he is assisted by his colleague James McKay, currently his trainee but with a previous career in social work that parallels Bone’s in the police. “He decided to study the law because he wanted to do things differently, and recognised there was a gap in terms of representing children and children’s rights. It seems to be that the system talks to children rather than listens to children.”

McKay quickly became invaluable to Bone. “It soon got to the stage where I couldn’t do without him, because he was helping to enhance the business model not just with his experience but with his views on how we should be delivering our services. My background in domestic violence, along with his background in children and family, parental capacity assessments, has just been an excellent partnership that we’ve developed.”

Especially since lockdown, most of the firm’s work is family rather than crime centred, albeit with domestic abuse increasingly featuring over that time. Bone believes it important that professionals – doctors, dentists and teachers as well as lawyers – are trained to recognise the signs of domestic violence and of trauma.

“We as solicitors have a responsibility to do the same, especially when the victims are our clients. That may be difficult for a criminal practice, but certainly from my perspective as a criminal and family lawyer, it’s my responsibility if I think I recognise the signs of domestic violence, whether physical or psychological or financial, to make the appropriate referrals to ensure my clients get the best service possible.”

Where children are involved, with or without a domestic abuse element, Bone believes the system could focus better on their needs. Contact and mediation centres, he explains, tend to be quite clinical and to use rather untrained staff: with better resources, sessions could be a much more constructive and positive experience for everyone involved.

If, for example, a young child has not seen their father for a long time, “having to take them to a strange environment makes it even more stressful for the child, and of course young children pick up on stress and anxiety from their parents as well”. Particularly with centres having had to close, he promotes an open air alternative, like a park or play area, “because it doesn’t cost anything, and children love being out in the open air, no matter the weather”.

He continues: “I have now used that quite successfully on several occasions in child welfare hearings, which then opened up contact between both parents. On some occasions contact had to be observed by a child welfare reporter or bar reporter. It just meant that rather than clogging up the system we were able to get things moving with alternative venues.

“Of course the whole idea is to avoid any traumatic experiences for young children. One of my good friends, Iain Smith, is a leading advocate of recognising childhood trauma and its effects in adulthood. That’s a focus for us, for all solicitors, that we need to do as much as we can to avoid that situation.”

Glasgow has a specialist domestic violence court, but there is nothing more local to Kilmarnock. Would it help? “Definitely,” Bone replies. “There are plans for a domestic abuse court, but they are on hold because of the COVID restrictions. I would go further: I would like to see a mental health court as well, because that would enable more focused and specialist support services to deal with clients who are just involved in a vicious cycle of repeat offending. I think that’s the way forward.

“In my previous life in the VRU, we were pushing for a specialist weapons court, and the only sheriff who liked the idea was Sheriff David Mackie up in Alloa, who was a tremendous advocate of preventative work and could see the need for that type of approach. Yes, specialist courts in general are the way to go.”

How far does he think we can take that approach?

“We need to start off with what we know already, and there are already examples in the States of where mental health courts have been quite productive. We also have the drug testing courts, and probably an even bigger issue is alcohol. The vast majority of criminal cases that I deal with involve alcohol. There are 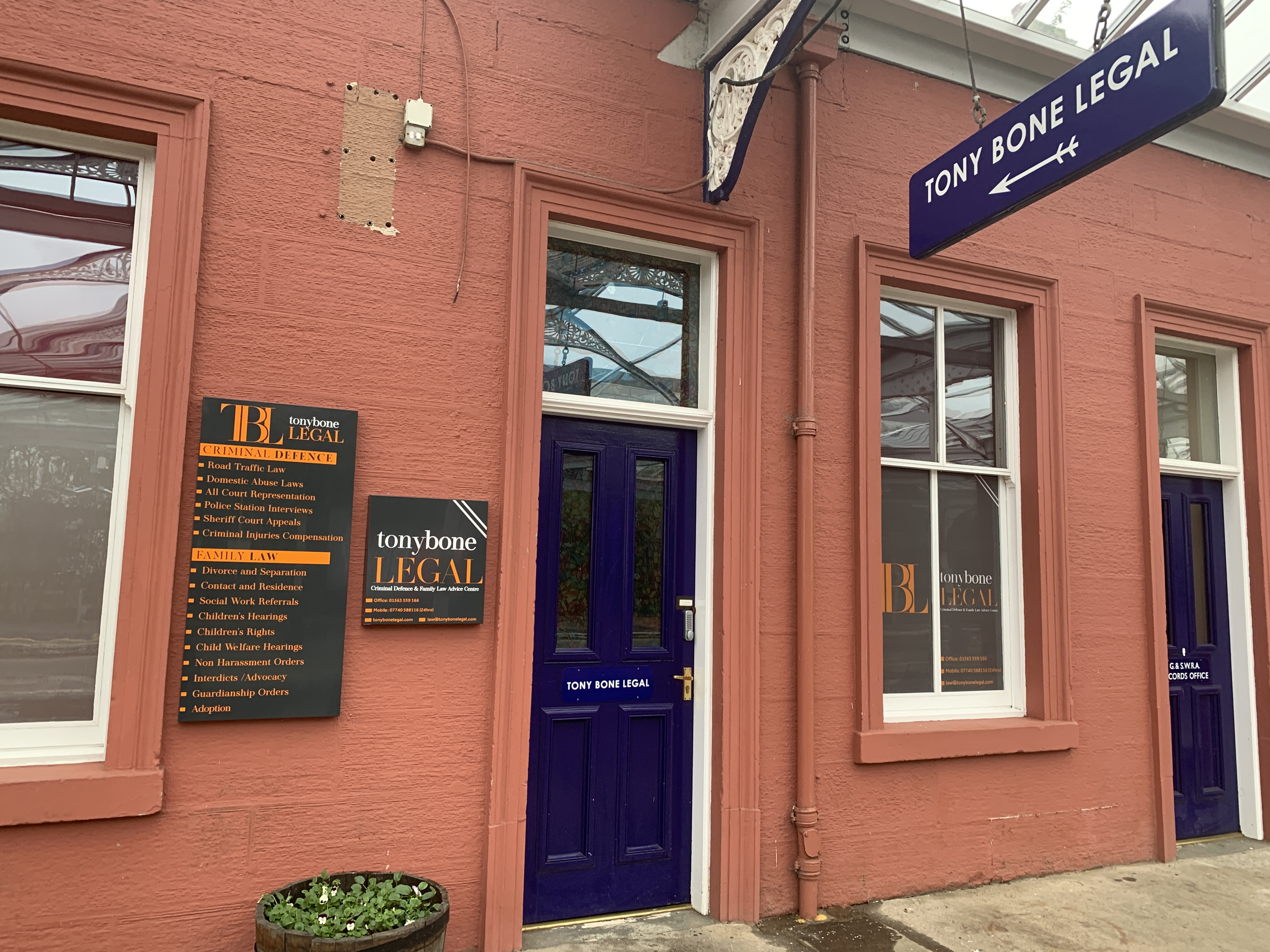 opportunities to be much more innovative in the use of remote monitoring of clients who find themselves involved in alcohol fuelled cases. We have the legislation in place where we can tag clients to monitor their alcohol levels, and rather than incarcerating them in a prison unnecessarily, they could be monitored out in the community. It seems to me that is a more intelligent way of managing reoffending than just sending people to prison, which is counterproductive.”