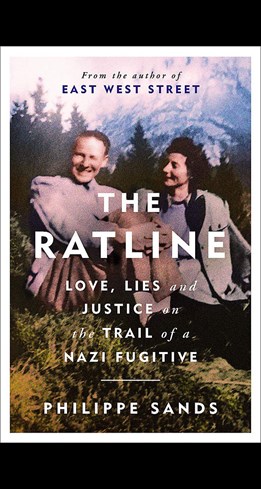 In East West Street, Philippe Sands revealed the suffering of his own family and the Jewish community in Lviv after the Nazi takeover of Ukraine, identifying the crimes and roles of the main protagonists. He built a fascinating narrative around the guilt of these individuals, their trials in Nuremburg, and how the international crimes of genocide and crimes against humanity were adopted. One man who escaped capture and the trials was the Governor of Galicia, who was responsible for the extermination of Sands' family. He was Otto von Wächter.

The Ratline traces von Wächter's personal story from early captivation with national socialism, his mixed relationship with his adoring wife Charlotte, with whom he enjoyed an important family life, and through his military activities as he progressed to become Governor of Galicia (which included Lviv). He was given responsibility for setting up the means of annihilating unspeakable numbers of (mainly) Jewish people as part of the Final Solution. At the end of the war, he evaded capture as a war criminal, spending three years isolated high in the Austrian Alps, maintaining occasional contact with his wife, but eventually determining to leave for South America, the destination of many Nazi criminals. This required travelling to Rome using a network of contacts, eventually meeting the sinister figure of the Vatican Bishop Alois Hudal who, he hoped, would support his escape to Argentina. His time in Rome was difficult, with few resources, even resorting to film acting to earn some money. Just as he thought progress was being made, he suddenly became ill and died in July 1949.

Using multiple sources of evidence, we are escorted through events in a logical sequence with engaging speculation. A major evidential source and personal interest is von Wächter's son Horst. Living a lonely life in a ramshackle castle in Austria, he believes his father to be innocent of the grave crimes with which he is charged, mainly because he can only see him as a benevolent father figure. Sands and he meet on numerous occasions, and we feel a warmth between them, although persuading him to accept his father’s guilt seems a forlorn quest.

This is an outstanding work of interest on many levels, from historical detail to morality and humanity; and one is left with many reflections, one of which still haunts me: the rapidity with which the Allies dropped the quest to apprehend war criminals, switching to engaging them as spies operating against communism.

This is undoubtedly one of the most cerebral crime novels ever. The clues are to be found in the title and in the fact that the central character is a serial killer nicknamed Wittgenstein. For my own part I found the lengthy philosophical discourses and exchanges interesting, but be warned that they may not be to everyone's taste.

First published in 1992 and now reissued, the book is set in London in 2013, and a pretty grim place it is. Many places have been destroyed by the IRA; the docklands development has long gone bankrupt and is a gang ridden slum; and the once proud Guys Hospital is now a glorified A & E, Edinburgh being the only place in Britain which now offers any form of medical education. It has hardly rained in five years – standpipes are the only source of water for the masses. Smog permeates everywhere and the pound has been replaced by the dollar. The mandatory sentence for murder has been replaced by an irreversible coma.

In this brave new world, tests have been done to identify men whose brains lack a ventro medial nucleus. As you all know, this acts as an inhibitor to the sexually dimorphic nucleus, the repository of the male aggressive response. (I had assumed that this too was a bit of fiction, but it does seem to be loosely based on actual science.) A register, known as the LOMBROSO program, has been set up to monitor these individuals. The problems begin when a steady stream of these men start turning up dead, killed using the same MO. Our hero Jake, aka Chief Inspector Jakowicz, turns her attention from the other serial killers she has on her plate.

It's always interesting to look back at predictions which have been made for a future year we have now lived through. The state of the art technology is the pictophone, and you can talk to an intelligent building to access most forms of assistance. A reality approximation suit can fulfil most of your earthly desires. Yet a row of dinner plates in a rack reminds a character of computer disks.

Like me, you may be wondering why this novel has been reissued in 2020. Philip Kerr is not a name known to me; however, after a degree in law and philosophy (that explains it) he produced over 30 novels, including 13 featuring Berlin based private detective Bernie Gunther. Kerr died in 2018. I guess that's why the back catalogue is seeing the light of day again.

A Study in Crimson: Sherlock Holmes 1942

Sorry to say, I have not read a Sherlock Holmes novel written by Conan Doyle. However, this is a riveting read. As the author points out, the film studios developed their own story lines for Holmes and saw him pitted against Nazis and the like, with the inimitable Basil Rathbone in the lead role. So Harris picks up from there and brings us an atmospheric novel set in bomb damaged London in 1942.

The murders of several women occur where the killer writes their name in blood on the walls at the scene and leaves the bodies horribly mutilated. There are distinct echoes and similarities to the murders by the undiscovered Jack the Ripper. A cast of characters including Dr Watson, Lestrade and an American reporter investigate the crimes, but Holmes is always a step ahead. Is there a connection between the descendants of the suspected Ripper and these new murders, or is something more intriguing afoot? Written in an engrossing and engaging manner, this book is a unique development of the Holmes novel and worthy of your time.

The Book of Trespass: Crossing the Lines that Divide Us

The Book of Trespass is as much about the social, economic, political and physical boundaries that have been constructed over time as it is about actually transgressing them. Hayes delves into the history, power and wealth that helped create such boundaries, and by doing so he helps to shine a light on why these boundaries exist and who they help to serve or hinder. The book and Hayes' experiences are primarily focused on England, which has a different legislative arrangement when it comes to rights of access when compared with Scotland.

Contrary to what the title might suggest, this book is not a reference text on the law of trespass. While it does mention some of the legislation, both historic and modern, surrounding trespass it is not intended to be a textbook. Rather, as a serial trespasser, Hayes takes us on a journey through the ages from the first acts of enclosure to modern times, peppered with his own first-hand accounts of “the dark art of trespass” including brushes with those who safeguard the boundaries. His accounts will resonate with many who have ventured from the path and been met with the question “Are you lost?”, which is so often loaded with a sense of incredulity. Through his own experiences Hayes delves into the power, wealth and property rights that lie behind such questions and the many “Keep out”, “Private property” and “No right of way” signs that mean that so much of the countryside and its resources are limited to so few. While many might not think too much further about these restrictions, perhaps beyond a brief spell of annoyance or frustration, Hayes sees a great injustice and has clearly spent a lot of time getting to the bottom of how such things came to be.

The book appears very well researched and current. It includes a number of statistics as well as stories of migrants, travellers, ramblers and protestors throughout time. It touches on topics of racism and the divisions that have been driven between people of differing race and ethnicity to create yet more boundaries as a way of exerting control and power – examples of which are still very prevalent today. Hayes makes similar points about the class system. These boundaries are social constructs rather than physical ones, but serve the same purpose as physical walls and fences. Hayes argues that they are intended to keep things in their place and preserve an imbalance of wealth and power.

Hayes' writing is evocative and inspiring, with good humour. His artwork is also on display within the pages, and his connection and promotion of the natural world is clear through both his writing and his art. The reader is left in no doubt that Hayes is an activist, seeking greater freedom to explore and engage with the vast areas of land that are off limits to most. The antagonists over time include the church, the crown, the state, media moguls and politicians or anyone else who may try to use their power, wealth and influence to curb the freedoms and rights of the common person.

Reading as a person who has lived in Scotland for all my life, it certainly helped me to appreciate how fortunate we are to have the freedoms and rights of responsible access that we do in Scotland, but also reminds me of the fragility of these rights and the need to ensure that they are exercised responsibly to avoid them being curtailed or removed.

The Book of Trespass is well worth reading for anyone, both legal professional and lay person, with an interest in access rights, looking to learn more about the history of trespass and who may question the long established principle that right of ownership should give the right to exclude all others.