Lawyers and climate change – leaders or followers? I will answer that question towards the end of my remarks. But at least the verdict won’t be as bad as when the IBA came to Dublin in 2012 and asked me to be one of their guest speakers. I recall saying that the IBA, and lawyers generally, were completely behind the curve on climate change and needed to step up.

To my surprise, the IBA responded wonderfully, particularly the International Human Rights Institute under Dr Helena Kennedy, and produced an important report called Achieving Justice and Human Rights in the Era of Climate Disruption. I have kept in touch with the IBA and I have seen great progress. The IBA formed the Climate Change Justice and Human Rights Task Force, and more recently published a model statute, which is aimed at helping citizens to launch legal challenges against governments for failing to take action over changes. And we have seen a huge increase in litigation in recent years.

But I don’t think lawyers have generally spoken enough about the justice dimensions of climate change, and that’s something I feel very passionate about. There are at least five layers of injustice we need to be aware of.

First of all, climate change affects the poorest countries and communities, and the small island states, and indigenous communities, disproportionately and much earlier. Yet they are the least responsible. It amounts to a racial injustice as well.

Secondly, within that is the gender injustice of the different social roles, often even lack of rights, of women. Yet they have to put food on the table; they have to make their communities resilient. And they do.

Third is the intergenerational injustice. Young climate activists have been calling us out on that, and they are absolutely right.

The fourth is a subtle but very important one: the injustice of the different pathways to development of different regions. Industrialised countries that built their economies on fossil fuels, now have to wean themselves off as rapidly as possible, but with just transition for the workers involved, to ensure that green jobs are focused very particularly in those communities. It will need resources, a Just Transition Fund as some have already set up.

The fifth is the injustice to nature herself: the loss of biodiversity, the extinction of species. UN reports since 2019 have revealed just how serious that is, and that we’re on track for a 2.7˚C rather than a 1.5˚C world temperature rise, which would be disastrous.

There’s a madness in all of this, and lawyers should wake up.

So what’s my verdict on all of this, and where lawyers are? Are they really leaders? I’m impressed at what the Law Society in Scotland has done to be accountable for its emissions, and reduce its emissions. That’s certainly leadership. But I have to say, lawyers are not leaders – yet. Because far too many lawyers still don’t have the mindset that we are in a crisis, a climate crisis. It’s important that we all have that mindset, and it’s particularly important that lawyers do, because you can be very effective in so many ways: not just in litigation, but in policymaking, in advising, and so on.

What do we all need to do? I always urge that each one of us – judges, lawyers, whoever – need to take three steps.

First of all, we need to make the climate crisis personal. That is, you’ve got to do something today that you weren’t doing yesterday. You’ve got to recycle more carefully; you’ve got to change your diet maybe, or change the way you travel. But own the crisis. You’ll feel better if you own it.

Secondly, get angry with those who aren’t doing enough – governments, cities, business, investment, and all of those who should be taking more responsibility.

Thirdly, and this is the most important, we have to imagine this world that we need to be hurrying towards. It is going to be a very healthy world, because we won’t have air pollution, fossil fuel pollution, indoor and outdoor, that kills between 8 and 9 million people a year. We’ll go back to the early COVID days of very good light, and hearing the birds. We won’t just have cities that have gardens, and trees, but also farms, vertical farms. We’ll have farming that will be regenerative. We’ll have countrysides that will be regenerated in an exciting way. All of this is a future that we have to keep talking about if we are serious about getting there in a hurry.

I’m very much a chair of the elders now, somebody who wants to bring hope in any talk that I give. So I want to end with the words of Nelson Mandela, words that are very appropriate to the COP in Glasgow: “It always seems impossible, until it is done.” 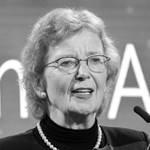 Mary Robinson is Adjunct Professor of Climate Justice at Trinity College Dublin, former UN High Commissioner for Human Rights, and a former President of the Republic of Ireland