The Enigma of Clarence Thomas 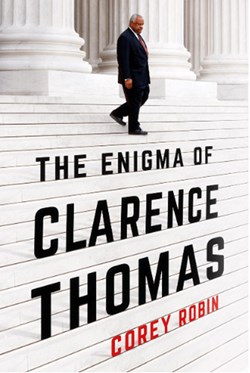 When Clarence Thomas was sworn in as a member of the US Supreme Court in 1991, he had only 19 months’ judicial experience. He had practised law for only five years before taking on a series of political and bureaucratic appointments in Washington DC, and had not produced a significant body of legal scholarship.

So how should we describe him? For Corey Robin, Thomas is “a profoundly political man who has chosen to express himself and his politics through a medium [court judgments] that puts severe constraints on how that politics and self may be expressed”.

Robin himself is a political theorist rather than a lawyer and, as such, he has no reservations about treating court judgments as stylised political statements. This is a position likely to make many lawyers uncomfortable but, given the reality of US judicial appointments, is surely closer to the truth than many would like to admit.

Thomas’s politics are the subject of this book. For Robin, these politics are worthy of study because Thomas is one of the most powerful African-Americans in history and because they are extraordinary in their own right: Robin’s contention is that Thomas is a “black nationalist”. For Thomas, race is, and always has been, the foundational schism in America, a nation where nearly every institution, social practice and political initiative is working at the expense of black men and women.

He attacks affirmative action in a dissenting judgment, Grutter v Bollinger, not because it discriminates against white students but, by providing a mere figleaf of inclusion while ignoring wider structural issues, reinforces white supremacy. In McDonald v Chicago the Second Amendment is to be understood as guaranteeing the right of individuals, not militias, to bear arms, because it was the forcible disarming of African-American families at the end of the Civil War by the Southern states that led to wholesale massacre and the introduction of Jim Crow. Thomas inveighs against compulsory purchase of property for economic development projects in Kelo v City of New London, because in practice “urban renewal” means the forcible removal of African-Americans from their traditional neighbourhoods, a liberal form of ethnic cleansing.

Robin’s position is less convincing when applied to Thomas’s jurisprudence on campaign finance, as it relies more on inferences from Thomas’s childhood and non-judicial remarks – shakier ground than court judgments. Furthermore, Thomas’s views on police activity surely owe more to conservativism than black nationalism – though the two are undoubtedly intertwined. (Robin’s insightful book on right-wing thought, The Reactionary Mind, is a useful companion to The Enigma of Clarence Thomas.)

That notwithstanding, this is an original and unsettling book. Robin’s central thesis is well argued, meticulously researched and clear-eyed in its conclusions. There is considerably more depth than can be examined in this review.

Clarence Thomas is a remarkable figure, an intransigent extremist hiding in plain sight with an unrelentingly bleak view of America.

James Callander, Diploma student at the University of Strathclyde