The thing about the pandemic and lockdown is that it has created lots of new words like “covidiot”: a person “who ignores the warnings regarding public health and safety”, or “who hoards goods, denying them from their neighbours”. There are others like “Blursday”, which connotes that sense of loss of reality when the routine of work wanes and one day seems much like another, particularly if you are furloughed.

As we move into transition, new words are being invented to cope with these “unprecedented” times. (I know some people scream at the overuse of this exceptional word.)

Can I offer, as things reopen, the “covidexcuse”? At the local supermarket when buying a few essentials like a copy of the Racing Post (no more doomscrolling for me), and some square sausage to bolster me for my 10,000 steps and 10 staircases a day, I proffer my debit card as it is the preferred option, but when I ask for £20 cashback I am told this service is no longer on offer “due to COVID”. At the big supermarket, the recycling centre has been closed, but at least you get a trolley free – due to COVID. My older daughter, who lives in Sussex, noticed a takeaway with the legend outside: “Cash payments only due to COVID.” Aye right!

But what of the future? How does business restart? Time to look back to blue sky thinking, what was once politically, socially and organisationally difficult but might now float in the perfect storm. A few years ago there were some controversial court closures, but now like other organisations, too many branch offices and cost centres are so “pre-Corona” (I don’t think they can sell that beer any more). Some agents have not been in court since mid-March – it’s all virtual.

Is it time to dust down the proposition paper A New Model for Summary Criminal Court Procedure from February 2017?

Intermediate diets were seen by many as
a waste of time, but I always felt they could work if both sides were properly prepared with full disclosure, issues were focused, reasonable pleas offered or the length of trials envisaged better estimated. The aspirational model suggested that only custody accused appeared at court in the first instance, and thereafter the only court appearance should be to tender a guilty plea or for a trial to take place. I doubted the practicalities of that vision, but it may come to pass. I did think, since the public had been weaned on the Diary Room in Big Brother, could we not have court outstations where punters and their solicitors could have cases called and dealt with without having to travel into the Big City?

Jury changes have been discussed over the years, but the reduction in jurors from 15 to perhaps 12 was shelved and the abolition of “not proven” seems to have stalled. An early coronavirus push to abolish juries was seen as a step too far too soon, and the wartime jury of seven, requiring five for guilty, may not be on the policymakers’ agenda either. Models for a three courtroom jury trial are unsustainable long term, just as limiting pub or restaurant customer numbers to comply with physical distancing are ultimately uneconomic. We shall see...

Meantime, I recently saw my grandchildren, my older daughter’s brood of five, for the first time in five months. The oldest, now 10, seemed to have developed a keen sense of fairness and was critical of some of the school rules. I bought her a copy of the Ladybird guide to Baroness Hale, alias Equal to Everything – Judge Brenda and the Supreme Court. It was written to inspire more women to enter the profession, but it produced results much quicker than anticipated.

Last month, during lockdown, purple paint was found splashed on the bathroom door. Suspicion fell on Leila, aged four and a half, who had been spotted in the vicinity and was found to have a purple stain on her arm. She was put on trial by her peers. Isla, 10, was the judge complete with makeshift wig and a gavel that all the lieges are disappointed to find are not used by UK judges. Merryn, seven, was a fearsome looking court police officer, and Jago, eight, and Astrid, two and a half, the jury. A verdict of guilty was swiftly returned and a community sentence imposed. May I offer this as a social bubble model? The dignity of the court was maintained, give or take a bit of thumb-sucking by some of the participants.

COVID or no, there are still a few appeal cases to keep this column going for now, but there may be a gap in 2021 before trials pick up again.

Ahead of the end of the consultation period on 21 August of the Scottish Sentencing Council guideline on young people, Lady Dorrian delivered the opinion of the court in the appeal against sentence Hay v HM Advocate [2020] HCJAC 30 (8 July 2020). The appellant was
20 at the time, and at time of sentencing, having pled guilty to a charge of murder involving breaking into a house and repeatedly stabbing the occupant, after being involved in a five-day alcohol and drugs binge.

The guilty plea came at a continued preliminary hearing about six months after the incident, following a continuation for defence enquiries into the appellant’s psychiatric condition. The sentencing judge fixed the punishment part of the life sentence at 19 years, reduced from 20 years for the plea.

The Appeal Court recognised this was a serious, unprovoked and distressing offence, aggravated by having been committed in the victim’s own home in the presence of members of his family. However, bearing in mind the appellant’s youth, lack of maturity and underdeveloped sense of responsibility, it set the headline figure at 18 years and gave a discount of two years, resulting in a punishment part of 16 years. The court stressed the considerable utilitarian value in a plea of guilty to a charge of murder.

Sufficiency of evidence was in question in Douglas v HM Advocate [2020] HCJAC 23 (10 June 2020). The appellant and his co-accused were convicted of two similar offences committed near to each other in Aberdeenshire on the same day, involving forcing their way into homes, demanding money and drugs, assaulting the occupants with knives to severe injury and permanent disfigurement and robbing them of mobile phones and other property. The second charge also involved the use of an axe and libelled attempted murder.

There seemed to be ample evidence for the first charge, which involved both accused and occurred about 9am, but in the second incident, which took place at 9pm, the complainer was unable to identify any of the three assailants. He did hear a fourth male speaking about them all getting out of there and shortly afterwards the men left and a car was heard accelerating away.

A neighbour was able to corroborate men entering the house and one of them demanding drugs. She saw a car driven off shortly afterwards and gave a vague description. CCTV evidence linked the appellant to a green car seen nearby. The second complainer’s blood was found on a rear interior door release. There was forensic evidence linking co-accused with the recovery of stolen property.

The appellant’s position was that he “was there” but did not do it. The Crown case on the second charge was circumstantial and based on an allegation of antecedent conduct. It was accepted the appellant was either one of the three active participants or the fourth person.

Giving the opinion of the court in one of his last judgments before retiring, Lord Brodie considered the appellant was not simply a bystander but was part of a group who acted together in pursuance of a common criminal purpose, namely to rob the complainer of drugs and other property using violence. They had arrived in a car at the complainer’s house, immediately got out and ran into the house wearing dark clothes with balaclavas, some carrying weapons, and there was the shout “give me the drugs”. The inference that the appellant was party to an agreement to attack and rob the complainer was well nigh irresistible.

The evidence of the appellant’s involvement in a similar incident earlier in the day was not necessary for sufficiency in the other charge, but strengthened the inferences which could be drawn. The appeal was refused.

Domestic abuse remains high on the agenda in the sheriff court. Finlay v HM Advocate [2020] HCJAC 29 (25 June 2020) is another example of the complexities which can arise when an exceptional latitude features in the charge. It involved allegations of threatening or abusive behaviour contrary to s 38(1) of the Criminal Justice and Licensing (Scotland) Act 2010 by the appellant towards his partner, later wife, from February 2014 until the end of December 2017. The couple met at the start of this period, moved in together in June 2014 and married in 2016. A daughter was born in October 2017.

The complainer spoke to various incidents of threatening and controlling behaviour. Her sister spoke to the majority of these, and further corroboration came from text messages where the appellant apologised for his behaviour and promised it would not continue. A friend corroborated the complainer’s account of an incident towards the end of December 2017.
A submission of no case to answer was repelled by the sheriff.

In his charge, the sheriff commented that because the incidents had occurred at home, there was inevitably a lack of corroboration for some of them and this had shaped the Crown’s approach. He directed the jury that it was not enough for the Crown to describe the events as a single course of conduct; they had to be satisfied of that.

The defence submitted that the incidents occurred over a period of nearly four years and were separate events each of which required corroboration. The Crown suggested that whether the circumstances were a single course of conduct was a question of fact and degree, and this was accepted by the court.

Except in a Moorov context involving mutual corroboration, the phrase “a course of conduct” has no significance in relation to sufficiency of evidence and the individual acts referred to in a charge require to be corroborated.

My final case for this month inevitably involves the application of the Moorov doctrine. In Mohammed v HM Advocate [2020] HCJAC 27 (17 June 2020) the appellant faced three charges at trial: (1) a rape in May 2009; (2) an indecent assault between October 2009 and October 2010; and (3) a rape in December 2009. He was acquitted on charge 1. Charges 1 and 2 were said to have occurred in the appellant’s car when it was parked in the Perthshire countryside. The first charge involved holding the complainer down, lying on top of her and raping her.

The trial judge considered that whilst the indecent assault was less serious than the rapes, there were similarities between the two episodes as the complainers were offered wine he had brought with him and both episodes occurred at night. Charge 3 occurred in the complainer’s flat when she was asleep and incapable of giving or withholding consent. The incidents were close in time.

While at the close of the Crown case there was a sufficiency of evidence in respect of all three charges, once the jury had acquitted of the first charge they were left with two charges where the nature of the allegations, circumstances of commission and locus were all quite different. The similarity of both events occurring at night was neutral. The trial judge had an ongoing duty to review questions of law such as sufficiency of evidence as the trial proceeded. The jury should have been directed that if they acquitted on charge 1 they could not convict on either charge 2 or 3. There had to be an overall similarity in the conduct identifying each charge as a component part of a course of conduct persistently pursued by the accused.  The appeal succeeded and the convictions were quashed. 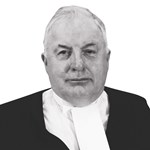