This is the eighth outing for DCI Jim Daley in the fictional town of Kinloch. In the previous book, we left Daley passed out on the gangplank of a yacht, after he had seriously assaulted his wife's former lover, as retribution for rape and domestic abuse she had endured at his hands. We find Daley recovering at home and the PIRC investigation behind him. His wife has moved into the family home together with his young son, but will the marriage survive his wife's many infidelities?

An old woman lives with her three sons and husband in an almost uninhabitable cottage on the coast close to Kinloch. A wealthy hotelier arrives from the US and, we soon learn, is the long lost daughter of the family, who simply disappeared. Why has she returned? Why does her father kill himself so soon after her unexpected arrival? What is wrong with her almost catatonic brothers? A rich Edinburgh lawyer is easing into retirement and his current young business partner has inherited a file from his father, who is ill and has left the practice. On hearing a phrase the young lawyer is to carry out the instructions in the file but to ask no questions, with the prize being untold wealth for the firm. The connection between the two leads to a unique, atmospheric and all consuming thriller.

Daley is assisted by his long suffering but utterly companionable colleague DS Scott. The narrative moves along at a brisk pace and the language used by Scott is “pure dead brilliant”: at time, laugh out loud. Those of us who deal with law enforcement can picture his character being based on several whom we know. Meyrick brings his usual skilful storytelling to the page and gives us another engrossing page turner.

From Our Own Correspondent

A Decade of Dispatches from Across the World 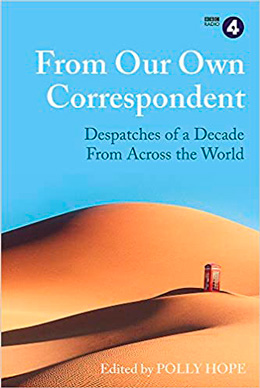 From Our Own Correspondent has been a mainstay of Radio 4 for an astonishing more than 60 years. It runs every Saturday and Thursday mornings, 26 weeks a year. It is currently chaired by Kate Adie, who herself saw many areas of the globe, often reporting in zones of conflict and extraordinarily difficult circumstances.

This book is a rich and absorbing tapestry of writing of the greatest quality, written by those who tell us the story behind the headlines. The short pieces are edited in geographical spheres from the Middle East, Europe, North and South America and ending with a selection of pieces on individual topics, whether Pope Francis or climate change. Each has the beauty and clarity of thought often found in short stories. And, as with short stories, they cause one to reflect on what was not said as well as what was.

We are transported to the Arab Spring in a series of pieces from 2011 until 2018, with reportage from Lyse Doucet, Kevin Connolly and Allan Little. Connolly reflects on the tensions between the Israeli settlers and Palestinians through a short, almost magical, narrative of the impact of the diminishing level of the Dead Sea and River Jordan, highlighting the literal drain on the water but the lack of fairness in its distribution. In a piece from 2017, Aleem Maqbool reflects on the beginnings of the movement towards the removal of statutes. He frames statutes as not merely physical but as telling a “narrative”. Carrie Grace, the former BBC China editor, demonstrates the cult of personality of President Xi Jinping through a tour to a museum of his life; how she told the propaganda official who asked her to sign a document “promising that every word the BBC said about President Xi would be positive”, that she could not; and how the cult of personality of Mao, under which Xi grew up, and which was vowed never to return, has done so in the current President. This is an insightful and thought provoking book.

The Night of Shooting Stars

Martin von Bora is recalled from the Italian front to assist the Berlin police investigate the death of a clairvoyant who was connected to the great and the good of Berlin. However, he reinvented himself as the German state passed through the political incarnations from Weimar Republic to Nazism.

Written in Pastor's inimitable style, the tense and dramatic atmosphere of Berlin is vividly recounted: senior army officers clustered in hotel bars and watchful of Bora. Tension is increased through the character of the police officer assigned to work with Bora but who we are never confident is on his side. An unexpected dénouement awaits the reader. Thrilling.