SARs: where do they end up?

Suspicious activity reports (SARs) must be made where a solicitor carrying out regulated work knows or suspects or has reasonable grounds for suspicion of money laundering. They remain a crucial mechanism for engagement between law enforcement and Scottish solicitors; however, sometimes members of the Scottish legal community query what actually happens to their SARs and just how much use they really are.

FS: Reporters are often unsure of what actually happens to SAR submissions. Can you give us a bit of a rundown from that first moment a SAR is opened by the NCA?

TF: The SAR Enquiry and Action team screen every SAR – more than 72,000 annually. They use keywords or glossary codes to identify SARs regarding vulnerable persons, human trafficking, modern slavery and child sexual exploitation for fast tracking.

Core responsibility of the Defence Against Money Laundering (DAML) team is to grant or refuse requests for a “consent”. They consider thousands of consent requests in a time critical environment, assessing legal implications as well as the welfare and impact on the reporter and the subject. Typically, the team refuses consent where an investigation is underway with a view to restraining assets, therefore refusals can actually help return stolen money to victims and deny criminals the benefit from their crimes.

Relevant SARs are analysed and disseminated by the Terrorist Finance team (TFT), using automated searches for keywords/phrases. Those searches derive from regularly updated counter-terrorist intelligence. Importantly, this work can identify positive hits where the reporter is making a money laundering report while not realising the significance it will have to a terrorist financing investigation.

The International team interrogate SARs data to identify reports linked to a foreign territory or for foreign criminal assets in the UK. They share intelligence with other countries and handle thousands of inbound and outbound enquiries from across the globe.

FS: And some SARs actually end up back with local law enforcement?

TF: SARs which have been triaged as “sensitive” are not available to general law enforcement but are allocated to specialist teams; “integrity SARs” and those relating to politically exposed persons (PEPs) are forwarded to anti-corruption or professional standards teams; and terrorist financing indicators are forwarded to the National Terrorist Financial Intelligence Unit (NTFIU) and the relevant counter-terrorist units.

The SARs database is called Elmer. All non-sensitive SARs (about 99% of total SARs) are made available to local law enforcement seven calendar days from receipt, on tools called Moneyweb, Arena and Discover. These tools allow local enforcement to try to match their intelligence with data contained in SARs, i.e. names, postcodes, bank accounts etc.

SARs are made available to a wide range of law enforcement – not just the police. They can be shared with specialists in HMRC, local councils, NHS, Trading Standards etc.

FS: How long will a SAR be kept for use in the matching process and in other investigations?

TF: SARS are kept on the Elmer database for six years. This information can be accessed by law enforcement as long as the person accessing the database has the correct accreditation to access Elmer.

FS: What do you see as being the key benefits of SARs submitted by legal professionals in particular?

TF: Solicitors are vital due to the diverse areas they specialise in, and often solicitors are privy to information that banks are not. For example, a solicitor SAR might alert us where the client is due inheritance but is the subject of a confiscation order, or they may be dealing with complex international contacts and have submitted SARs which have the hallmarks of trade-based money laundering. 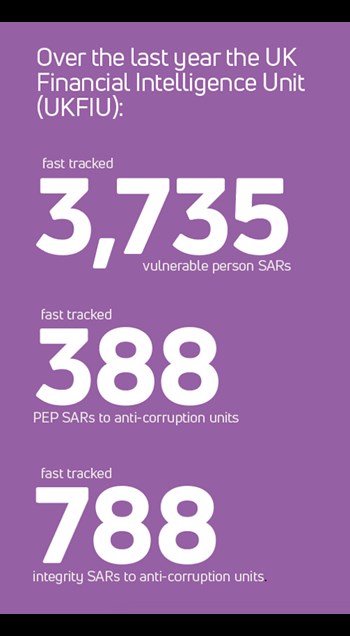 FS: Can you give us any examples of a legal professional’s submission being used?

TF: One solicitor received a request from a foreign lawyer to act on behalf of their client in relation to drafting contracts for the purchase of goods from a UK company. Before drafting the contracts, the UK solicitor received the full payment from the foreign lawyer, who then requested that the funds be paid directly to the foreign supplier of the UK company in order to cut out the middleman.

Using the UK-based solicitor adds unnecessary steps to a trade transaction and adds a further layer to the funds. This layering of high values of funds has the hallmarks of high-end, trade-based money laundering. This SAR generated an NCA alert and investigation.

In another example, a solicitor was in possession of funds which represented a charge on a property in favour of their client as part of a divorce settlement. The reporter was aware that the subject had recently served a prison sentence for drug trafficking and that there was a confiscation order in force in relation to him. The DAML request was refused and local enforcement obtained an uplift order.

FS: So the impact of SARs is obviously potentially far-reaching, but reporters won’t always know what has happened with them?

TF: We are aiming to improve a number of current feedback systems, and the introduction of better feedback loops in the SARs IT transition is something solicitors can look forward to.

Feedback can be limited for a number of reasons. Accidental leakage of information could jeopardise investigations, or years may elapse between a SAR being submitted and it playing a role in an investigation. We deal with thousands of SARs every month and most reporters will realise that 100% feedback is not feasible.

FS: Is it possible to put a figure on how many enforcement actions have been undertaken involving SARs? How is success measured?

TF: SARs contribute in a number of ways and some successes are hard to measure, but a number of successes were outlined in the most recent SARs annual report. For example, over that year £131,667,477 was denied to criminals as a result of DAML SARs.

FS: Solicitors historically file proportionately few SARs. What is your view on low SAR numbers and “quality over quantity”

TF: The UKFIU makes no comment on the relative volume of reports from different sectors. It is for the sectors and their supervisors to assess if the volume of SARs submitted is proportionate to the risks their sectors face.

It is important that Scottish solicitors understand their obligations and the relevant legislation around SARs.

To that end, we recommend taking a moment to visit the dedicated SARs page in our AML site, where you can find some more information as well as our new “Getting it right first time” webinar collaboration with the NCA.

You can also visit the dedicated NCA SARs page.