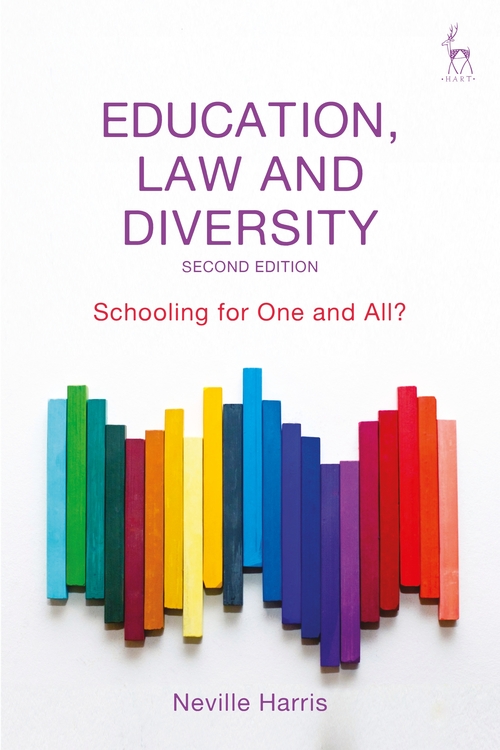 Neville Harris is Emeritus Professor of Law at the University of Manchester, and the legal context and specific legal provisions are always to the fore, but his consideration of the question of education, law and diversity goes so much further than that. It is as much a consideration of the place of education in society as it is a legal textbook. It is a fascinating read, informative and thought-provoking in equal measure, and – unlike a standard legal text – really repays a cover to cover read.

The breadth and scope of the enquiry is one of the first things which strikes the reader, covering all of the protected characteristics one might expect to find, and going well beyond them to consider, for example the rights of transgender pupils, even where they do not fall within the narrower definition of gender reassignment in the Equality Act 2010.

It also covers areas where different interests come into conflict, as where there may be tensions between LGBT+ inclusive education and the religious beliefs of some parents. These tensions are explored in the text, highlighting the issues and the legal and policy contexts in which they arise without getting mired in controversies for its own sake.

The book focuses on the education system in England, while frequently pausing to consider the parallels or distinctions in the other UK countries. In this regard, it is clear that the author has successfully gauged the relevant aspects, certainly of the Scottish education system. The book appears to have been completed in August 2019, but still incorporates references to recent developments in Scotland, including the “broader recognition of the need for engagement with children’s views in the context of education” and the Scottish Government’s commitment to incorporate the UN Convention on the Rights of the Child into Scots law.

Despite this focus, the book remains both interesting and useful to the legal or educational practitioner in Scotland. In many areas, there are significant overlaps or similarities in the law, and both the statute and case law tend to be much more fully developed in England, providing both food for thought and a guide as to how the law might be considered by the Scottish judiciary if the occasion arises. Even this difference of approach is highlighted, with a gentle dig at the Scottish Government approach of undertaking (or attempting) “wholesale reform” without reliance on legislation.

Not that Scottish case law is overlooked, with references being made in cases where the statutory language is the same, as with the rights of parents on both sides of the border to secure that their children’s education is made in accordance with the wishes of their parents. Harris underlines here the tendency of both judiciaries to constrain that broad sounding right in practice. And, of course, what textbook on education and the law would be complete without consideration of the celebrated case of Campbell and Cosans v UK, which took the “ban the belt” campaign from the classrooms of Bishopbriggs and Cowdenbeath to the European Court of Human Rights?

The book is confident in its coverage of recent political and societal developments as well as legal ones, with even the thorny issue of Brexit getting a look in, alongside recent protests at schools regarding sex education programmes. It is at its most interesting and engaging when grappling with the more difficult and challenging issues. Where else would you find a critique of the state’s “gendered response to truancy” alongside a discussion of the role of parents as “consumer-citizens”?

In covering these issues, Harris is not afraid to challenge the reader. The chapter on equal access to educational settings begins with a consideration of racial segregation of schools in the US and the landmark Supreme Court case of Brown v Board of Education of Topeka, before going on to consider the de facto segregation of today’s pupils in the UK by religion, gender, disability and social class. Later chapters pick up this same theme, with a detailed examination of how policies on parental choice in school admission are drivers for further segregation in education, and the criticism by the UN Committee on the Rights of Persons with Disabilities of the UK for persisting with a dual system of special and mainstream schools. The discussion of whether a belief in inclusive education might now be regarded by the courts as amounting to a philosophical conviction for the purposes of article 2 of Protocol 1 of the ECHR is just one of many fascinating socio-legal issues expertly explained and considered.

Indeed the coverage of the various international treaties applicable in this area of law is particularly strong, touching on no fewer than 17 International and European Conventions and other legal instruments, and discussed at length in every chapter.

There are times when the focus of the text on the system in England means that the issues covered are less relevant to the Scottish practitioner, such as in relation to the role of religion within schools and the curriculum, but these are both relatively rare and interesting as a comparative exercise. The book is likely to be of most interest to those involved in education policy, whether at a local or national level, but also for child and family law practitioners who are looking for a deeper understanding of this area.

Education, Law and Diversity is as comprehensive as it is ambitious, easy to read despite being in-depth, and well structured and laid out in just nine (admittedly lengthy) main chapters. A real tour de force!