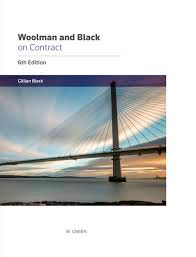 Let’s be frank, contract law suffers from a major image problem. Dull, dry and indecipherable are adjectives that are frequently attributed to it whenever the subject comes to mind (which, for most students, after having completed this core module of their studies, is very rarely).

Woolman and Black on Contract (6th ed) attempts to rectify at least two of these issues – dullness and incomprehensibility – by presenting an introduction to the subject in “a clear and readable style” while still offering a comprehensive analysis of the core principles of contract in contemporary Scots law. The question which remains is, does this volume achieve those aims?

This edition presents its subject matter in a well thought-out manner, which I am sure would allow first time students to come to terms with the various elements of contract law in a logical way. The book moves from the history and theory of contract through formation and all the way to the extinction of obligations in an easy to follow and surprisingly engaging way.

What I found particularly engaging were the couple of paragraphs set aside at the end of each chapter for comparing the position in Scots law with the English counterpart. While this may be of less relevance to the undergraduate student, who is clearly the audience for this edition, this inclusion does not detract from the main focus of the chapter, instead allowing the particular aspect of Scots contract law to be viewed within a broader context. The comparisons with English jurisprudence also provide insight into Scottish judicial reasoning and allow the reader to gain a greater understanding to the logic of Scots contract law.

Chapter 4, on promise, stuck out somewhat for me: it felt rather shoehorned in, as if they didn’t quite know where to put it – although perhaps that’s appropriate given the status of promise in Scots law. It’s a minor quibble, but I feel that, although promise is academically interesting, it doesn’t really deserve its own chapter and could probably be dealt with under a paragraph in the chapter on general formation of contract. The inclusion of a full chapter on promise seems more like a nod to older texts on contract, rather than something necessary in this volume.

One thing that is less of a minor quibble, and actually began to annoy me as I read on, was the fact that the chapter on promise gets a rather handy bullet point conclusion which summarises the key points of the chapter. This really worked for me and I could see that it would be of use to any reader picking up this work as a true introduction to the subject. However, this concluding section was absent from every other chapter in the book.

In terms of readability, this edition does a pretty good job. Black’s writing style is concise and clear, free from the gratuitous circumlocutions and tediously drawn out, ruminative sentences one might expect from a volume on contract. This means that the majority of information in the book is conveyed in easily digestible, short sentences which greatly increase the work’s readability. However, while I am generally in favour of pared-back prose in academic writing, at times Black goes too far in her paring, the result being rather staccato paragraphs that leave the reader feeling as though the grounds of invalidity of contract are being jackhammered into their head. On balance, though, Black’s writing is a benefit to the work.

Unsurprisingly, given her status as senior lecturer in law at Edinburgh University, Black has a knack for providing succinct, apposite examples to illustrate points in question. The way the examples fit within the text gives them the air of a lecturer’s aside, a brief clarification before moving on. Indeed, it is this these asides that show the merit of this work: this might not be the most in-depth work on Scots contract law, but it is an engaging read by a lecturer very much at ease with and in command of her subject.

So, while this may not be the ideal work for practitioners, it does achieve what it claims by presenting contract in a clear and readable way. Furthermore, while it is unlikely that contract will ever shake its negative image, Woolman and Black on Contract isn’t dull.

Trials of the State 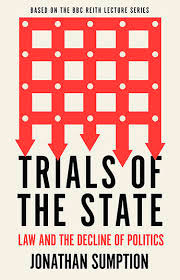 This slim volume essentially reproduces the five Reith Lectures given by Lord Sumption, recently retired Justice of the Supreme Court. As the title suggests, Sumption forensically examines the question he poses: “Once we have found out what the law is, what makes it legitimate?” He explores the relationship between the judiciary, executive and legislature at a time when, as he writes, “the debates on Britain’s relations with the European Union have brought to a head many constitutional issues that were latent for years before the referendum of 2016”.

Lord Sumption records the vastly increased availability of law and its encroachment on everyday life, leading to an increased conformity of compliance, not all for the betterment of society. He questions whether there is a price to be paid for the judiciary filling the gap left by politics and politicians. He sets out the recognised basis of parliamentary sovereignty which, through political representation, has thus far provided a basis for legitimacy in the law, with consensual politics and policies ordinarily deriving from the democratic framework. However, the referendum has thrown that consensus into sharp focus and deep tension given the political approach that “winner takes all”: “if it did, it would harbour large and permanently disaffected groups in their midst, who had no common bonds to transcend their differences with the majority.”

As he explains, “democracies operate on the implicit basis that, although the majority had authorised policies which the minority rejects, these differences are transcended by their common acceptance of the legitimacy of its decision making processes”. Lord Sumption explains that the choice of a referendum on the question of the UK’s relationship with Europe has led to the inability of politics to produce compromise, as “a referendum obstructs compromise, by producing a result in which 52% of voters feel entitled to speak for the whole nation and 48% do not matter at all”.

He explains that despite the political impact of the decision in R (Miller) v Secretary of State for Exiting the European Union [2018] AC 61, “the result was an orthodox application of the longstanding constitutional rule that only Parliament can change the law”.

The author offers the view that the courts “have developed a broader concept of the rule of law which greatly enlarges their constitutional role”, but, in applying that approach to the rule of law, may “confer vast discretionary power over truly political issues on a body of people who are not politically accountable to anyone for what they do”.

Lord Sumption also considers the role of human rights, both its application by the Human Rights Act 1998 and the judgments of the European Court of Human Rights, which, he argues, has developed the Convention into “a form of non-consensual legislation”. In looking at article 8, he advances it as “the most striking example of mission creep”, having been “designed as a protection against surveillance state in totalitarian regimes”, but becoming, in practice, by the court, a “principle of personal autonomy”. His analysis on the practical application of the “noble values” of the Convention leads him to conclude: “the result is to devalue the whole notion of universal human rights”.

He also observes: “Law had its own competing claim to legitimacy, but it is no substitute for politics.” This is an absorbing and timely study on the roles of the judiciary and legislators, with a call for a radical rethink about judicial activism or, at least, increased awareness that there is a danger, even with a written constitution (which will surely become a topic for discussion in light of the pressures the UK constitution has faced over recent years), that the judiciary ought not always to be given the final say for fear of unwittingly alienating an already increasingly disengaged populace. Lord Sumption paints a bleak picture of a mature democracy, but one, no matter one's own views, that is essential reading.