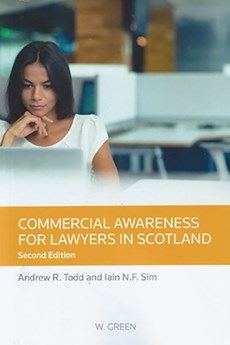 A second edition of a successful book very often involves little more than a tweaking and updating. It is very much to the authors’ credit that this edition has been significantly restructured, rewritten, and consequently, greatly improved.

The introduction to the first edition stated that it was written for students, trainees and new lawyers. That’s not expressly stated in this one, which I think is sensible. There is a mass of useful material which will serve any lawyer well, from student level up to junior partner. No dry academic tome this, but a highly readable book, full of real examples and personal anecdotes. Not many senior lawyers have the confidence to allow others to laugh at their own youthful errors as Andrew Todd does. These practical and believable scenarios make it clear that the authors have experience as well as expertise, though I would be willing to wager that neither of them has been a litigator.

Some of the great intangibles of commercial awareness, such as building (and destroying) a reputation, are thoughtfully considered. The dreary subject of money laundering is dealt with in a crisp, well written chapter. Of particular benefit is the section on professional standards. Each of the principles is considered in some detail, with excellent examples of how to watch your back – something that no degree or diploma can adequately teach.

The financial section is very much improved, parts of it requiring some work on the part of the reader. There is one point, however, which has not changed from the last edition, and that is the specimen balance sheet. While the text correctly states that the balance is that a firm’s assets less its liabilities represents partners’ capital, the worked example proclaims it to be a mixture of “Drawings” and “Profit and Loss Account”. My own accountant, who specialises in legal firms, described it as weird.

Messrs Todd and Sim have not been well served by their editors. Apostrophes are incorrectly absent in some places; inexplicably present in others. A solicitor’s most precious possession is persistently referred to as a practicing certificate, and even an innumerate sub should have noted that 1% of £200,000 is not £4,000.

But I can live with these errors when the substantive content is of such high quality. Fairly early in a lawyer’s career he or she has to do some serious thinking about the next stage. Chapter 17, on goal setting, is excellent – I wish I’d known about SMART targets when I was 25. Probably every lawyer of whatever age could learn something from the sections on time management and delegation.

I had some reservations about the first edition. My only recommendation about this one is that every law student and junior lawyer should acquire a copy and benefit from its practical wisdom.