Sport briefing: a bill before the Scottish Parliament will clamp down on unauthorised ticket selling and advertising while matches are taking place in Glasgow next summer
9th December 2019 | Andrew Maxwell

The UEFA European Championship (Scotland) Bill has been introduced in advance of next summer’s EURO 2020 when, along with other venues across the continent, Hampden Park will host four matches. The bill is currently working its way through the Scottish Parliament and has won the backing of the Culture, Tourism, Europe & External Affairs Committee.

It is recognised that hosting EURO 2020 will bring economic benefits to the city of Glasgow and Scotland more widely. Scotland, and Glasgow in particular, has hosted a number of major sporting events over the last decade, with EURO 2020 following the successful Commonwealth Games and Ryder Cup in 2014, last year’s European Sport Championships and this year’s Solheim Cup.

The bill has been introduced in line with UEFA’s own guidelines and seeks to achieve a number of objectives, including protection of UEFA’s commercial rights and prohibition of ticket touting as well as giving officials the ability to enforce these provisions.

It consists of the following main components:

Football tournaments have been a target for ambush marketing in the past, with notable incidents involving Dutch fans at the 2010 World Cup, and at EURO 2012 Danish striker Niklas Bendtner, who received a significant fine for revealing boxers with the name of a well known Irish bookmaker during a goal celebration. UEFA’s own guidelines for host cities for the upcoming tournament seek to restrict access to advertising and street trading within certain event zones.

The bill before the Scottish Parliament follows these UEFA guidelines, and as a result it expressly prohibits street trading and advertising within event zones. Any unauthorised street trading or advertising will be a criminal offence subject on summary conviction to a fine not exceeding £20,000. The event zones stipulated within the bill are Hampden Park, where games are being hosted, and George Square and the Merchant City which will host fan zones for visiting fans.

Even those who have an existing trading licence will be unable to trade in the affected zones.

There is protection for fans, with measures to combat ticket touting, as the bill ensures that reselling Championship tickets for an amount over face value or with a view to making a profit is a criminal offence. This section also applies to acts done outside Scotland, i.e. where the ticketholder attempts to sell a ticket online and is based in a different jurisdiction. The penalties for ticket touting are not as harsh as for unauthorised advertising or street trading, although those found guilty of an offence will be liable on summary conviction to a fine not exceeding level 5 on the standard scale (currently £5,000).

Finally, the bill introduces new powers so that the new offences it creates can be effectively enforced. Enforcement officers will have powers to seize, conceal or destroy any article which infringes the Act, and to enter and search premises subject to use of reasonable force, although these are strictly regulated by the bill itself.

Those who operate within the designated event zones will need to be wary of the restrictions introduced by the bill to ensure they do not fall foul of them during the tournament.

The bill completed stage 2 of 3 on 28 November 2019, with various amendments being suggested by MSPs. It will now move on to its stage 3 debate and possible further amendments, and then a final decision on whether it should become law.

The Scottish national team may yet be competing in the tournament, subject to navigating a playoff or the expulsion of the Russian team due to doping irregularities. It is hoped that by introducing and publicising the bill in advance of the tournament, the focus will be on events on the pitch as opposed to those off it. 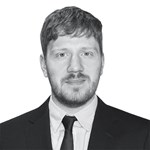