Expert determination as a means of resolving disputes is growing in use; but attempting to provide for finality is potentially problematic in itself, and subject to strict interpretation by the courts
9th December 2019 | Gareth Hale, Fiona Caldow

Expert determination is increasingly well recognised as a means of resolving commercial disputes. It is a process in which the parties to a dispute appoint an independent expert in the subject matter to resolve a particular issue.

Expert determination is well suited to issues of valuation. It is commonly adopted in rent review provisions in leases, as well as in shareholder agreements where provision is made for the valuation of shares. It is also well suited to disputes of a technical nature, such as whether machinery, equipment or software accords with the specification that parties have agreed.

The process of referring a dispute to an expert is generally regarded as having several advantages over litigation. In most cases, it is quicker and cheaper than court proceedings. The process is also confidential, enabling parties to keep the details of their dispute private.

A creature of contract

Expert determination is entirely a creature of contract. It is not supported by any statutory framework and so the expert’s remit and powers are dependent on what the parties have agreed in the contract between them (or otherwise).

As a result, the extent of an expert’s remit and powers is a matter of contract interpretation, as is the question of whether an expert’s determination is final and binding. This has been illustrated in recent cases before the Scottish and English courts.

When do courts still have a role?

The courts will not readily conclude that their jurisdiction has been ousted by a contractual provision providing for expert determination. Ashtead Plant Hire Co Ltd v Granton Central Developments Ltd [2018] CSOH 107 concerned a dispute between a landlord and a tenant as to the correct interpretation of rent review provisions in a lease. The parties disagreed over the correct interpretation of “the leased subjects” and the assumption and disregard provisions.

The question for the court was whether these issues of interpretation fell within the court’s jurisdiction or were remitted exclusively to the expert to determine.

Lord Doherty concluded that, on a proper construction of the lease, the parties did not confer exclusive jurisdiction on the expert to decide, as a matter of law, what “the leased subjects” were, or to decide the legal effect of the assumptions and disregards. The natural and commonsense reading of the lease was that the expert was to carry out his functions on the basis of the correct interpretation of the lease’s provisions. It was for the court to determine what the correct interpretation was.

A similar approach was taken by the Court of Appeal in the recent case of Great Dunmow Estates Ltd v Crest Nicholson Operations Ltd [2019] EWCA Civ 1683. The question in this case was whether an expert valuer had jurisdiction to determine the correct valuation date in an agreement for the sale of land. The claimant sought to set aside the valuation arrived at by the expert on the basis that the contractual valuation date was a question of law and therefore a matter for the courts. The Court of Appeal concluded that the wording of the agreement did not give the valuer jurisdiction to determine which of the competing valuation dates was correct, nor did it exclude the rights of the parties to refer that question of interpretation to the courts.

These cases show that questions of interpretation are regarded by the courts as questions of law (or sometimes questions of mixed fact and law), and that the courts will usually be willing to get involved in determining the correct interpretation. On the one hand, the courts’ approach is to be welcomed – judges with the benefit of reasoned argument from both parties’ representatives have the best chance of arriving at the correct interpretation when matters of law arise. However, it is a double-edged sword, with the anticipated benefits of adopting a quick and low-cost dispute resolution process likely to evaporate rapidly.

This means that, when disputes arise, some careful consideration is needed prior to sending your papers off to an expert. What precisely is being asked of the expert? Is an interpretative exercise involved? If so, can a joint remit to the expert be agreed? Or is there disagreement as to the correct interpretation of a key provision? In the event of such disagreement, it may be necessary to ask the courts to determine the correct interpretation prior to referral to the expert.

It is possible, although less common, for a contract to be drafted in such a way that the expert’s remit is to include questions of both fact and law. Where contracting parties wish disputes to be addressed solely by an expert, regardless of whether or not questions of interpretation arise, the lesson from the case law is that very clear wording is required to achieve that result.

A final and binding decision?

Cine-UK Ltd v Union Square Developments Ltd [2019] CSOH 3 is another recent decision concerning the interpretation of a rent review provision. The landlord and tenant were unable to reach agreement on a revised rent and so, in accordance with the lease’s provisions, the question was referred to an independent surveyor for determination. The lease provided that the surveyor’s decision was to be “final and binding on the parties hereto both on fact and law”. Notwithstanding this “finality provision”, the tenant challenged the surveyor’s decision on the basis that she erred in law.

In her judgment, Lady Wolffe recognised the rationale underlying provisions conferring finality on decisions of experts. These included the benefits of speed, certainty and finality. Lady Wolffe stressed that it was a matter of contractual interpretation whether parties have conferred exclusive jurisdiction on an expert to determine questions of both fact and law. In this instance, it was concluded that there was no ambiguity in the finality provision, which “could not be clearer in its terms”.

This conclusion was, according to Lady Wolffe, reinforced by the fact that the lease did not require the expert to give any reasons for her decision. Therefore, if parties clearly communicate an intention in their contract drafting to oust the jurisdiction of the court on matters of fact and law, that will be respected by the courts.

In any event, Lady Wolffe was of the view that the expert’s determination contained no discernible error of law.

Cine-UK illustrates that this type of finality wording closes the door completely on challenging the way in which the expert has reached his or her determination. Lady Wolffe agreed with the landlord’s position that, even if there had been an error of law, the expert’s decision was final and conclusive unless it could be shown that the expert had not performed the task assigned to her. Here, the task assigned to the expert was to determine the new open market rent, and she had done just that.

A finality provision should therefore be very carefully considered and explained to clients before being adopted in a contract. The dilemma is that it is a double-edged sword – while speed and certainty have their benefits, the inclusion of such a provision means it is the end of the road for a party left with an outcome they really do not want. 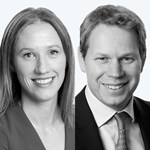