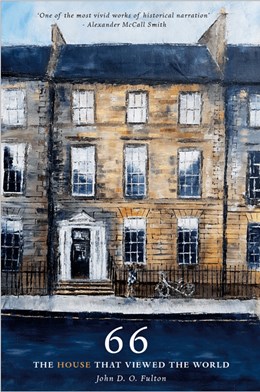 For many years, John Fulton practised at 66 Queen Street, then the offices of Tods, Murray & Jamieson WS since 23 May 1856. In this enlightening book, he uses that building as the fulcrum to tell, in a clear, erudite and engaging narrative, of the life and times of Edinburgh and the wider world and their attachment to the bricks and mortar of the building.

We are gently guided through the connection between the John and James Williamson of the building of 66 Queen Street and the White House; have ringside seats on the trials undertaken at the instruction of Thomas Graham Murray and his junior partner Auldjo Jamieson, who were successive Crown Agents to the Lord Advocate, and the civil case of the Duchess of Argyll, who was represented by partner of the firm Jack Macfie.

There is more. We accompany the Lord Provost of Glasgow and his retinue of 15 members of the magistracy who took over the then house on the occasion of George IV's memorable visit to Edinburgh in 1822, inspired by Sir Walter Scott. That chapter is a superb example of how Mr Fulton develops the narrative, taking us through the Scottification of the event which, given its timing, encouraged a view of the Scots and Scotland enshrined to this day in the Highlands and Highlander, with the King wearing a kilt. Of the trials, we watch as the City of Glasgow Bank management face trial for a colossal fraud, resulting in imprisonment in the prison at Calton; and the conviction of Eugene Chantrelle (an acquaintance of Robert Louis Stevenson) of the murder by poison of his wife at 81a George Street, with the then rudimentary forensic evidence.

There is only one recommendation. In these uncertain and unsettling times, buy a copy and relish all that Mr Fulton offers in this superb book.

As a person who has been stopped a few times by landowners/gamekeepers and had to stick up for my rights, I have made sure I have had a reasonable understanding of the Land Reform (Scotland) Act 2003. This book really confirmed to me that my arguments were valid and that I was in the right and acting reasonably. To make my life easier I may in future just hand out copies of the book and walk on!

However, although it is difficult to condense legal argument into a brief résumé, the book did at times have legalistic language that was a bit difficult to digest. At times I was not clear if I could or couldn't conduct certain activities, for example flying drones on private land: are drones prohibited motorised vehicles as argued by some landowners, or is flying a drone just a recreational activity and therefore allowed? Overall I am likely to refer to the book again, but it would be of most use to professionals rather than the layperson. Of critical importance, the author suggested that we must all continue to exercise our rights, and I for one will do so.