A career in public service, and public law, has led to an in-house role at the heart of the judiciary for our interviewee this month
6th April 2020 | Andrew Campbell

Tell us about your career path to date?

My path initially led away from law as – in a story many will recognise – I struggled to get a traineeship and had resolved to try something else instead. But Aberdeen City Council took me on and I learned a huge amount from a dedicated bunch of professionals doing good work in often trying circumstances. They were always patient with me despite my constant questioning, and working with them cemented my desire to work in public service.

Having studied human rights and constitutional law for my degree, I remain very interested in the topic. To work in those areas really means working in central government, so when there was a recruitment drive at devolution, I had to apply. I was selected and my first posting was to the newly established Advocate General’s office.

I spent seven years advising the UK Government on any and all aspects of Scots law, including two fascinating years in London with the UK law officers, and was promoted. Civil servants can typically be sent anywhere, and in 2007 I found myself in the Scottish Government leading a team of three clever lawyers doing public sector pensions, higher education and energy law. The only common thread I ever spotted between those topics was that they were all complex.

I then became the first legal adviser to Transport Scotland and established a multi-disciplinary team at its Glasgow headquarters. I’m particularly proud of the legal and policy work the team did to facilitate the Forth Replacement Crossing. Thereafter I spent five years doing criminal justice, police and fire work and was fortunate to be involved in some very high-profile and often fast-paced work.

Before the 2014 referendum, I did a short stint in policy working on external affairs and pre-independence planning work, and then submissions to the Smith Commission on the devolution of international affairs. After that finished, I returned to the Scottish Government Legal Directorate to help with the Land Reform Bill in 2016. Working in policy has given me a much better insight into the challenges clients face.

Working for the Lord President had been on my career list for a long time, so when the chance to work in the Private Office came up in 2016, I jumped at it. I was head of the legal secretariat there until late last year when I was promoted to Legal Secretary to the Lord President.

What does your current role involve?

The title is somewhat Yes, Minister, in that we have a lot of “secretaries”, none of whom are actual secretaries. Jobs in the civil service supporting office-holders, such as ministers or in my case judges, perform a secretariat function. Hence my title is Legal Secretary and my team are all called deputy legal secretaries.

The Legal Secretary role is first and foremost about providing legal advice to the Lord President and the judiciary in relation to his and their non-judicial roles. This means supporting the Lord President and the President of the Scottish Tribunals in their roles as head of the judiciary and of the Scottish Tribunals. But the role is much more than that, and involves policy, judicial conduct questions, legislative drafting, parliamentary liaison, etc, and, ultimately, representing and communicating the Lord President’s interests. In all this, I work closely with the Director of the Judicial Office for Scotland, Tim Barraclough.

It’s worth saying that there is no such thing as an “LPPO view” on something – everything we do is seen and cleared by the Lord President and represents his view, not ours. It can come as a surprise to people that we put their emails or letters to him to see, warts and all. As the Scottish Courts & Tribunals Service is judge-led, some of my time as a director is also spent advising SCTS on corporate matters that have a judicial angle.

What motivates you when you head to work?

Doing a good job, continuous improvement, the fact that every day is different, making a difference on the macro issues facing the judiciary, running an office with similarly motivated people… I could go on.

What has been the biggest challenge or change for you in the Government Legal Service for Scotland? And the greatest reward?

The biggest change has been the level at which work is done and the type of work. When I started in the GLSS, only a select few did advisory or legislation work and there was a lot of contract, conveyancing and litigation done in-house. Now, a lot of that work is outsourced and the legislative demands have increased such that legislative drafting, instructing bills and advisory work have to be done by all grades of lawyer and are a central part of the business. That’s a positive and necessary change and makes for a more rewarding diet for all. It also means those doing litigation and contract work are able to narrow their focus.

What advice would you give lawyers who want to start a career in the GLSS? What makes a good Government lawyer?

When asked this, I have always said: if you want to work in public law, study public law. If you want to do well, you have to be interested in it and you have to be motivated by public service. As to what makes a good Government lawyer, I’m not qualified to answer, but the many I have worked with all possess attention to detail, honed research skills, intellectual curiosity, inventiveness, emotional intelligence, dedication and confidence to do the right thing, and a sense of humour. I’m sure anyone in an in-house role will readily identify with those traits, and more.

What is your most unusual/amusing work experience?

There are plenty, but the oddest and funniest experiences are definitely subject to the Official Secrets Act. Working in Dover House in London was certainly the most surreal. To be told that the place wasn’t nearly as eccentric to work in as it used to be while, for example, watching an official run a wine business from their room using the only secure fax machine, certainly made me wonder what went on before.

What are the current “hot topics” in LPPO?

Judicial independence, judicial recruitment and regulation of the professions are some of the big constants for the Lord President. In terms of current projects, we provide advice to the Scottish Civil Justice Council and are busy working on group proceedings rules for the Court of Session as well as implementing the rest of the Civil Litigation Act 2018. Things have been busy for several years around family law, and there is a lot of work on the criminal side too with summary criminal justice reforms. There is a steady workload integrating tribunals into the Scottish Tribunals structure. The Lord President’s Court of Session Modernisation Group has also kept us busy.

What are the key challenges for teams such as yours in 2020?

Resourcing is the number one challenge. Budgets are both tight and uncertain. Even where there is financial headroom to recruit, sourcing lawyers with the right skills is not straightforward.

Brexit is expected to move to its next phase at the end of the year. While we know it has little impact on the court rules at the moment, we will need to move relatively quickly to align the rules with whatever the underlying substantive law becomes once the transition period ends. We’re as prepared for that as we can be, but the anticipated timescales will be undeniably difficult.

Lawyers aren’t generally seen as innovative. Would you agree? What have you done that has been innovative or resulted in process improvements?

At an individual level, I disagree. I think people, including lawyers, are generally innovative, but the structures they operate in are subject to inertia. It’s trite that the bigger the organisation, the greater the inertia.

We have had some success in improving the quality of our legislative output, with only one minor drafting error in the last two-and-a-half years or more of legislating. Pride comes before a fall, and there will be errors in future, but the goal is to reduce them as near as possible to zero. We’re in a different place from where we were, and Parliament has acknowledged the turnaround. The improvement is down to re-framing what “acceptable” looks like, taking pride in quality, and a bit of coaching.

But, as a small office, we are fortunate we can try things out quickly and see what works and what doesn’t. I’ve always been keen that we try new ways of doing things; some won’t work but that’s a price well worth paying for the ones that do.

Is the in-house sector well represented in terms of equality and diversity? What improvements could the profession make in these areas?

I’m not in a position to comment on the wider sector, but my personal sense is that we have many more miles to travel than we have behind us. The pipeline is key: one can only recruit from the pool of lawyers produced by the universities and, in turn, they can only recruit from the applicants they get from schools. In my view the conversation needs to include the education sector if we want a profession more representative of society at large.

As a disabled person, I would caution against initiatives that focus on one protected characteristic. At times it can feel that protected characteristics are competing against each other, when inclusivity is the prize. I would like to see the profession develop a strategy for achieving inclusivity, with an action plan for delivering it on a bold timescale and regular reporting on achieving target outcomes. If we are serious about it, we need to take it seriously.

How have attitudes and working practices changed in the law since you started out?

The first legal office I worked in had no computers: the secretaries had typewriters and dictation took a week to come back to you. When I took my laptop into work one day, I was regarded as a yuppie practising witchcraft and nearly triggered a strike. Dressing down was theoretical, work was addressed to me by my surname, and the idea of a man going part-time was outrageous. Now we’re positively encouraged to work from home and I really value the fact that I work compressed hours and get to spend time with my children.

It’s trite, but I love the variety and the intellectual challenge of my job. As you get older, what makes you happy at work isn’t so much the work as the people you work with, and I’m very lucky to work with such a lovely bunch. At the end of the working day, I like to listen to some relaxing deep techno on the way home to prepare me for speaking to my kids. 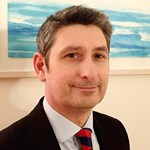