Rise of the machines

Is artificial intelligence an existential threat to the practice of law as we know it? The author recognises its potential, but believes there are limits
6th April 2020 | Joe Boyd

In 2016, Deloitte published a report entitled Objections Overruled – the case for disruptive technology in the legal profession. This considered the overarching question as to whether the law was an exception to other areas of business, which had already seen “the digital revolution and the internet… turn almost every business on its head”. In not only answering this question in the negative, the report went on to make some extensive and uncomfortable predictions for the legal profession indiscriminate of jurisdiction or practice area.

The starkest conclusion in the report, particularly from a human resource point of view, was undoubtedly that around 114,000 legal jobs were likely to be automated, in other words made redundant in favour of technological resources, in the following 20 years. Given its date, we are nearly a quarter of the way into this period, and the Financial Times coverage of the report at the time noted that the year 2020 would be a “tipping point” for law firms in this regard.

Let us be clear about the basis of this prediction, primarily from a cost and efficiency perspective: already developed technology can carry out certain tasks at least as effectively and more efficiently than “an army of junior lawyers doing repetitive search and verification work” on behalf of clients. The report goes on to state that hourly rates at leading UK firms have risen almost tenfold over the past 20 years. Indeed, “eye-watering fees that machines do not charge”. Certainly not after the upfront purchase and maintenance costs at any rate.

It’s happened to others

At first reading, this rationale may not seem too outlandish or difficult to digest. The vast majority if not all of us now use smartphones and other devices in our daily professional and personal lives, which serve to manage our lives far more efficiently and cheaply than before. Furthermore, this has had a profound knock-on effect on the business areas concerned, at least from a staffing perspective. Take banking as an example. We can now carry out a wide range of transactions from our devices alone, and the large extent of both branch and telephone centre closures across all banking groups as a result has been well and widely documented. Banking staff are simply not required to facilitate these transactions in anywhere near as great a number any longer.

Why should the law be different?

Surely a winning distinction that the legal profession could always rely on to combat the threat of our jobs being replaced by artificial intelligence is in the unpredictable and indeed human nature of our work. I emphasise the word “human” to suggest that humans are not pre-programmed like our soon-to-be technological colleagues. We do not operate on structured algorithms or formulas, and indeed the factors that often lead to distinguishing one human from another, especially in the context of legal proceedings, can be very subtle and finely nuanced. As a general court practitioner myself, this can certainly be applied to dispute resolution. Or can it…?

Judged by our IT?

In Scots law, of course, the respective standards of proof in criminal and civil cases are beyond reasonable doubt and on the balance of probabilities. I often describe the latter to clients as being one party to an action tipping the scales by at least 51% to the other party’s 49% as being sufficient for an action to be proven in their favour. The decision maker just has to be satisfied that the claim is “probably” made out to find in their favour. Surely the adversarial and often purely human nature of factors involved in disputes can only be effectively understood, determined and resolved by other humans, particularly given the often very fine balance between the evidential and credibility differences of the respective positions, which can only really be effectively determined on their oral testimony in front of the judge?

Not necessarily, states the report. Technology is described as having one thing in common with the law itself: impartiality. Furthermore, when it comes to judicial proceedings, records of human decisions are capable of an objective technological analysis. Whilst the report concedes that the notion of artificial intelligence outperforming human intelligence in predicting legal outcomes still meets resistance, “the fundamental concept has already been established beyond doubt”. One example highlighted was carried out at Michigan State University and the South Texas College of Law, where an algorithm was created to predict historical Supreme Court verdicts using data only available prior to the making of the decisions themselves. The programme predicted over 69% of the decisions correctly, which was also higher than comparative human expert panel prediction rates.

Can this method ever be adjudged proficient enough, however, to determine often very complex and contentious cases in place of human decision makers themselves? In his book Online Courts and the Future of Justice, published in 2019, Professor Richard Susskind argues that in most advanced legal systems, the resolution of civil disputes in particular takes too long and costs too much. Further, more people in the world now have access to the internet than access to justice. Whilst he advocates for the enhanced use of technology in the establishment of “online courts”, he defines these as the determination of cases by human judges but not in physical courtrooms, thus stopping short of the notion of artificial intelligence being used to determine cases in isolation.

But would this simply be the first step on the road to such an outcome? I for one certainly hope not. The courts in Scotland are already embracing technology to assist with the wider process of justice, for example facilities for vulnerable witnesses to give their evidence via video link from a remote location. And with the advent of the Civil Online service, parties to a simple procedure claim can manage the progress of their case via the relevant online system. No doubt further technological advances will serve to enhance and improve the determination of justice in the future, and this will perhaps occur sooner than we think, due to the unprecedented measures that are having to be taken at the moment to use technology to continue to determine legal disputes during the coronavirus crisis.

However, these should be used to do just that: enhance and improve the existing system, rather than to remove and replace it with technology and artificial intelligence at its heart. This, I suggest, is necessary to maintain trust and the appropriate degree of objectivity and discretion in the system of determining both criminal and civil court cases, and for natural justice to be seen to be carried out by natural persons, whether they be judges sitting alone, or as part of a jury.

In its regulation of the Scottish legal profession, the Law Society of Scotland carries out this function mainly in response to the actions or inactions of the solicitor or human entity itself. That is to say, if a legal practice unit (firm) fails to comply with the accounts rules, for example, the Society can take the necessary and appropriate action against the solicitor who is responsible for that area of the practice. Furthermore, and perhaps more important to the issues of transparency and effective due process, where a client has concerns about how their particular case has been handled and makes a complaint to the Scottish Legal Complaints Commission, if it is found to raise a question in relation to the solicitor’s conduct, this is referred to the Society to investigate and determine via its conduct complaints process.

This surely begs the question, how can actions or decisions made via technology and artificial intelligence be effectively regulated and, more importantly, how can these methods be appropriately held to account for any apparent failings? I suspect this will be an even greater difficulty to address. For instance, could we justify holding an individual human solicitor to account for apparent failings attributable to technological or artificial intelligence steps in the process? We certainly could not, based on the present regulatory regime, which is designed to address the specific conduct of the individual solicitor involved in the issue complained about.

We have been gradually realising the future questions that will require to be addressed and answered with regard to the enhanced use of technology and artificial intelligence in the profession. In September 2019, the Society launched a brand new accreditation for legal technologists to work on and consider these very issues further. In February 2020, the Society conferred this accreditation on the first non-lawyer, thus broadening the potential for expertise in this vital area.

Whilst it is clear that technology and artificial intelligence will continue to become more advanced and indeed more capable as time passes, I consider that not just the legal profession, but wider government in general, must show due care in considering the parameters and extent to which these can be employed most effectively and efficiently in procedures, for example in determining disputes between humans. As far as the Scottish legal profession is concerned, we should not lose sight of the fact that the law as we know it has been built up over hundreds of years of jurisprudence, from decisions made by those considered to have had the best legal brains. Law and legal precedents are made according to the particular rules and standards laid down by society at the particular point in time, and these are not set in stone. Thus the law has changed and developed in line with advances and changes in the attitudes held by humans collectively.

Technology and artificial intelligence should, and I am sure will, be used in the future to continue to improve the decision making process. I sincerely hope, however, that our society will retain the independence of the judiciary and the judicial decision making process, reserved as it is to humans – even though, ironically, concerns around judicial independence have usually arisen from apparent executive interference, and not as yet from the rise of machines. 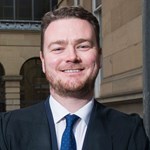 Joe Boyd is principal of Joseph G Boyd & Co, Edinburgh, convener of the Professional Conduct Subcommittee of the Law Society of Scotland and a solicitor member of its Regulatory Committee