In the preface to this book, the author is at pains to point out that it is not intended to be an academic work but rather is aimed at civil law practitioners. That is as may be, but a work such as this has been much needed given the challenges to previously accepted views in recent years. The law is stated as at 1 December 2019.

As stated in chapter 1, the book focuses on “negative prescription”. Chapter 1 also contains a useful comparative review of how other jurisdictions deal with the question of when claims can no longer be pursued through the courts after the passage of a specified period of time.

Set out in eight chapters, the book covers the basic law before getting into the meatier issues as to when the clock starts to run, and interruption and suspension of prescriptive periods, in chapters 3 and 4. As the author states, in some marginal cases, the difference between a claim having prescribed or not can often be down to the way an action is pled. Guidance is also given at the end of chapter 3 in relation to determining when the prescriptive period is likely to be held to have started. That then leads to an analysis in chapter 4 of how to determine whether the prescriptive period has been interrupted in any way. It is not long before an earlier reference by the author to Schrödinger’s Cat is explained in the context of the possibility of a claim being both prescribed and not prescribed. At this point, one is likely to make a cross reference to Wikipedia – and then regret having so done once one enters the realm of quantum mechanics! In essence, it is a form of “legal limbo”.

Chapter 5 then considers the so-called “discoverability test” which has been concerning practitioners in recent times. This is a very useful analysis of previously held views of s 11(3) of the 1973 Act and the judgments in Morrison v ICL Plastics Ltd in 2014 and subsequent cases, which the author suggests operate harshly in most circumstances now.

Chapter 6 deals with questions of interpretation of contracts governed by foreign law where the Scottish courts have jurisdiction.

The author deals with the rationale behind reform of the law of prescription in chapters 7 and 8 – this having been a matter of interest to the Scottish Law Commission given the passage of time since the 1973 Act came into force. The issues raised by Morrison highlighted the need for reform. The SLC recommendations as to the discoverability test are summarised, and the author then considers other aspects of the reform proposals which led to the enactment of the Prescription (Scotland) Act 2018, which is not yet in force. As the author states, transitional arrangements will require careful consideration. It is hoped however that the Act will remove some of the unfairness caused by case law in recent years.

This is an easy to read book on a subject which can hardly be described as simple to understand, and in achieving that result, the author is to be commended. Personally, I should have liked the book to have contained an index but I accept that this is not always possible in such publications. Against that slight criticism, there is good use of footnotes throughout the text. 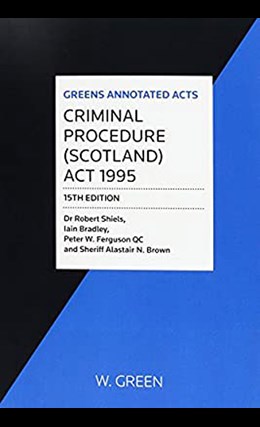 Now in its 19th edition, in the absence of a portable edition of Renton and Brown or the criminal procedure chapter of the Stair Encyclopaedia this is the essential text for any criminal law practitioner or, indeed, anyone who even rubs up against the criminal courts. This edition is bang up to date and the authors have captured the recent decision of McDonald v HM Advocate and the Appeal Court’s opinion on the proper approach to s 275 and the so called “rape shield” provisions. As always, the authors give an authoritative analysis of the Act and discussion of the most relevant case law.