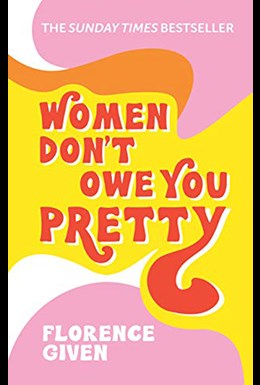 Women Don't Owe You Pretty is the empowering debut novel by Florence Given. With a huge number of themes ranging from breaking the stereotypes placed on women within society, encouraging women to stop leading their lives for the approval of the male gaze, and self love, Given speaks of her past experiences to help readers re-evaluate their own lives. This book will make you question the social norms and events that occur in day-to-day life and which root from a patriarchal society, and guide you on how to break the cycle to make the world an easier place to live in.

Given's work is inclusive and talks about all women regardless of race, sexuality, disability or shape, making it a safe space for all. The strong narrative comes off as harsh from time to time and some of the same points are reiterated throughout the book, but this shouldn't put the reader off this challenging yet necessary read for people who want to learn more about becoming a feminist. As a young woman who has just stepped foot into the “real world”, I found this book eyeopening and very useful, as it educated me about issues I will likely face within our society, in a way that school never did.

Given's own funky illustrations compliment the book beautifully and help to break up the text, making it an easy read. Florence Given is the big sister you never realised you needed, and her novel will make you see the world as you knew it, through a completely new perspective. If you want to learn how to love yourself a little more and make the world an easier place for everyone to live in, this book is for you! 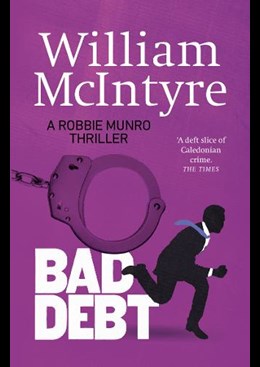 Crime novels are supposed to have good guys and bad guys; everybody knows that? And Robbie Munro, defence lawyer, in his sixth outing, is one of the good guys, right? Ah, if only life were that simple.

Fans of Robbie Munro will know that nothing is ever straightforward in his life, and the events in Bad Debt are even more convoluted than usual. It's probably down to Robbie's professional success that he is acquainted with so many less than solid citizens, but they've never conspired to smooth his path through life.

One thing, however, is certain: there will always be something to amuse you. Willie McIntyre has deftly crafted a cast of characters through whom all manner of non-PC opinions can be channelled. There's Robbie himself, with his barbed comments about the state of the Scottish criminal justice system and those who administer it; his dad, a retired police sergeant and spokesman for everything old school; his brother, ex-football star Malky, very much of the blue side of the Old Firm; and even daughter Tina, extraordinarily perceptive for one so young.

Take but a couple of examples from the first chapters. Referring to the wife of a client: “I wouldn't say she was mutton dressed as lamb, but there was a definite whiff of mint sauce about Mrs Keggie.” Or commenting on a new sheriff, one who, astonishingly, was polite to defence agents: “I suspect he'd never come across an actual crime, if one discounted the price of a G & T at the New Club.”

But enough of this frivolity. Not very far into our tale, Robbie finds himself charged with murder and doing a seven day lie down to boot. It's not a spoiler alert to say that there may well be a seventh book in the series – you really don't think he did it, do you? – but the 300+ rollicking pages contain a pretty staggering cast of characters. There are the weel kent ones, such as dodgy lawyer Sammy Veitch and his drouthy cronies from the Red Corner Bar, Fiona Faye QC, and Hugh Ogilvie, Robbie-hating PF. Then there are new ones: Sheriff John Sibbald, referred to above, a Justice Secretary and his highflying fiancée, plus a couple of sinister police officers from the Specialist Crime Division.

The pace is unrelenting. I have never been so glad to see a rain soaked Saturday. I rattled through this in a day. Another McIntyre masterpiece.

A Song for the Dark Times 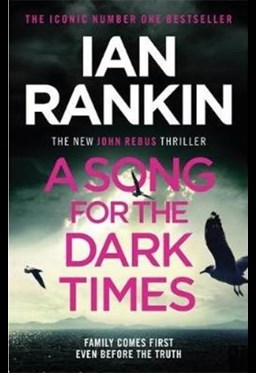 What's the first thing you notice about a book? Apart, obviously, from the title? I suspect for many it may be the cover notes. I do my very best to avoid these. At best they are fatuous irrelevancies; at worst they may be plot spoilers. (For that reason, you would also do well to refuse to read any reviews of Ian Rankin's work in the Scotsman newspaper.) So what should you make of the subtitle on the cover of this, the latest John Rebus novel – Family Comes First, Even Before The Truth?

Well, I'm not going to tell you. I am pretty certain, however, that the Brecht quotation was added later. The book was started before the Great Plague was with us, but edited during lockdown. More resonant is the second quotation on the front page, “We love making damaged people our playthings”. Is this a mantra for all novelists, or one which applies specifically to our hero John Rebus?

The book begins with Rebus moving house. Not far – to a downstairs flat in the same street. COPD (chronic obstructive pulmonary disease) has made the stairs too difficult. In the flitting, despite the best efforts of Siobhan Clarke, little has been disposed of. The books and the LPs sit in large disorganised boxes, along with stacks of notes from unsolved crimes. (Future plots, perhaps?) Siobhan's attempts to restore order are interrupted by the discovery of the body of a wealthy Saudi student in his DB11 in the Seafield area of Edinburgh. At the same time, Rebus has a rare call from his daughter Samantha, now resident in Caithness. Her partner has disappeared.

Only 300 pages to go, but quite a tale. Are the two cases interlinked? What is the role of the shady Scottish landowner, Lord Strathy? Precisely what is Rebus's old adversary Malcolm Fox doing on the homicide team? And speaking of adversaries, we have Morris “Big Ger” Cafferty spinning his intricate webs around anyone from whom he perceives the possibility of some advantage. Will he be able to tighten his grip over those in power?

After a very enjoyable Saturday afternoon when Scotland recorded a record rainfall, I know the answers to all of these questions. You may say that a reviewer ought to tell the reader something more. Well, not this one. I have been a fan of Rebus and Rankin from the outset. Like Rebus, I have aged in real time. What I can say is that not only is A Song for the Dark Times the best Rebus novel for some time, I would rate it as one of the best ever.

Liam Williams was nominated Best Newcomer at the Edinburgh Comedy Awards 2013, and Best Show the following year. This is his first novel, and a worthy read it is too, written in the form of emails, sent by Mark Rosiello to his cousin Paris, who fails to respond.

Mark has secured the job of a lifetime being paid to travel around Europe at the expense of Urb, his employer (for which read a form of Airbnb) to report on their Homes and authentic Experiences. He is permitted to take a travel buddy. He invites Paris but, after a falling out, the details of which we do not learn until later in the book, Paris does not join him. Mark writes faithfully to Paris from the cities he visits and of the experiences in which he participates.

Part travelogue with interesting digressions on the cities, their areas and hidden squares, the author also brilliantly captures the spirit of the traveller, writing poignantly of Mark's feelings, anxieties and experiences. Paris, Barcelona (La Rambla, Plaça Orwell), mindful pastry making in Foix, Toledo (no experiences on offer but a flat to sample for inclusion in the Featured List), Florence (where his old mate Dyson uses the flat for his own and Chiara from Newcastle's selfish purposes) and much more. However, Williamson also captures the social and cultural issues surrounding the increase in tourism and the effects and impact on local communities, where the young are forced out of their home cities due to the vast increase in holiday home rentals. A timely, funny yet affecting book. 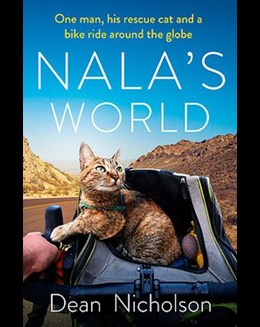 This enchanting book began as an online blog on Instagram when Dean Nicholson left his home town of Dunbar with a friend to cycle round the world. They got as far as Newcastle before their earlier habits, which in part had fuelled their enthusiasm for the trip of a lifetime, brought them to miss the ferry. The friend parted as they travelled through Europe, but Dean kept pushing on.

As he cycled up a mountainside in Bosnia, he was followed by a kitten, but which for his taking the soon to be named Nala on board, would undoubtedly have perished. Nicholson tells the tale of his and Nala's journey through Montenegro, Albania, Azerbaijan, Greece and Turkey. There is humour and pathos. Tension mounts as they cross the border into Montenegro, not knowing if the border guard would spot Nala who was unchipped and had no animal passport until Albania. This is a travelogue with a difference: the focus firmly on the relationship between man and animal, the close bond that exists between them and the power an animal has to sustain someone. A joy!

David Young brings us what he suggests will be the final Karen Müller novel. Let's hope he has a change of heart and finds a way to develop the two unfinished storylines from this and his previous book.

Müller is sent with her team to Dresden and is assigned the investigation of a murder where the deceased is found, arm outstretched, but otherwise submerged in concrete on a new Plattenbau building site. It soon becomes clear the local Stasi are one step ahead, and Müller proceeds with increased cynicism, frustration and anxiety. What is the reason for this internecine rivalry, and what impact will it have on her and her team? With verve, tension and careful plotting, we are guided towards a stunning and unexpected ending. Written with Young's fast pace and utter authenticity of time and place, this is a book to be savoured.