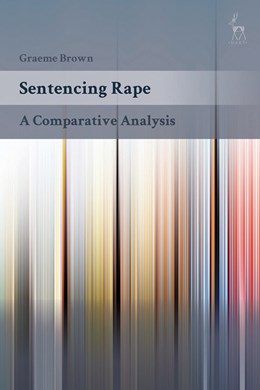 This is an important and timely book. In it, Dr Graeme Brown provides not only the comparative analysis from different English-speaking jurisdictions to which the subtitle refers but also the most detailed study which exists on contemporary sentencing practice in Scotland in relation to rape and, by extension, other sexual offences. He also offers very important material on the seriousness of rape and the victim's role in sentencing, and also on image based sexual abuse.

The Scottish Sentencing Council is, as is well known, preparing guidance on the sentencing of rape, sexual assault and offences relating to indecent images of children, and has just published a literature review. That review is explicitly limited in its scope and does not offer much critical and comparative analysis of the approach which courts take or of the effect of introducing guidance. Dr Brown has, singlehandedly, done that work and provided a most important resource for understanding and developing law and practice.

Sentencing guidelines have been most fully developed in England & Wales, and Dr Brown's chapter on the position there chronicles sentencing law and practice prior to and after the adoption of the relevant definitive guideline. That analysis is very important, because it tells us what difference having a guideline actually makes – though, of course, the nature of the guideline and the legislative framework within which it sits have an important part to play. Dr Brown notes that the effect of guidelines in England & Wales has been a move towards uniformity and consistency, with a focus on sentencing the offence rather than the offender, which makes constructive, remedial disposals unlikely.

He makes the important point that, in England & Wales, rape is regarded as the paradigm sexual offence and it sets the baseline for the approach to sentencing for all other sexual offences. One might reasonably expect to see something similar in Scotland. It is arguable that s 1 of the Sexual Offences (Scotland) Act 2009, which deals with rape, sets the pattern which is followed by the remainder of the offences in the Act, so that rape is treated as the paradigm sexual offence in Scotland, too.

Dr Brown's knowledge of the law, the practice and the cases on sentencing in Scotland is, arguably, second to none and his chapter on Scots law is a masterly and comprehensive examination of the subject. It ought to be compulsory reading for anyone with any part to play in the process. One important observation which he makes is that there is a contrast between the Scottish approach of having regard to guidelines, and the English approach which is that they are binding. He recalls that, in Graham v HM Advocate 2019 JC 26, the Appeal Court in Scotland stressed that sentencing guidelines should provide a structure for judicial discretion but do not remove it. Of course it remains to be seen, once we have a guideline, how much room remains for discretion in practice. Almost by definition, a guideline will set boundaries. As Dr Brown writes, “It is an unavoidable consequence of any attempt to structure sentencing discretion that it must necessarily involve circumscribing the powers of the sentencing judge, yet the exercise of judicial discretion is crucial if justice is to be done in the individual case”.

It is relatively easy, and relatively common, to look south of the border for comparative material. The fact that he looks elsewhere in the English speaking world is a strength of Dr Brown's work. Space does not permit detailed comment on his chapters on Ireland, New Zealand and South Africa, but those chapters will repay study, even if only to underline the (fairly obvious) point that there is a range of perfectly respectable approaches to the way in which rape sentencing is handled. The use by Ireland of proportionality as the primary distributive principle of sentencing is an interesting study, especially because it parallels the approach of the English guidelines in its references to harmfulness and culpability without adopting the algorithmic approach of the English guidelines. And the two step approach to sentencing articulated by the Irish courts and also those of New Zealand is a valuable framework. It begins by considering where the particular case lies in the range of penalties appropriate for the offence and then moves on to consider factors personal to the offender. Dr Brown tells us that the South African courts have added to this the interests of society. He devotes particular attention to the guidelines set out by the New Zealand Court of Appeal in R v AM [2010] 2 NZLR 750, which (although they have been criticised) attempt to achieve “reasonable regularity” in sentencing.

The comparative study is the main focus of Dr Brown's book, but there are two other aspects which deserves to be recognised and applauded. The first is his summary of research on the realities and psychological effects of rape and his correction of the myth that acquaintance rape is somehow less serious than stranger rape. Granted that any rape is traumatic, acquaintance rape can be particularly so because it involves abuse of trust and may cause the victim to lose confidence in their judgment about who can be trusted. The second aspect is the notice which Dr Brown takes of, and the respect which he accords to, literature on his subject which is written from a feminist perspective.

Drawing all of his material together, Dr Brown suggests that there is a need for appellate courts to take account of emerging evidence about the nature of rape and of evolving social attitudes to the offence. He offers the approach taken by the New Zealand Court of Appeal in R v AM as the most effective way of ensuring that those who commit rape “receive sentences proportionate to the gravity of… an offence that amounts to a gross attack on the victim's human dignity, sexual autonomy and bodily integrity”.