Property: EWS1: another hurdle for the lawyer

Since the Grenfell Tower tragedy the EWS1 form has emerged as a potential issue in the purchase and sale of a flat in a tall block. But what does it involve? The authors share a recent experience
14th June 2021 | Craig Brown, Iain Sim

The authors recently were involved in a conveyancing transaction which at the outset seemed straightforward, but which quickly was complicated by the uncertainty that surrounds EWS1 forms.

They have prepared this note to help practitioners better understand the purpose of EWS1, the applicability of the EWS1 guidance, the logistics of instructing EWS1 surveys, lender issues, and client care considerations.

Following the Grenfell Tower tragedy, the UK Government issued guidance for the EWS of residential buildings that stand 18m and higher. The guidance put in place a process whereby suitably qualified persons assess a building’s EWS and then issue a so-called EWS1 form.

The systems that are of particular concern are aluminium wall cladding systems, as these are now known to be especially combustible.

The client had instructed that an offer be made on an investment property, on the south bank of the River Clyde.

The building is a stepped design; the outer flats occupy part of the building that is four storeys (below 18m), while the inner flats extend to eight storeys (above 18m). The building is of double brick construction, with cavity wall insulation.

At the point the offer for the property was issued, the client also was in advanced discussions with a major lender in respect of a mortgage product.

The seller’s home report contained a statement that an EWS1 form would not be required, as the property has no visible cladding. The lender then instructed a valuation survey, which seemed to confirm that position. It stated: “The external wall system, including any cladding and any attachments (if applicable) for the subject block are understood to have been subject to a review. It is understood that an acceptable statement confirming compliance with MHCLG guidance/EWS1 form exists for the subject block following review by a suitably qualified independent professional advisor with the level of expertise described in the notes on the EWS1 form”.

In spite of this, the lender adopted the position that an EWS1 form would be required. In response, the relevant section of the home report (together with an explanatory note from the surveyor) was sent to the lender. The lender in turn sought clarification from the valuation surveyor, who reverted: “The statement is felt applicable. It is the external wall system requiring assessment including any balconies/attachments.”

While this statement was perhaps somewhat Delphic, the lender nonetheless took it as confirmation of its position. The client appealed to the lender’s specialist EWS1 team, unsuccessfully.

The client had become caught between opposing viewpoints as regards the applicability of EWS1.

The EWS guidance applies to residential properties above 18m (such as blocks of flats), whether privately owned or held by housing associations.

The guidance extends to student accommodation, care homes and houses in multiple occupation (HMOs), but, curiously, does not apply to short-term accommodation such as hotels. Practitioners should note that this guidance is not law, albeit it seemed to the authors that at times this was lost on some of the stakeholders!

If that were not confusing enough, the surveyor who prepared this subsequent valuation was drawn from the same online firm of chartered surveyors that had prepared the first!

As noted, the EWS process envisages a “suitably qualified person” conducting a fire-risk assessment of a building’s external wall system, before issuing an EWS1 form.

The guidance is silent as to what constitutes a “suitably qualified person”. Yet again, there is evidence that lenders are adopting different approaches. Accordingly, before a client incurs a substantial outlay (more on that anon), it would be prudent to confirm that a lender will accept an EWS1 from the client’s surveyor.

On 8 March the RICS published fresh guidance for surveyors, which details the criteria that should be used to help decide whether a particular building requires an EWS1 form. These include its height, the type of cladding, and (in some circumstances) how much of it there is on the building. There are also criteria pertaining to balconies and combustible materials.

While practitioners will doubtless welcome this development, it does not as yet appear to be helping to deliver a uniformity of approach (as illustrated by the diverging views of two surveyors and two lenders).

Perhaps unsurprisingly, the seller’s solicitor took the view that the buyer should meet the cost of any EWS1 survey that might be required by a lender.

Practitioners should treat this as a commercial negotiation point, however. How badly does a client want to buy a property? Is a seller going to walk away from a willing buyer with funding structured pending the issue of an EWS1 form? It is certainly always worth trying to push back on the seller, or to seek an agreement to split the cost.

It is important (as already noted) that practitioners should instruct a surveyor from whom a lender will accept a signed EWS1 form, and that surveyor’s indemnity should be checked.

In Scotland there are only a few firms that can undertake EWS1 surveys. This has led to two unfortunate consequences, namely long lead times for the surveys (in this case almost two weeks), and high costs.

On the former point, practitioners should issue instructions as early as possible. On the latter, clients should expect to pay anything between £800 and £5,000 for the survey and the issuing of the form.

Once issued, an EWS1 form lasts for five years, after which it must be renewed.

Practitioners also should be mindful about who an EWS1 form protects. Unlike certificates of insurance, where several interests can be noted on the same policy, with EWS1 a separate form requires to be issued for each interested party.

In order for a lender to be able to rely on the surveyor’s indemnity, they will insist that a form be issued in their name. However, for a client to have a similar protection for their deposit, a second form will be required. With that comes an additional charge, usually 50% of the cost of the first certificate.

In any conveyancing transaction both client and practitioner require to keep a number of plates spinning.

On the practitioner’s side, in addition to the standard tasks of negotiating missives, examining title and drafting deeds, there are also anti-money laundering regulations to comply with. On the client’s side there are the mechanics of the move to arrange, the financing of the transaction, the transfer of utilities and the arranging of insurances. In addition they require to instruct a solicitor and deal with their queries and requests. Time is short on both sides.

The requirement to obtain an EWS1 form in satisfactory terms, when the guidance on what constitutes “satisfactory” is far from clear, adds a complicating factor to transactions that can often already be overcrowded with complications.

The added workload and responsibility with EWS1 brings increased cost and the question of who is to meet that cost. Setting aside who should pay for the surveyor’s time which, as seen, is considerable and a point for negotiation between purchaser and seller, there is the cost of time spent liaising with mortgage lenders, facilitating access for inspection and engaging surveyors who, in a busy property market, have limited availability.

With the vast majority of conveyancing work invoiced on a fixed fee basis, a practitioner will either see their already reduced profit margin wiped out entirely or the cost will be passed on to the client. This may be a cost to the client’s time as they shoulder the responsibility for arranging the survey, or a monetary cost if done by their solicitor, who will almost certainly view this as an additional service worthy of extra charge.

The end result? Frustration and annoyance at the additional time and expense, and the probability of delay in completing transactions.

Looking forward, reform is on the horizon and perhaps, in time, legislation will follow. Rather than EWS1 forms being carried out on a flat-by-flat basis, one form will soon cover all flats situated in one building. This should lower overall cost and may also see factors and property managers shoulder the responsibility for maintaining a valid EWS1 form for an entire block.

Lenders and property owners have an interest in the process being streamlined but also carried out responsibly. From a lending perspective, banks and mortgage lenders must have an assurance that they are receiving proper security in exchange for their loan and that the asset they are investing in has a positive valuation. Flatted dwellings with combustible cladding systems will routinely receive a nil valuation for mortgage lending purposes. Clients not only require their investment to have a positive value but require this to be safe for themselves, their families and their tenants. There is therefore little doubt that the EWS1 process plays an important role; in its present format it just requires considerable tweaking.

While that tweaking is awaited, legal professionals must adapt, as they do. If stress is to be minimised (for both practitioner and client), early identification of the issue is essential. This begins with a pre-offer examination of the home report, and offer clauses that put a seller on notice at the earliest juncture that an EWS1 will likely be required. Thereafter, when mortgage instructions are received, it is critical that early engagement with a lender takes place to ensure their requirements are clarified and satisfied.

With any conveyance, a satisfactory outcome relies on all stakeholders playing their part and responding diligently. In the past this may have relied simply on purchasing and selling solicitors getting on with things; however, the addition of further professionals into the mix means the team is only as strong as its weakest link. This leaves the EWS1, in its present guise, a source of considerable friction which has the potential to leave the practitioner’s relationship with their client as combustible as the cladding may be. Thankfully, in the case of the authors’ transaction that was not the case. 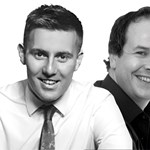