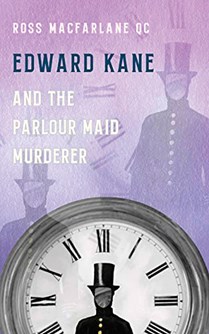 Less, they say, is more; the best things come in small parcels, and so on. Readers of The Scotsman newspaper have previously made the acquaintance of the innocent abroad that is Edward Kane, advocate. Twice, in fact, in two serialised short stories, appearing at Christmas time in the past couple of years. This, I believe, is his first appearance in a full length novel. How will he fare?

But first, some introductions. Our Edward is a penurious young advocate, his wig definitely pristine white. He lives in modest accommodation with his manservant Mr Horse. A Cockney Waterloo veteran, Horse is everything that Kane is not, worldly wise and with a roving eye. Fortunately for Kane, the other eye is constantly on the lookout for his employer's wellbeing. Visitors to Parliament House today will recognise Mr Macfarlane's descriptions of it in 1850. Some of the ways it has remained unchanged over a couple of centuries are striking, not to say a little worrying.

PH insiders might also recognise some of the characters, or at least their stereotypes. Kane is mentored by a slightly older friend, Collins. He is given streetwise advice from an older advocate, N P “Not Proven” Norval. The Edinburgh upper classes and nobility are not flatteringly portrayed in any of Macfarlane's work: it is no different here. We have Sir Charles Irving and eminent surgeon Sir John Forbes-Knight. The latter is Kane's potential father in law; he and Irving seem permanently embroiled in a series of trivial but litigious disputes.

The complications begin when the Dean of Faculty orders Kane to take on the defence of a man suspected of the murder of the titular parlour maid, a murder which took place in the Irving residence. Now, our Edward has never even witnessed a murder trial, let alone conducted one, so all may not be as it seems.

And that is as much of the plot as I'm prepared to reveal. The scene is set with the account of the public execution, in front of a huge crowd, of a notorious criminal. (Don't be so appalled – this was before the days of Eastenders. What other fun did people have to look forward to?) We have the huge public interest in a high profile murder. We witness a very practical demonstration in a surgery lecture and, courtesy of Mr Horse, we see the inside of some Edinburgh taverns of ill repute. Finally, we are reminded of the old adage about the course of true love.

To answer my earlier question, fear not that this full novel might turn out to be a watered down version of the originals. This is a rollicking good tale, which will bring many a smile. Don't think that you'll guess everything as you go – there are a good few twists and turns. We are reminded that when instructing counsel in the 1850s it was customary to present compliments. (They were still doing it when I was an apprentice in the 1970s.) Compliments are heartily due to Mr Macfarlane for producing such an enjoyable book.

Pursuing the Stasi into the Present

The author ended his career with the FBI as head of operations in 11 African states, preceded by his posting as Deputy Head of the FBI office in the Baltic states. Here he writes about the Stasi, the Ministry for State Security (MfS) of the Former German Democratic Republic, headed by Erich Mielke and based on the early incarnation of the KGB, the Chekists.

The book gives a good general overview of the Stasi and its role in maintaining security within the GDR. The author then considers where some of the 91,000 former Stasi officers found themselves on their employment being terminated when the successor organisation to the MfS was disbanded in 1990. These interesting and well researched chapters shed light on how some of those individuals have turned their previous skills in repressing a population to new opportunities in business.

To an extent, as an investigator, he “follows the money”: untold party and state funds which were not recovered and forfeited on the dissolution of the East German state, and the governing party, the SED. He describes the efforts made by the German authorities to understand those state structures and attempts to uncover the companies which were funded by that money. We learn about the role of Lieutenant Colonel Alexander Schalck-Golodkowski, who in retirement lived in Bavaria, found himself the subject of numerous investigations and prosecutions but who had been responsible for securing hard currency for the GDR through the sale of stolen art, the surrender of East German citizens to the West at a price, and the sale of East German nationals' blood to the West.

There is much on the organisations of former Stasi officers who seek to enforce their rights, improve their pensions and who actively seek to promote a revisionist view of the role of the Stasi, including their not infrequent presence and disruptive behaviour at the former prison in Berlin, the memorial prison Gedenkstätte Berlin-Hohenschönhausen. The adverse role of the Stasi in the public domain and conscience is well documented.

There is little doubt that the former Stasi officers remain active, some turning their skills to new legitimate employment, others seeking to highlight the benefits of the former socialist state. There are those (and not all elderly) who have said that although while living in the GDR they had less freedom than their western countrymen, there was little crime, a free healthcare system and guaranteed employment. There was a degree of contentment. There is surprisingly little English language non-fiction on the Stasi. This book is a welcome introduction to what is a fascinating period of Cold War history.