The members of Falkirk & District Faculty of Solicitors were saddened at the passing of the late Sheriff Albert Vincent Sheehan. Having “floated” at Falkirk from 1981, Sheriff Sheehan was given a permanent position in 1984, and was to remain there for the next 21 years.

Not a huge fan of civil proceedings, and operating on the basis that no civil action was incapable of extrajudicial settlement, Sheriff Sheehan was in his element when it came to crime. The early 1980s were, of course, the era of the short sharp shock, a failed Government policy that seemed to linger longer around Falkirk than many other jurisdictions – for throughout his lengthy shrieval career Sheriff Sheehan was never one, as they say, to miss and hit the wall when it came to sentencing. The mere rumour that “Albert” would be presiding at the means inquiry court was enough to clear the building faster than a fire alarm. But for all his rigorous sentencing practices, as another sheriff once said of him, “Bert does seem to have the knack of sifting out the bad from the mad and the sad. You just don’t want to be bad.”

Of course, Sheriff Sheehan’s addition to the Stair Memorial Encyclopaedia bears testimony to his extensive knowledge of criminal law and procedure, and to appear before him on even the most routine matter one had to come prepared for interrogation. Full of mischievous interventions and raised eyebrows, especially during pleas in mitigation, he kept defence solicitors on their toes; nonetheless, was invariably polite and in his dealings with young and inexperienced solicitors always understanding.

The feature that most appealed to the local criminal bar, though, was Sheriff Sheehan’s fairness when it came to a trial, where rightly the presumption of innocence and the rule of law were always paramount. Although sometimes prone to assisting the Crown (“I’m sorry, Madam Fiscal, before you sit down, I think I must have missed the witness identifying the accused; could you confirm for my notes please?”), he actually believed in a thing called corroboration, was minded now and again to disbelieve police officers, and was encumbered by more reasonable doubts than many of his shrieval brothers and sisters.

Take the case where a random search by the police found the accused in possession of stolen property. The procurator fiscal depute defended the search, saying there was nothing unfair about it. “Is that so?” queried Sheriff Sheehan. “Then, perhaps you can explain what was fair about it.” When the PF couldn’t, he acquitted. 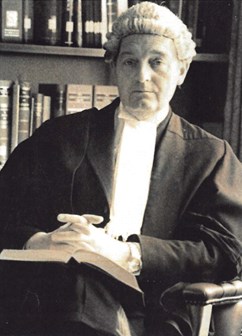 But if there was one group who could rely on a degree of benevolence from the bench it was army veterans. Having served militarily himself, any old soldier who wound up in the dock was always entitled to the benefit of a reasonable, or, on occasion, an unreasonable doubt. The stories of the sheriff’s dealings with ex-army personnel are legendary. Like the day he ordered a policeman to pass his hat around the court in an impromptu whipround for an ex-sailor who’d served aboard HMS Amethyst during the Yangtze Incident, only to find himself many years later penniless and in the dock following what the procurator fiscal libelled as a drunken breach of the peace in a local bar, but which Sheriff Sheehan recategorised as “an unfortunate misunderstanding with the publican”.

Then there was the time in the late 1990s when a small elderly gent appeared charged with driving without a licence or insurance, saying that he hadn’t applied for either since being demobbed in 1945. Further inquiry revealed that he had served in the 3rd Battalion of the Scots Guards and on D-Day, as a tank driver, had taken part in Operation Bluecoat, the most concentrated infantry tank action of World War 2. “Well now,” said Sheriff Sheehan, with a cock of the infamous eyebrow. “Fifty years and you haven’t applied for a licence yet? It’s not like a Scots Guard to be forgetful. Whatever, you’re admonished.” Despite a complete lack of mitigation to support it, he went on to make a finding that there were “special reasons” why neither a disqualification nor even the imposition of the minimum number of penalty points was merited in the circumstances.

Though he left Falkirk to retire in 2005, Sheriff Sheehan is fondly remembered by all at the court as a sheriff who took a real interest in his community and the administration of justice locally, and as the fairest of judges who, notwithstanding the neverending political meddling in the criminal justice system, remained very much his own man.