It has been a quieter period in the Appeal Courts, but with the new session of the Scottish Parliament underway criminal lawyers would do well to look at some of the consultation documents which have appeared.

The Bail and Release from Custody consultation opened on 15 November, and closes on 7 February 2022. It is to be hoped that after this further hiatus, electronic monitoring of certain bail orders can be implemented swiftly, as the present curfew arrangements are a waste of police time, other than a source for submitting problematic reports. If accused are out and about in breach of bail, or worse still committing new offences, that is one thing, but otherwise, the curfew system does not protect complainers and witnesses.

Back in the day, I seem to recall very few discretionary life sentences being imposed, especially when, as a young prosecutor, I saw some very nasty regular High Court offenders being given determinate sentences for yet another rape or serious assault.

A life sentence for 11 rapes was imposed in 1982 on the subsequently notorious Angus Sinclair, later convicted of the murder of Mary Gallagher in Springburn in 1978 and much later for his part in the World’s End murders of Helen Scott and Christine Eadie in 1977.

I was present in court in 1990 when Lord Ross imposed a life sentence on Robert Black for the abduction of a young girl he seized at Stow, but fortunately was more or less caught in the act. The report described him as being very dangerous. Subsequently, he was convicted of the abduction, rape and murder of Susan Maxwell, Caroline Hogg and Sarah Harper which were committed in 1982, 1983 and 1986 respectively, and he was convicted later of the sexual assault and murder of Jennifer Cardy which took place in 1981.

Since 2006, under the oversight of the Risk Management Authority, it has been competent for a High Court judge to impose an order for lifelong restriction (“OLR”) on accused convicted of serious sexual or violent offences whose liberty presents a risk to the public at large. This replaced the discretionary life sentence.

An OLR is not imposed for the crime committed but for the risk that the individual is assessed to present to the public. It is imposed following conviction, after the preparation of a detailed risk assessment report (“RAR”) ordered by a High Court judge.

Back at Journal, April 2014, 24 I looked at the case of Ferguson v HM Advocate [2014] HCJAC 19, where the point was made that out of 100 OLRs to date, even with those where the determinate sentence was very short, few had achieved release on parole. There was criticism that most requests for an RAR ended up in an OLR, but the recent figures do not support that.

However an OLR truly is a lifelong sentence, meaning that all individuals sentenced to an OLR will be the subject of a risk management plan (“RMP”) for the rest of their life, in the same way that convicted murderers released on parole are liable to recall at a later date if their conduct gives rise for concern, not necessarily triggered by a later conviction.

There have been more than 200 OLRs made in the last 15 years. In the years 2008-09 and 2013-14 around 30 OLRs were imposed; numbers dropped back to less than half that figure, but in 2019-20 there was an increase in reports instructed and orders made. The main point to note is the cumulative figure of those remaining in custody, which is steadily rising.

In AB v HM Advocate [2021] HCJAC 43 (8 October 2021), an appeal was taken in respect of the imposition of an OLR following the appellant’s conviction on 11 charges which included serious common law assaults, abduction, threatening and abusive behaviour and stalking. The assaults were aggravated in that they involved abuse of two complainers – the appellant’s partner and his ex-partner – over prolonged periods from 2012 to 2015 and 2017 to 2019.

There was a difference between the risk assessments produced by two experts, but the sentencing judge preferred the opinion of the expert who assessed the appellant as being of high risk. As is often the case, the appellant had a troubled background, and while the note of appeal suggested the appellant was not an “exceptional offender”, the test as the High Court made clear is found in s 210E of the Criminal Procedure (Scotland) Act 1995. That is: “the risk criteria are that the nature of, or the circumstances of the commission of, the offence of which the convicted person has been found guilty either in themselves or as part of a pattern of behaviour are such as to demonstrate that there is a likelihood that he, if at liberty, will seriously endanger the lives, or physical or psychological wellbeing, of members of the public at large”.

HM Advocate v McCarthy [2021] HCJAC 46 (26 October 2021) was a successful Crown appeal after the respondent was sentenced to a total of five years’ imprisonment for the attempted rape of a male, sexual assault of a second, 17-year-old, male, and taking indecent photographs of him and the possession and distribution of such photographs. The evidence of the assaults was gruesome and degrading. The respondent had a significant list of convictions. He had a drug problem and refused to co-operate with the preparation of a social work background report.

It was conceded that the sentence was lenient, though not that it was unduly lenient; but the Appeal Court thought otherwise and indicated that no accused can prevent the court from imposing an appropriate sentence by non-cooperation and a report should still be prepared. There was material available in an older risk assessment. The original sentence was quashed and a 10 year sentence substituted, being seven years in custody and an extended sentence of a further three years.

What goes on in the background leading up to the sheriff granting a petition warrant is not always totally clear to the profession at large, and while the bill of suspension case, Docherty v HM Advocate [2021] HCJAC 45 (19 October 2021), sheds some light on this important but obscure area of procedure, it leaves a lot unsaid.

Prior to the commencement of the Human Rights Act 1998, the prosecutor was taken on trust that if they sought a petition warrant from the sheriff that appeared competent, the sheriff would grant it. This contrasts with the position when a search warrant is sought, where the decision to grant warrant is based on the receipt of information believed to be truthful which provides reasonable and proportionate grounds for taking this step.

In light of that Act, where warrants are sought in ordinary course to institute summary proceedings by seeking an arrest, some information is provided with the request which usually arrives in a transit envelope; reasons include that the accused could not be traced despite repeated efforts, is of no fixed abode, is presently on bail, police are seeking fingerprints etc.

So far as requests for petition warrants are concerned, generally the severity of the charge is such that a warrant will be granted, although the sheriff can insist on being addressed on the reasons why. Recently, a warrant was sought for a notorious criminal who is still in prison, alleging events occurring many years ago. The fiscal clearly expected that the sheriff needed to be addressed and satisfied that the allegations had come to light recently, and in any event the accused could be “ordered in” from prison. The warrant was granted a few minutes before the accused made his appearance in court.

In Docherty’s case he was charged in December 2020 with assault to severe injury and released by police on an undertaking to appear a fortnight after the alleged event. The undertaking was cancelled by the fiscal, but in July 2021 a petition warrant was sought and granted by the sheriff. The accused was arrested on a Saturday in August and appeared in court the following Monday when he was released on bail.

The High Court was quite rightly critical of the fact that the sheriff had not been properly advised of the background. A petition warrant is required to initiate proceedings and the crave indicates that if necessary the accused will be arrested, but it is left to the fiscal how to enforce the warrant.

The High Court refused to pass the bill, since there were no craves to support an argument about article 5 ECHR. The action of the fiscal in ordering the arrest of the accused was unnecessary, but did not invalidate proceedings in the matter.

One remedy if conviction follows would be that the two days spent in custody should be taken into account in sentence. I have often thought an accused should not just be entitled for the days in custody in a “seven day lie down” from committal for further examination to full committal, but the time spent from date of arrest which might run to two or three days. 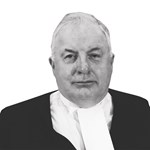