A matter of opinion

A recently called advocate relates the journey that took him to the bar after 20 years as a solicitor, and what intrants can expect before and during devilling
19th October 2020 | Jon Kiddie

As a 17 year old, I first met the late, great, and sadly missed David Lessels (1949-2018) at a law school information day. I brashly declared I would become an advocate. He smiled wryly.

Fast forward several penniless years to my traineeship. At last I was earning. Two years later, I even had some modest savings. As I moved firms, I remembered my goal. I sent for Faculty’s application form. The day it arrived, it was snowing. I pondered. By now, I had a girlfriend. We wanted to buy a house. I reflected on my penniless years of pasta and condensed soup, and long nights in the law library. Feeling glad for my fire, I put the form in a drawer.

Spouse and house, salary that pays the mortgage, then, before you know it, scampering little feet and children’s laughter. And I enjoyed being a solicitor, it has to be said: meeting clients, hearing their woes, and helping to overcome them. I enjoyed the occasional thank you note, perhaps with bottle of wine, for changing someone’s life for the better.

Life goes on. You’re closer to 45 than 17, approaching midway in your career. It was winter again. I reached for the phone. The woman at the other end wasn’t sure there was enough time. Matriculating with Faculty required public notice, at least 21 days before 31 December. Today was the last competent day to display mine. And, she needed it by close of business… with a wet signature. It was after lunch, and I was in Bearsden.

I hoped it wouldn’t take an eon to park near Parliament House. Luckily, in the Grassmarket, another car pulled out of a space. I abandoned mine and hurried up towards High Street. I got there on time. Just.

David Lessels passed away on 28 December 2018. My notice was on display outside Parliament House until 31st. I had matriculated.

I felt as though I had just taken my first step into a larger world.

Not everyone does it my way. An aspiring advocate may undertake a bar traineeship. This is designed to dovetail into Faculty’s own training programme. My year of call was very large: 26 devils from diverse backgrounds, civil and criminal, east and west coast. Most had some years’ experience as a solicitor. A few even had more than my 20. Some had little or none. Yet, each was there on the basis that it was right for them to embark on the journey at that time.

Although devilling itself lasts nine months, the entire timeframe encompasses some 21 months, from date of applying to matriculate, which Faculty recommends be done by mid-October in year 0, until date of call, usually the end of June in year +2. Betwixt these dates, there’s a fair amount of “downtime” during which an intrant may continue to work as a solicitor and/or self-study for the bar exams, or await results.

Once matriculated, an intrant may put off the exams (sometimes for years). However, they must usually pass in the same year as devilling commences.

Exams are held in February of year +1. Two are mandatory: Practice & Procedure; and Evidence. These require considerable self-study. Each sounds out your knowledge, civil and criminal, particularly (but not exclusively) as relates to the Court of Session and High Court. Candidates may have considerable solicitor experience but not in both procedures, or no experience of our supreme courts. Faculty issues past papers. Familiarisation with the types of questions asked is advisable.

Held at the weekend (for reasons obvious to employed solicitors), each exam takes two hours. Both are on the same day (with an hour between for reflection in St Giles). I had to write by hand. This can be tough for someone unaccustomed to pen and paper after half a lifetime of IT. In cases of medical condition or injury, I understand Faculty may permit a laptop. Candidates may also use Greens Annotated Rules of the Court of Session and Sheriff Court, and other statutes (unannotated), including the Criminal Procedure Act 1995.

Given the exams’ challenging nature, failure on first sitting should not necessarily be taken as a cue to abandon the idea. There is a resit diet.

Candidates who have not yet passed certain other LLB subjects essential only for the bar, e.g. Roman law and private international law, also require to pass these before devilling. This can be through Faculty, or as an external university student.

Assuming exam success, there follows a fairly lengthy wait before devilling commences in early October of year +1. If an intrant wishes to defer devilling, again I understand Faculty may permit this.

The current Director of Education leads the tuition. His passion, commitment and indefatigability for legal education are obvious. I’m sure he’ll leave an indelible mark on the minds of an entire generation of counsel.

The method is “tell, show, do”. There are numerous exercises in written and oral advocacy, including videorecording. For each, Faculty lays on detailed and extremely helpful one-on-one feedback courtesy of an existing advocate.

Each devil requires a principal DM, being a senior junior (7+ years post-call) with a mainly civil practice, and allowed one devil per training year. Choose your principal DM with care. Faculty provides a list. You will spend a lot of time with this individual, working alongside them, dining, travelling, and even overnight stays. I recommend asking around, making inquiries, and meeting your prospective DM beforehand.

You also require a criminal DM to shadow for four weeks (in a block or segments). They may have several devils per training year, so you might need to co-ordinate with classmates. Subsidiary DMs may be useful where you have an interest in an area that your principal DM doesn’t undertake.

The bar has a strong sense of collegiality, or as I prefer to think of it, fellowship. This might appear surprising in a profession where everyone is self-employed and in direct economic competition with everyone else. However, Scotland’s bar is small: considerably smaller, overall and per head of citizenry, than the English & Welsh. Thus, it’s crucial for counsel to maintain amicable relations among colleagues who might become opponents time and again.

The value of fellowship became clear in my training: the number of devils required all hands on deck from members of Faculty for one-on-one feedback. It was also evident in the large number of excellent talks given by bar and bench alike.

I undertook solicitor advocate training a few years before. That was very useful. It made me a better lawyer, and probably made it easier for me to transition to advocate. However, a solicitor advocate is still a solicitor, and that training is more in the nature of an advanced practitioner’s course. By contrast, advocate training essentially deconstructs then reconstructs you as a different type of lawyer altogether. Of course, in our still split profession, it is natural and necessary that formation and approach have their own particular character.

Solicitor advocate training costs roughly £3,300 (excluding travel and occasional overnights). Most of this consists of the training fee. There is no training fee per se at Faculty. However, there are numerous incidental costs, including books, IT, and of course the traditional attire. Conservatively, I would put the cost at about £5,000-£6,000, minimum. Also, most solicitor advocate training takes place at weekends, while candidates continue to practise. By contrast, devils must give up legal practice. Therefore, it’s almost inevitable that devils set aside nine months with little or no income, while having to meet living costs.

Undoubtedly, going to the bar remains the more costly option. This raises the question of when is best to undertake the adventure. Some approaching the end of university might decide that, after years of undergraduate impecuniosity, what’s another 21 months? Others might prefer to gain some practical experience, and build up a nest egg.

In retrospect, I’m glad I didn’t go straight to the bar. However, it’s very much a personal choice. When I undertook solicitor advocate training, then went to the bar a few years later, I felt as though I was arriving with some wisdom – comforting when many classmates are conspicuously younger and bristling with natural smarts.

The bar is much more diverse these days. True, it still has some way to go, as it knows. To this end, scholarships are available. That said, qualifying as an advocate in Scotland is much more accessible than qualifying as a barrister south of the border.

Ultimately, whether someone goes to the bar at all, and if so, when, depends very much on personal aspirations and circumstances. If you possess that zeal, however, and a reasonably sound head; if you’re willing to put in enough hours of study, and to squirrel away sufficient savings, then it’s an experience that has much to offer. Whatever its outcome for you, it’ll change the way you look at the law and think about it… forever.

For the bar exams, the most up-to-date versions of Greens Annotated Rules of the Court of Session, Sheriff Court Rules and Criminal Procedure Act 1995 are indispensable (plus an unannotated version of the Act). When I studied, Hennessy’s Civil Procedure & Practice (5th ed) and Raitt on Evidence (3rd ed) had just been published, both excellent resources. I suggest supplementing such textbooks, e.g. by reference to Court of Session Practice, as edited by the Lord President and others. Criminal is trickier for those lacking practical experience. The principal text, Renton & Brown, is extremely pricy. However, the annotations to the 1995 Act provide a decent framework for further reading.

Before committing to book study, I strongly suggest familiarising yourself with past papers to identify areas in your knowledge that need updating, or where you draw a complete blank.

Besides a new laptop, probably your wig will be your single most expensive purchase. Legal outfitters sell these for around £500, or you may find one second hand – check its quality and fit. Don’t necessarily buy the rest of the gear from legal outfitters. Many other retailers sell the traditional evening tailcoat and stripy morning trousers, some at extremely competitive prices (especially online). And, if you register for VAT pre-call, you may be able to reclaim one sixth as a business setup expense. 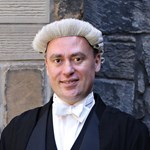 Jon Kiddie is an advocate with Terra Firma Chambers