Crime at an uncertain time

Although solemn trials are restarting, all in the justice sector must work together to counter the significant harm already caused by lengthy delays in hearing cases, Victim Support Scotland warns
19th October 2020 | Kate Wallace

No sector in Scotland is left untouched by the adverse impact of COVID-19. The ripple effects of the pandemic can be seen in every aspect of our lives.

Scotland’s criminal justice sector is no exception. It has had to adapt to attempt the restart of court business and, with the strain it is under, it is teetering on the brink of collapse.

According to a recent report by HM Inspectorate of Prosecution in Scotland, by August 2020 the backlog of High Court and sheriff and jury solemn cases was 750 and 1,800 respectively, and 26,000 for summary cases.

Despite the restarting of High Court trials, the buildup of court cases continues to grow, and even when business returns to normal levels, the backlog will remain almost untouched. According to the Scottish Parliament’s Justice Committee, it could be up to a decade until it returns to “normal”.

The real life and human impact of such delays to victims, witnesses and accused awaiting trial should not be underestimated. It is both devastating and disruptive.

Earlier this year, our support team recorded a staggering 400% increase in the number of safeguarding reports where our teams took action due to concerns about victims and witnesses describing suicidal thoughts. This statistic alone should present a stark reminder for those in the criminal justice sector as to just how vulnerable some of Scotland’s victims and witnesses are.

It is not just victims that are impacted: people accused of crime are also being left in limbo, with delays compounding an already difficult situation for them and their support network.

It is an unfortunate reality that many of Scotland’s most vulnerable victims find themselves in financial destitution. We hear numerous accounts of people living with their partners under coercive control.

Looking cumulatively across April to August 2020, the number of domestic abuse incidents was 8% higher than the equivalent period in 2019, according to a report from the Justice Analytics team at the Scottish Government.

The pandemic has only exacerbated the harsh reality for many living in these situations. It is no surprise therefore that the £100,000 funding that Victim Support Scotland has received from the Scottish Government towards the Victims’ Fund has already dried up. During the outbreak, many victims have received urgent financial assistance towards, for example, food vouchers, access to mobiles and laptops, rent for those escaping domestic abuse situations, and funeral costs for bereaved families.

Through our Support for Families Bereaved by Crime service, we provided financial aid to a family who had entered into an exploitative media agreement. The family had sold their story into one media outlet, but did not fully understand the exclusive agreement in place. The media outlet breached the contract as they did not provide the family with payment, or prior notice about subsequent media coverage, and photographs appeared without consent. The money was used to pay for legal support enabling them to come out of the contract. Victim Support Scotland is committed to increasing the amount it invests into the Victims’ Fund so that we can reach more victims at a time when they need us the most.

Following a recommendation from Lady Dorrian’s Restarting Solemn Trials Working Group, we see the first High Court trials using remote juries taking place in Odeon cinemas in Edinburgh and Glasgow this month; and the Scottish Courts & Tribunals Service recently announced that remote jury centres are to be extended across Scotland.

Worryingly, there are still only a limited number of trials going ahead. For many victims, their families, and also the accused, significant damage has already been done.

The justice and legal sectors need to work together at this time to prioritise reinvigorating Scotland’s justice system and getting trials going again. Otherwise, we risk seeing the predicted catastrophic impact of delays for years to come.

Domestic abuse cases are usually prioritised within the criminal justice system. However, we fully expect a high number of adjournments and an increase in cases being postponed until spring of next year. This is hugely concerning when it comes to safeguarding these victims.

Victim Support Scotland believes the impact of crime on any individual victim is often more significant than the type of crime that has been committed. The criminal justice system must not lose sight of this, if it is to serve victims properly in the future.

Recent developments about restarting trials are encouraging, but this is just one small step on a long road ahead. Everyone involved in the justice system – from legal to support services – has a role to play in making sure we do all we can to get trials progressing. 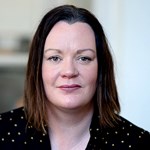