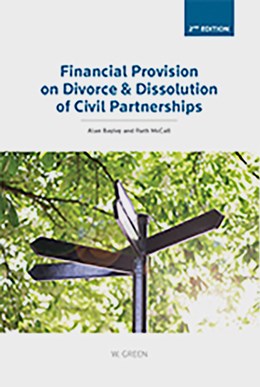 Financial Provision on Divorce and Dissolution of Civil Partnerships states on its cover that it is written by lawyers for lawyers, and this description could not be more accurate.

Each chapter is then broken down into a general discussion, then the specifics of each sub-section of the Act together with case law and practical tips.

The book and its various chapters go into extensive detail in relation to each of the sections of the Family Law (Scotland) Act 1985, and it would be hard to find any aspect of financial provision which is not covered.

The pension section, covered under s 8 orders, makes what is generally a complicated subject easy to understand. The chapter on s 9 claims includes a helpful cases section showing successful and unsuccessful arguments.

Apart from the cases annotated in the footnotes, there are also tables of cases at the end of the various chapters.

Due to lockdown, this book has been sitting on my desk to review for some time, and I have to say it is already well thumbed. It provides all the answers to all the questions you did not even know you wanted to ask. It is definitely one for practitioners to carry in their briefcase, and is a must have for anyone dealing in any aspect of family law.

Enemies of the People? How Judges Shape Society 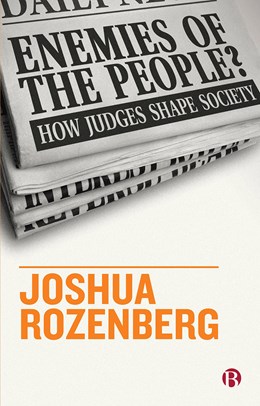 Joshua Rozenberg aptly and judiciously poses the notorious phrase in the title of his book as a question, in contrast to the sensationalist, egregious headline of the Daily Mail on 4 November 2016, following the judgment of the Lord Chief Justice and his colleagues that the Government required the consent of Parliament to invoke article 50 commencing the withdrawal of the UK from the European Union. The phrase has a long history, beginning in Roman times, through to regular reference during the French Revolution, a play by Ibsen, and the President of the United States referring to fake news by certain media outlets. In essence, it seeks to denote the will of the minority frustrating the will of the majority.

Rozenberg has written a highly readable yet sophisticated book. He takes several areas of law where he examines in a clear, erudite fashion the decisions of the courts, contrasting them with the criticism made that those decisions demonstrated judicial activism leading to decisions said to be unwarranted or even unlawful. Inevitably, he analyses the decision delivered by the Supreme Court in Miller v Secretary of State for Exiting the European Union [2017] UKSC 5. However, he demonstrates that in other areas of the law, academics can be vociferous in their criticisms of the senior judiciary.

An example is a statement issued by the Judicial Power Project that “The Supreme Court’s decision today, Privacy International v Investigatory Powers Tribunal, undermines the rule of law and violates the sovereignty of parliament. A majority of the court (four of seven judges) has chosen to misinterpret an ouster clause – the statutory provision which expressly limits the High Court’s jurisdiction to review decisions of the Investigatory Powers Tribunal. Parliament chose to limit judicial review by creating a specialist tribunal to consider complaints against the intelligence services. It is not the Supreme Court’s place to unravel this choice by way of implausible and unreasonable statutory interpretation... It is clear that some Supreme Court judges have a wholly misconceived idea of their place in our constitution... These three judges have asserted an intention in the future openly to disobey statute. Any judge who acted on this intention would warrant removal from office in accordance with the terms of the Senior Courts Act 1981.”

Rozenberg's conclusion is that “In reality, Carnwath, Hale and Kerr were not refusing to give effect to a future ouster clause. They were simply predicting that they might not interpret a clause in the way that lawyers such as [those who issued the statement] were arguing for. The Privacy International ruling shows a clear division between Carnwath, Hale and Kerr, at the activist end of the spectrum, and their colleagues Sumption, Reed and Wilson, who took a more literal approach to statutory interpretation – with Lloyd-Jones somewhere in the middle.”

The author begins with an engaging overview of the overarching framework within which judicial activism can be scrutinised: separation of powers, the common law and how judges can develop the law through its application and interpretation (helpfully picked up in his chapter on the sweeping away of the marital defence to rape), devolved powers and the Human Rights Act. Thereafter, chapters follow a patterned discussion, analysing the case law and the reaction to it.

In doing so, the author clarifies and, for the non-legal mind, demystifies with crystal clear insight, the ratio of the judgments. So, we are given analysis of gay rights, marital rape, Miller, discrimination, press freedom, divorce and assisted suicide. Judge made law is central to the three legal systems of the UK, contrasting sharply with the codified system of most other states. Rosenberg demonstrates how this flexible approach has developed not only the law but its role within modern society.

While not written as a textbook, the book could usefully be read by students to give them an insight into the judicial mind, the approach and considerations judges take in their decision making and the sensitivity and moral courage required to do so. In my early studies we read The Politics of the Judiciary, by Professor Griffiths, who argued that judges can never be truly independent, and The Discipline of Law by Lord Denning, who argued that the principles of law laid down by 19th century judges were no longer suitable to the issues in 20th century society. More recently, Lord Sumption addressed the issue of judicial overreach in his Reith Lectures. Rozenberg gives us a more nuanced insight into Lord Sumption's decisions. Great food for thought.