A unified Land Court: why?

The Lands Tribunal for Scotland is to merge into an enlarged Scottish Land Court. The judge who presides over both bodies answers the Journal’s questions as to the rationale
18th October 2021 | Lord Minginish

Where did the idea for the merger originate?

The idea came from me in a paper I, with the Lord President’s approval, put to the Scottish Government in July 2015, a few months after my appointment as Chairman of the Land Court and President of the Lands Tribunal.

What was the thinking behind it?

This can be summed up in three words: simplicity, coherence and flexibility. Simplicity because it replaces two bodies, which already have the same judicial head and which both deal with land issues, with one. Coherence, in that it resolves certain statutory anomalies and complexities where, presently, both bodies have a role to play in the same or similar processes (for example, the tenant farmer’s right to buy under the Agricultural Holdings (Scotland) Act 2003, and the community and crofting community right to buy under the Land Reform (Scotland) Act 2003). Flexibility in that it allows the deployment of the expertise available in both bodies across the range of the unified jurisdiction.

The two bodies already share a building. Are there efficiencies to be gained from a formal merger?

Both the Land Court and the Lands Tribunal occupy premises on the third floor of George House, Edinburgh. They are very similar in size. The Land Court has a Chairman, a part-time Deputy Chairman, two part-time agricultural members and a staff of four. The Tribunal has a President, a QC who is, in effect although not in name, the Deputy President, two part-time surveyor members and a staff of three. These are very small numbers, given that each body has a Scotland-wide jurisdiction. The scope for cost savings is therefore marginal. Where efficiencies will come is in the way the expanded Land Court will do its business, with the ability to deploy lawyers, surveyors and agriculturalists across the unified jurisdiction.

From a practical point of view, will members still have to be qualified for, and sit on, cases in one branch or other of the enlarged jurisdiction?

While the jurisdictions are different, there are Land Court cases, such as the recent Stornoway Wind Farm Ltd v Crofters having rights in the Stornoway Wind Farm Site, SLC/59/17 (21 July 2021), where the expertise of a surveyor is advantageous and, equally, Lands Tribunal cases (those involving agricultural land) where farming experience is advantageous. While that can be achieved to some extent by appointing the requisite expert as an assessor, that is not the same as that person being a full court or tribunal member. More significantly, flexibility with personnel will enable the Deputy Chairman of the Land Court to be assigned to Lands Tribunal type cases, and vice versa with the (de facto) Deputy President of the Lands Tribunal.

A crucial thing to realise is that, under the new arrangements, the composition of the bench will match the requirements of the particular case and there will be no dilution or diminution of the expertise brought to bear.

The Land Court sits locally to the subjects in dispute whereas the Lands Tribunal operates in a formal court setting. Do they not work in quite different ways?

No. They work in very similar ways. The Lands Tribunal has always worked more like a court than a tribunal: the cases it hears are mainly individual v individual, rather than individual v the state; and witnesses are put on oath and cross-examined as they would be in court. So the Lands Tribunal is a very atypical tribunal, and that is one reason why it makes sense for the tribunal to join the court, rather than the other way round.

As to sitting throughout Scotland, that option is equally open to the tribunal, although it is fair to say that it happens less frequently, due to a higher proportion of tribunal cases coming from the central belt or elsewhere within reasonably easy reach of Edinburgh.

Will any flexibility (regarding place of sitting, procedure or otherwise) be lost by having a larger combined body?

No. The Minister was careful to emphasise that the traditional character of both bodies would be retained in the reformed court. Nobody is more aware of the need to preserve the heritage of the Land Court, if I can put it like that, than
I am and one effect of this union will be to give it a new lease of life, charged with a wider jurisdiction, which makes the name “Land Court” more meaningful. The rich history of the court and the affection in which it has been held, particularly in the crofting community, over its history is another reason why the tribunal (with its shorter history) is joining the court.

Were any significant objections raised during consultation?

As is always the case, public consultation produced a wide range of responses, not all in favour. For example the Faculty of Advocates opposed it, but the Senators of the Court of Session endorsed it wholeheartedly and powerfully.

What is the likely timescale for completion of the merger?

That is in the hands of the Scottish Government. It has committed to legislation before the next Scottish parliamentary election. 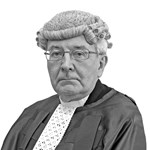