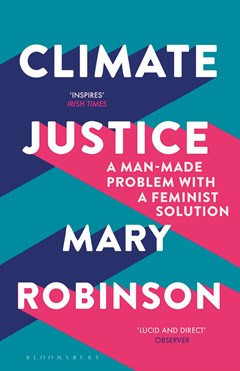 With the UK on the cusp of the COP26 conference in November, why this book should be read should be self-explanatory. Everyone should be interested in what climate justice means for us, not only as the legal profession but as members of the public in Scotland, with the personal and moral responsibilities incumbent on us.

This book seeks to emphasise how climate change will impact significantly and disproportionately on women. Though feminism features in its title, it should be stressed that does not mean excluding men: it is about acknowledging the role that women play in tackling climate change, as the book outlines, with women frequently being in the front line.

Mary Robinson should need no introduction. She is well known to many as a lawyer and the former President of Ireland from 1990-97. Appreciation of her time serving as the United Nations High Commissioner for Human Rights from 1997-2002 is perhaps less well known. That forms the basis for her book; as she acknowledges, the genesis of her interest in climate change was sparked by that role. It is vindicated with her longstanding commitment, interest and support to address climate change.

It is therefore no surprise that she has a mission to secure justice in bringing the urgency of the human rights of those affected by climate change to the fore. Climate change, a manmade phenomenon, most affects those who are the least responsible.

Her book is a mandate for seeking to achieve justice for humanity. It sets out the evidential case for climate change, of which we should be fully aware. She uses grassroots testimony from those most affected, using a now familiar reference to “lived experience”. She presents the experiences of those affected, from hurricanes in Mississippi to the nomadic herdsmen from Kenya, and from the Americas, Africa and Europe. Robinson's presidency did not require her to return to Ireland because her land had become uninhabitable due to climate change. That happened to Anote Tong, the former President in Republic of Kiribati.

The book is set against the backdrop of the arrival of the Trump presidency and the Paris Agreement (12 December 2015), and may now appear slightly dated politically. However, for readers seeking a frank, easy to read book as an initial step to understanding references to climate justice, and the background to and the importance of the Paris Agreement, it is valuable. It can be read in advance of COP26 to understand fully the fragility of the foundation set out by the Paris Agreement, which is the basis for COP26.

Robinson seeks to use powerful and emotive images in the book, such as the birth of her grandson, who will be 47 in 2050. Unless the mantle of climate change is grabbed, and work done now to reverse its effects, there will be no climate justice for our successors to inherit.

This book provides an important start, with its resounding message from Mary Robinson in seeking change to take “personal responsibility for our families, our communities, and our ecosystems”.