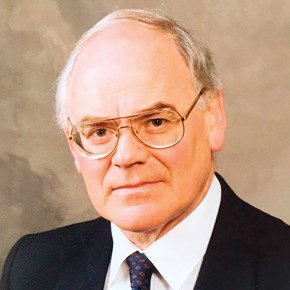 Among the many tributes paid to Bryan it was thought that the local Faculty of Solicitors of the Highlands, of which he had been such an important part, should record its own recognition of and gratitude to him.

Bryan came to Inverness and joined the firm of Anderson Shaw & Gilbert in 1961. He was assumed as a partner and remained there for the rest of his professional life. His workload was varied, including court appearances and chamber practice, and he established himself as one of the leading solicitors in the area. He had excellent advocacy skills and cut an imposing figure in court. He built a large following of devoted clients, in whom he inspired great confidence, treating them with respect and compassion. It became almost a badge of honour for clients to boast that Bryan Longmore was their solicitor.

Fellow solicitors admired him for his intellect and his knowledge of the law. This professional respect extended outwith the immediate area and he was engaged by the Law Society of Scotland to be a member of its “Troubleshooter” taskforce. There are several common themes in the recollections of Faculty members past and present: his absolute trustworthiness, which coupled with his professionalism and ethics outweighed any competitive inter-firm rivalry; his warm welcome to those who were new to the area; his courteous treatment of others as equals, regardless of age or experience. Other agents used him as a sounding board and source of advice and guidance, knowing that he would give thoughtful and careful consideration to their concerns.

In the office he was a dynamic presence, always busy, with two secretaries engaged in producing his dictation. Our offices and ways of working have of course changed almost beyond recognition since he sat behind his traditional partner’s desk, which was far too high to be comfortable for anyone else. Behind him on the windowsill was an additional telephone – the original “direct line” – which he could use when he needed to circumvent the switchboard or to permit certain very privileged parties to contact him out of hours.

To those of us following on, he was generous with his time and knowledge, patient with the inexperienced, and a loyal support when required. We learned a lot by observing his ways of putting his clients at their ease and firmly but politely persuading other agents round to his point of view. He retired in 1995, but remained for many years as a valued consultant.

As well as his acknowledged intellectual ability, he possessed a keen sense of humour which made him excellent company. His pithy remarks at office parties are still recalled by those of us who were fortunate enough to have heard them.

But legal practice was by no means the limit of his endeavours. He had a hinterland. Away from the office he had a very happy and busy family life with a variety of interests. He enjoyed working in his garden and astounding his neighbours with the luxuriance of his flowerbeds. He was involved in many local organisations, where his legal training, coupled with his own natural humanity and his life experience, made him an invaluable adviser.

Perhaps even more importantly, Bryan had a long association with St Mary’s Catholic Church in Inverness. In the words of Father Bell, Bryan became the “paterfamilias” of the community at St Mary’s. Parish priests came and went but, as Father Bell explained at the funeral service, Bryan was a permanent focus of unity. He was “the spokesman, the witty erudite proposer of toasts and farewell speeches… the exquisite insights, the elegant expression and the touching warmth of his sentiments often reducing the listeners to tears of appreciation”.

In 2019, in recognition of his service to the church, he was invested with the insignia of a Papal Knight of St Gregory. Those of us who knew him can imagine how humbly he would have received such an honour, albeit so well deserved. It was this combination of humility and selflessness, together with his innate integrity and wisdom, which made him such an iconic figure in our Faculty, and this is how we will remember him.