Can a traineeship contract be ended early if things go wrong? The Society's head of Education explains whether and how it might happen, and dispels some common myths
18th October 2021 | Rob Marrs 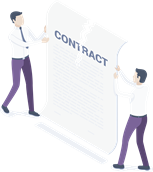 This, I have to say, is a subject that no one really wants to discuss. Everyone going through a traineeship knows that there is a theoretical possibility that a traineeship can be terminated, but whenever their mind turns to it, they shudder and move on to happier thoughts.

Even with that in mind, I’ve decided to take a deep dive here. Why?

Well, I am one of the voices on the phone that speaks to trainees or trainers who call looking for guidance when traineeships become a little tricky. I reassure you that these calls are not frequent, and those looking to end a traineeship are less frequent still.

However, one thing I am alive to from those conversations is that there is a bit of a misconception as to how and why training contracts can be terminated, who has the power to terminate the training contract and what the role of the Society is. I hope this article can put minds at relative ease.

First, despite rumours to the contrary, the only organisation that can terminate a training contract is the Law Society of Scotland, via the Admissions Subcommittee (more on which in a minute).

Secondly, actual terminations of training contracts are very rare. At any one time, there are likely more than 1,000 traineeships ongoing around Scotland. Over the last year, I doubt that more than 10 traineeships have been terminated – less than 1% – and a number of these were due to the extreme financial difficulties some firms found themselves in because of the pandemic. Given that the last 18 months have seen the profession face its greatest hardship in living memory, such a percentage is remarkable.

Who are the Admissions Subcommittee?

You can find more information on the Society’s website, but essentially the Admissions Subcommittee is a regulatory subcommittee of the Society, comprising a balance of lay people and solicitors. As part of their role, they look over any submission from an employer or an employee to terminate a training contract.

Our general view is that training contracts should be completed and the overwhelming majority are completed at the 24 month stage.

In the rare occurrence that either party seeks to terminate a training contract, we are at pains to explore every option to avoid that outcome prior to the Admissions Subcommittee considering this.

Let’s look at some examples about when we might be asked to act.

If an organisation contacted us noting that it was seriously concerned about the financial health of the business and it thought that one of the ways to keep the business afloat was to terminate the training contract of a trainee, we would talk through options with the employer. Could the trainee be assigned to another training organisation? Could the trainee work part-time? If all else failed, the matter would go to the Admissions Subcommittee for consideration. In my experience, employers really do want to try and look for any other option and will often assist trainees in trying to assign a training contract.

An employer contacts us about the performance of their trainee at, for example, month 13 of the training contract. The previous two reviews have been below the standard of the training contract and the trainee – despite additional support, mentoring and training – is not improving. We would discuss with the employer a number of performance management techniques, including additional reviews, reduced workloads, briefings and debriefings, moving seat (if possible), a change in management style and approach, changing supervisor, changing the nature of work etc, and ask the employer to consider more time (e.g. to the next PQPR) before requesting anything of the Admissions Subcommittee. Usually when a trainee is underperforming, with hard work on both sides they get back on track and no request is made to the subcommittee. That said, there are rare occasions when a trainee – even with additional support, guidance and assistance – will not meet the PEAT 2 outcomes.

If a trainee contacts us wishing to terminate their training contract, we will talk them through every option, including potentially assigning their traineeship to another employer prior to any request to the subcommittee. Why might a trainee contact us? Two reasons include that they think they aren’t getting trained as they might like, or there are relationship problems with the supervising solicitor.

The examples given above are just that; they aren’t exhaustive. There may be other times where the Admissions Subcommittee is asked to intervene or make enquiry.

The Admission Regulations make clear that the Society may make enquiries concerning any matter relating to performance or obligations under a training contract, including the conduct of the parties. They also note that the Society may require parties to the contract to produce evidence regarding those enquiries.

Consideration of a termination would only ever occur after those processes were complete. Sometimes, however, we must acknowledge that, despite our efforts and the efforts of the employer and trainee, a request will be referred to the Admissions Subcommittee.

When that does happen, the subcommittee will ask for a clear explanation as to why the request is being made, and the views of the other party. It will ask the employer what time credit should be added to any future traineeship (usually employers credit the trainee with the precise period they’ve spent training, but there may be exceptions).

It should not be assumed that just because one party has asked for the training contract to be terminated, it will be terminated. I’m aware of cases where the subcommittee has refused to do so.

I should note that some calls from trainees to the Society do refer to their mental health.

We treat any such references with the utmost seriousness, and will always point people towards the following three sources:

When someone notes that they have such health concerns, we highlight to them that there are provisions within the training contract to take time away from work which may not impact the length of the training contract. Even with this advice in mind, it may be that a termination is still requested by the trainee, and the subcommittee would consider any such request very sensitively. Simply put, health absolutely always must come first.

When all else fails

Sadly, there has to be a mechanism to end a training contract. Sometimes, employers find themselves in such dire financial straits that they have to consider options that would normally be unpalatable.

Other times – and extremely rarely – trainees simply aren’t performing at the requisite level and won’t ever do so. In such instances we expect to see evidence from the employer that it has taken all steps to try and help the trainee towards the PEAT 2 outcomes. Similarly, and even more rarely again, sometimes a trainee does something that is a clear breach of their obligations. In such instances – after investigation – it may be viewed by the Admissions Subcommittee that they are not a fit and proper person.

And, yes, sometimes there is simply a catastrophic breakdown of relations between a trainer and trainee where they can no longer work together. In larger organisations this may be managed via seat moves simply because there are other seats available and other supervisors, but in smaller organisations that can be more difficult. Again, I’d stress that we are talking about a handful (at most) in every 1,000 traineeships that end up at that stage.

I have stressed throughout that terminations of training contracts are rare. They really are.

And each of the situations above is rarer again. The overwhelming majority of trainees complete their traineeship at 24 months and their only involvement with the Society is our automated PQPR reminders.

In the circumstances where things do go wrong, our goal is always to see if we can get things back on track, either at the current employer or assigning a traineeship to somewhere else.

I can guarantee you though that, when these matters do come to us, we treat them with sensitivity, respect and an understanding of just how important this is to all involved.