This is a novel set in post-Reformation Scotland. Queen Mary has fled Scotland and her son and heir, Jamie Saxt, is under protection in Stirling Castle. John Knox is dead. Into this mix of cultural, political and religious upheaval comes Will Fowler as a new student at the University of St Andrews, where the streets are marked with the scorch marks of martyrs' pyres and danger lurks around every corner. People are frightened to speak their minds for fear of being imprisoned or banished.

The thread of the story centres on Will Fowler's journey from St Andrews, back to Edinburgh and to London and Paris. This journey sees him make friends and enemies, and his dirk is never far from his hand. In his early days at university he befriends Tom Nicolson, son of a fishing family, whose sister, Rose, is a free-thinking, independent woman to whom he is drawn. Their relationship threads through the novel, and their individual stories are told in a vivid manner by the author with a good use of old Scots – the book contains a useful Scots guide for those not sure of any term used.

There are also descriptions of golf (gowf) in the 16th century, which is described as being “only a game” and a “sport beloved of Presbyterians, who like their pleasures hard-won”. During an induction to the game, an old worthy advised his student to “Dinna press, heid still and slow back”. This advice is commonly heard on the St Andrews Links!

The author's use of language facilitates a dry humour that runs through the story while carefully describing the extent of the upheaval caused by the Reformation. Scotland was not a safe place. One sentence describing an encounter on a summer's evening in a wood states that “An owl enquired Why, Who? From the woods across the river.” Another scene is described through Rose's eyes as: “I came to know we are twa-fold, keekin within and keekin without. We witness our life even as we live it.”

I recommend this novel as it contains something for everyone. It is a good, well told story, and a history lesson to boot. For the record, William Fowler (c1560-1612) was a Scottish poet or makar (royal bard), writer, courtier, and translator. He lived a colourful life. 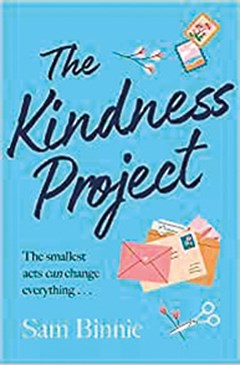 Alice is an academic historian, organised and aloof initially. Her mother's death takes her to Cornwall, where she faces the practical task of clearing the house, but in addition, she is presented with a series of challenges relating to her new neighbours. As she reluctantly finds out about those around her, so we find out about Alice and the issues she has carried with her for many years.

There are so many strands to the story it would have been easy to lose sight of where the characters were going, but Sam Birnie does no such thing. Each person's tale is told, and we come to see how the actions of others influence our lives and how important it is to communicate clearly with those we encounter. By the end of the first chapter I was hooked, keen to know more about Alice and the Cornish villagers. But this is not just a chick lit seaside romp with pretty scenery. The author brings in difficult issues: bereavement, marital breakdown, mental health and anxiety. She deals with them all credibly and yet, despite sad circumstances, the book is an encouraging and uplifting read. It confirms the fragility of life, yet reminds the reader that even those things which seem impossible in the wee small hours, can be tackled and achieved in the light of day. Running away is rarely the answer. Friendships can sometimes be the only answer.