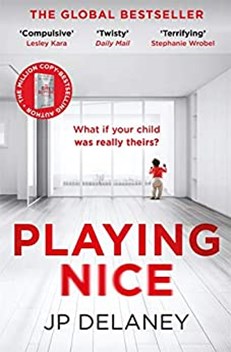 If you are a parent, prepare to confront one of your worst nightmares. You are playing happily with your two-year-old son, your only child, your pride and joy, when the doorbell rings. You are confronted by a stranger and his private investigator. They provide you with proof that your son isn't yours: the stranger is his father. Two children, it appears, have been mixed up in the neonatal unit.

But never mind. The strangers are pleasant. They are looking to resolve this in a civilised manner, to play nice, as per the ungrammatical title of the novel. Pete and Maddie, recipients of the unwelcome news, have a few issues of their own. Pete, a struggling journalist, has assumed the role of house husband. He's a dedicated father, but there are financial issues, and Theo, the son, isn't the easiest of children. On the other hand, the stranger, Miles and his wife Lucy, seem to have it all. Charm, looks, money. We can relax as together they find a way ahead.

You can guess that it wouldn't be much of a novel if the plot were to end there. You probably can't guess that the book features more circles of hell than Dante could ever have imagined. All you can do is hold on tightly to your copy as Pete and Maddie's life goes into freefall. You will want to carry on reading to find out what happens when everything lands.

Well, you'll get not even a hint from me, save this one. Playing Nice is the most terrifyingly gripping book I've read in a long time. 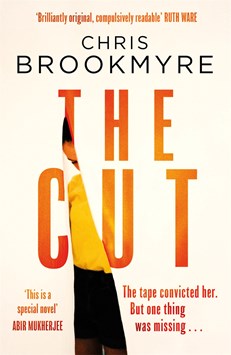 This is page turning murder mystery, with a light sprinkling of humour. Jerry, a first year film studies student, has been accused by his contemporaries of theft of a mobile phone. He comes from the “wrong side of the tracks”, and the moniker has stuck. His gran wanted him to do well. He finds an ad for a room to rent in the West End. The house is occupied by three elderly woman, owned by a retired lecturer. However, one of the women, Millie Spark, is slightly out of kilter with the others.

Is she just odd, or is something else at play? She was a makeup artist in numerous bloody, violent films and developed many new techniques to create realistic effects. By happenstance, Jerry is deeply interested in this genre. There is an as yet unknown, fatal link between them which is tantalisingly held back by the author. After an unfortunate incident which sees a man die in his pursuit of Millie, she and Jerry take off for France. There follow numerous lookings-up of old friends and acquaintances to uncover the truth of why Millie is now being pursued so many years later. Written with Brookmyre's inimitable style, this book is thoroughly enjoyable and one to savour over a couple of sun soaked summer afternoons.

This is historical author David Scarrow's first venture into Nazi Berlin, a departure from his well known books set in the Roman period. Based on true events, this novel charts the attempts by Kriminalpolizei Inspector Schenke to trace the person responsible for the rape and murder of a former film star with whom Goebbels had a dalliance. The SS assigns the case to him, and immediately he questions what motives are at large: why pass to the Kripo; why him; is there any transparency or is he being played? Another similar event occurs but the victim survives, with a tentative identification.

But there's a twist. The murders occur during the blackouts beginning to be more frequent in the Berlin of 1939. Added to this rich mix of intrigue, Schenke is in love with the niece of Admiral Canaris, the head of the Abwehr. Canaris seems to know more than he should. How? Why? Intrigue builds upon intrigue. Fast moving, with occasional twists and turns, this is a book to be enjoyed, one that gives us a new voice in an already busy field. Schenke declines to join the SS. Let's hope we follow him on his tightrope walk of remaining an ordinary police officer, with no allegiance to the party but on whom the head of the SS has an eye.