Colin Cameron, the Society's newest honorary life member, was a pivotal figure in achieving Malawian independence and has continued to support the country's people. This is his story
19th July 2021

How did he become involved with Malawi? 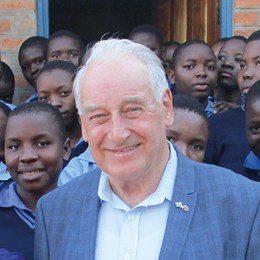 Colin Cameron was born in 1933 and educated at Uddingston Grammar School, where he was Dux and Head Boy in 1951, and the University of Glasgow. Qualifying in 1957, he married Alison Spittal, a registered nurse and midwife, and left Scotland to take a position with a legal firm in Malawi (then Nyasaland), as a way to earn a salary with which he could afford to marry. The couple spent their honeymoon on the SS Braemar Castle to Beira in Mozambique via South Africa. Having little knowledge of apartheid before they left Scotland, both became thoroughly disillusioned by their experiences of the regime in Cape Town, East London and Durban.

Arriving in Malawi, Colin took up his position while Alison began voluntary work as a midwife with the then Church of Scotland African Mission Hospital in Blantyre. Colin began teaching English at a local African night school and also helped set up organisations such as the Nyasaland Youth Hostel Association. He became a scoutmaster at a school for coloured children.

Both became very unhappy with the apartheid practices which were apparent and practised in all walks of life in the then British protectorate, and the effects of the imposition of the Federation with the then Southern Rhodesia and Northern Rhodesia against the wishes of the people. Colin began taking an active interest in and support of the Nyasaland African Congress, and working with their leaders such as their former President, T D T Banda, prior to the return to Nyasaland of Dr Hastings Kamuzu Banda.

When Dr Banda became President of the Nyasaland African Congress, Colin attended many of his rallies and became actively involved in the mass movement for secession from the Federation and the achievement of independence. By that time Colin and his family were to all intents and purposes ostracised by the white community (apart from some missionaries), due to their close association with the local people, but they also maintained a strong connection with the Asian communities both Hindu and Muslim.

What was his role in Malawian independence?

By 1959 the political climate had reached fever pitch. The Government declared a state of emergency and outlawed the Nyasaland African Congress. Hundreds of Malawians were arrested and sent to detention centres. The British and Nyasaland Government decided that there should be a defence organisation to look after the interests of those detained and appointed Colin, as secretary of the Nyasaland Law Society, to organise and implement their defence. Unknown to them, Colin was a member of the banned organisation as he defended cases throughout the country. At the same time he organised publicity in the UK and elsewhere as to what was really happening in the country.

When his contract of employment ended in 1960, Colin returned briefly to Scotland, but was then invited by Dr Banda to stand in forthcoming elections, with his support. He was successful and was appointed by Dr Banda as the Minister of Works and Transport in the first cabinet. He also took part as a delegate at the Marlborough House Conference, London, when the future independence of Malawi and its constitution were successfully negotiated. He was then given a portfolio covering postal and telecommunications, and road, rail and air transport, setting up new transport companies prior to independence. He also represented Malawi in other independent African states.

How did relations with Dr Banda break down?

Shortly after independence in July 1964, Dr Banda, without discussion, introduced a fundamental change to the independence constitution to allow detention without trial to be part of the normal law of the country. Colin resigned from the cabinet on this issue. Other ministers took the view that this should not be challenged until the bill came before Parliament, which Colin believed would be too late – as it proved. A cabinet crisis erupted in November in which Colin attempted unsuccessfully to mediate. Law and order broke down and people critical of Dr Banda were picked up and killed. Only by good luck did Colin escape. He and his family were put under 24 hour armed police protection until they were deported from the country the following day, leaving behind all their possessions.

What happened after his return to Scotland?

Colin resumed legal practice as an assistant, first in Elgin and then at Cumbernauld and Irvine Development Corporations, before setting up his own practice in Irvine in 1970. He served on the Society’s Council between 1976 and 1982. He and Alison became guardians to numerous Malawian children in exile in the UK. In addition he distributed throughout the UK literature of the rebel ministers from Tanzania and Zambia in an effort to support their cause.

Alison and he volunteered for VSO work in Africa, outwith Malawi, but this was declined on security grounds as Dr Banda was still in power. They were posted to the Province of Malaita, Solomon Islands, where they served as a midwife and lawyer as they had done in Malawi some 32 years earlier.

In July 1994, multi-party democracy was restored in Malawi and the Camerons were invited to return after their 30 year exile. The new President, Dr Bakili Muluzi, offered Colin the position of Honorary Consul for Malawi in Scotland, which he held for the next 15 years.

What is the Scotland-Malawi relationship?

In 2005 the then First Minister of Scotland, Jack McConnell, and the President of Malawi signed a Co-operation Agreement in Edinburgh between the two countries. Colin, as Honorary Consul was very much involved in this. A Scottish-Malawi Partnership co-ordinates the very many links and twinning arrangements between churches, schools, hospitals, towns and districts in both countries. Alison and Colin worked actively to promote these under the overall authority of the High Commissioner for Malawi in London.

In 2011 Alison and Colin made a return journey to Malawi on his retiral as Honorary Consul and both have remained active in supporting Malawi in various charities. Alison took a particular interest in the education of girls in Malawi, and became and remains patron of the Mamie Martin Fund.

In 2017 the Malawi Government invited Colin and Alison back to Malawi for almost certainly their final visit, providing hospitality and travelling expenses. It also honoured Colin by presenting him with a Malawi Medal of Recognition for his involvement over the decades. The Scottish Government also awarded Alison two instalments of £50,000 each, which were used to assist the Mamie Martin Fund. They are known in Northern Malawi as “the Alison girls”. Alison and Colin are now retired in Irvine but keep an interest with Malawi, mostly on a personal basis.